Update:Darker Graceful and Other Changes

This week's update adds some of the changes from Poll #72

Darker Graceful and Other Changes

We're right out of the gate this week with some of the changes you voted on in Poll #72. Let's take a look before they speed right past us! 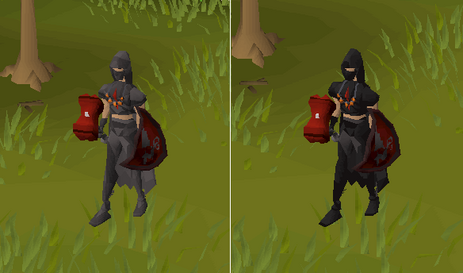 In what is surely the most monumental change of the poll, we've made the Dark Graceful set even darker. Now it's perfect for blending into the shadows as you skitter across Gielinor's rooftops.

In another chromatic twist, the colour of the Saradomin Halo, obtainable from Castle Wars, has been changed to match the god's blue colour scheme.

The 'Empty' option on the Gem Bag has been replaced with an option that will allow you to transfer all gems to your Inventory at once, starting with sapphires.

Composting snape grass will now get you supercompost instead of the regular stuff. Hooray!

While we were adding this update, we noticed that certain herbs, when clean, will decompose into supercompost, but will turn into regular compost if left grimy. Following today's update both clean and grimy versions of the following herbs will yield supercompost: