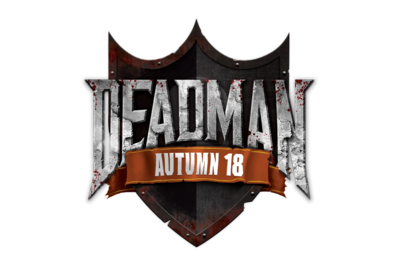 Now that the logistical information has been shared, it's fitting to inform you all of what the Autumn Finals has in store for you. The rest of this page will be split into displaying the core content mechanics, and then finally the way the Permadeath (the final hours of the Finals) will be played.

The purpose of this section is to detail any major changes from the previous tournament, the Deadman Winter Finals.

Some new changes for the Finals include:

The Ancient Warriors equipment are tradeable and do not degrade. The following items will be included for the entire Autumn Finals: 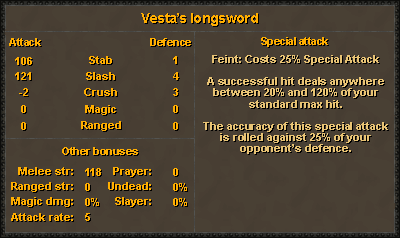 Vesta's longsword requires 78 Attack to equip and is one-handed. 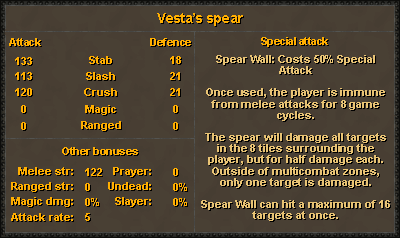 Vesta's spear requires 78 Attack to equip and is two-handed. 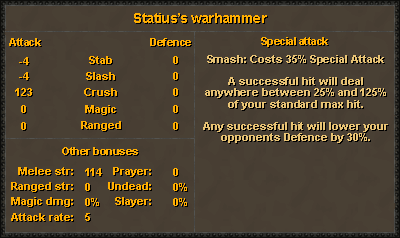 Statius's warhammer requires 78 Attack to equip and is one-handed. 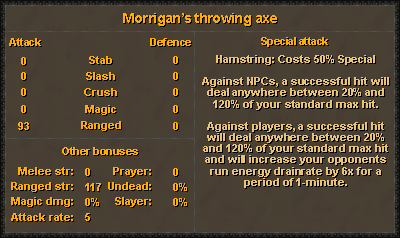 Morrigan's throwing axes require 78 Ranged to equip and are one-handed. The amunition saving effect of Ava's devices do not work with the axes. 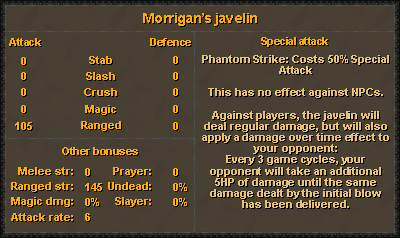 Morrigan's javelins require 78 Ranged to equip and are one-handed. The amunition saving effect of Ava's devices do not work with the javelins. 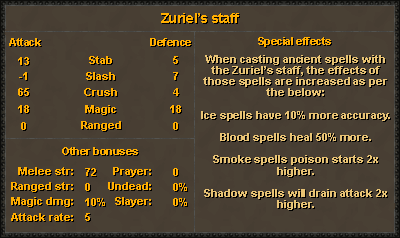 Zureil's staff requires 78 Magic to equip and is one-handed.

Verac's flail is no longer a possible reward from the Barrows chest.

The size of the Quarter Final and Semi Final arenas used in the 1v1 stage of the Permadeath stage has been increased to match that of the Final arena.

The requirement for completion of Hand in the Sand to access The Magic Guild Store has been removed.

Starter kits will now be cleaned up (alongside other food items) when in the 1v1 stage of the Permadeath stage.

The requirement for having started Dragon Slayer to equip or use anything-Antifire has been removed.

We've also improved the droprate of all defenders. The drop rate of each defender, including the Dragon defender, is now 1 in 25.

The Dorgeshuun crossbow and Bone bolts will be added to the Varrock Archery Store, Catherby Fletching Store and the Ranging guild’s bow and arrow store.

The following quests will be automatically completed: Animal Magnetism, Death Plateau, Dragon Slayer, Heroes' Quest, The Lost Tribe, Monkey Madness, and the first stage of Recipe for Disaster. The following quests which are a requirement for these quests will also be completed: Cook's Assistant, Priest in Peril, Ernest the Chicken, Restless Ghost, Animal Magnetism, The Grand Tree, Tree Gnome Village, Monkey Madness, Dragon Slayer, Goblin Diplomacy, Rune Mysteries, Lost Tribe, Death Plateau, Shield of Arrav, Lost City, Merlin's Crystal, Druidic Ritual (and level 3 herblore), Heroes' Quest, Recipe for Disaster: Another Cook's Quest (Part 1 which unlocks the chest). It will not be possible to gain the XP you would normally receive for completing these quests.

Teleblock will now last for 150 seconds, or for 75 seconds whilst Protect from Magic is active.

High level guards patrol major towns across the map keeping them safe. If they spot a player with a PK skull they will attack them. The map below is an approximation of the map changes within Deadman Mode. The areas highlighted in green on the map to left are the safe areas. The areas highlighted in red on the map to left are multi-way combat areas. 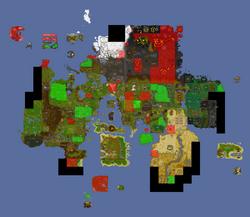 Players will be teleported with the gear, stats, and supplies that they left the mainland with. Once teleported, to the arena they will have the opportunity to access their bank chest. Players will be able to access their bank chest for 10 minutes, and this is the only opportunity they'll have to bank throughout the arena section. This bank chest also carries the option to change your spellbook.

Players who are successful at progressing beyond the first Arena will have their inventory wiped of supplies (food and potions) and for each fight thereafter we'll restore all health/stats/special attack, as well as resupplying inventories. The supplies will consist of the following, also note that if your inventory is full then any excess supplies will appear on the floor:

In response to the issue which caused approximately 160 players to experience a simultaneous logout, we announced that there'd be a clear player-facing contingency plan in place ahead of the beginning of the Finals. We have made a number of changes to the mechanics of the Permadeath stage which have been designed to ensure that we're able to take any action that we deem necessary.

You should have a back-up connection available. An easy back-up connection can be in place by using the mobile data on your mobile device, and tethering your PC to that mobile connection. This back-up is a viable solution to not only attacks against your IP, but also against other connectivity issues.

If you suspect that your IP address has become compromised, it's recommended that you contact your ISP. The majority of ISPs will change your IP address at your request. Find a customer service or technical support contact at your ISP and ask for a new IP address. If, for some reason, they will not help you change your IP address, you can attempt to force an IP change by unplugging every PC, router, modem, or other network hardware and computer from the internet for a period of 24 hours. If all of this advice doesn't yield any results then we'd recommend playing for the entirety of the Finals using your back-up connection (and sourcing a secondary back-up connection).

In response to the issue which caused approximately 160 players to experience a simultaneous logout, we have made a number of changes to the mechanics of the Permadeath stage.

What We Will Do

The changes in the section above are to help us enact the steps detailed in this contingency plan, should the situation arise.