The changes have been live on their relevant Deadman pages on the Old School website, but here's a compiled list of information for you.

For a full overview of Deadman Spring Finals content please visit the Spring Finals Deadman page. For ease of reference here is the changelog:
Item Changes

The location of the Supply chests has changed (see the map below). Once the lethal fog warning has begun, you'll be able to see in-game where the chests will spawn. The items are the same as in the last tournament, but the ordering is different. We won't reveal the order ahead of the tournament, but you'll be notified in the chatbox as with the Winter Finals. 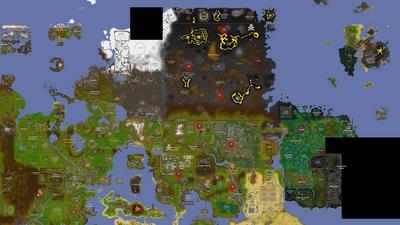 We have changed the manner in which fog operates before the arena section. Anybody who is stood in the lethal fog once it jumps will be instantly killed. Anybody entering the lethal fog when it isn't jumping will be hit for increasing damage for the longer they're stood in the fog. Anybody who ignores the increasing damage and travels further into the lethal fog will be instantly killed. Generally speaking, the changes are kinder to those who happen to find themselves accidentally entering an area which is covered by lethal fog.
Final 1v1 Permadeath Phase

The bank chest accessible within the 1v1 stages has a Venerate option which will allow you to change your spellbook.

Phoenix necklaces correctly act as food in the 1v1s, meaning they will be removed when your inventory is replaced.

We have changed the manner in which fog operates during the arena section. All rounds up to (but not including) the Semi-Final stage (four players remaining) are given 5 minutes to fulfil their 1v1 fight, after the 5 minutes are up a damaging fog will fill the arena hitting each individual for 5s. For the Semi-Final and the Final, this arena fog is manually activated. Once activated, players will receive a 30 second warning, and then it will hit each individual for 5s. 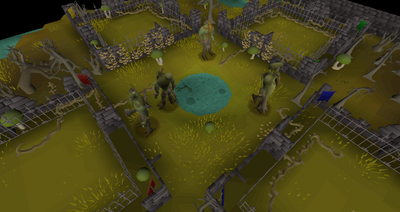 The appearance of the arena section of the Permadeath Stage has been edited to reflect the seasonality of the Spring Finals.

For a full overview of Deadman Summer Season content please visit the Summer Season Deadman page. For ease of reference here is the changelog:
Swapping & Muling

The act of muling during the Summer Season is prohibited, and is a bannable offence.

The act of swapping during the Summer Season is prohibited, and is a bannable offence.
Starter Packs

Starter packs will be available, each reclaimable once per day. They cannot be used in PvP. They are not tradeable, except where specified. For the contents of the starter packs, see the Other Misc. Changes section.
XP Caps & XP Locking

The daily XP cap for Magic has been increased to 750k. No other caps have been changed.

Players will have the ability to lock (and unlock) xp gain in specific skills.
Increased Resources

Pyramid tops, found atop the Agility Pyramid, will turn to cash upon death.
Immunity

There will be a period of 30 minutes immunity at the beginning of the Summer Season. This is server-wide immunity, and not specific to accounts.

We're really excited for the upcoming Deadman Spring Finals, starting tomorrow, and the sebseqequent[sic] Spring Finals: Permadeath stream on the 17th March. We'd like to thank you for the changes you suggested and we hope that the changes made to the Finals and Season will make Deadman even better.

Get involved with all the Deadman Spring Finals action over on Twitter using #DeadmanSpring and make sure you don't miss the Permadeath stream on Saturday 17th!