Deadman Mode is designed to be a high risk and high reward gaming mode where your survival is based on how honourable you are in an environment which encourages dishonour.

Head over to the forums and give the deadman mode developer blog a thorough read to learn more.

As always, we are looking for all the feedback we can get. Let us know exactly what you make of deadman mode.

Deadman Mode is designed to be a high risk and high reward gaming mode where your survival is based on how honourable you are in an environment which encourages dishonour.

We saw how popular Ironman was and Deadman mode will give you another unique… but more deadly way to play Old School. Members will be able to play on a dedicated Deadman Server using their existing account and experience the dread you felt when you first entered the Wilderness everywhere.

You will be able to attack any player you meet anywhere. However, if you get skulled you won’t be able to enter a safe zone without being killed by the guards until the skull has gone. Mind you, if you kill the player you will get to raid his bank… so is the reward worth that risk? And what happens if he kills you? If he kills you he can raid your bank and you’ll lose half of your XP… that’s a tough decision!

The green areas on the below map will be safe zones. 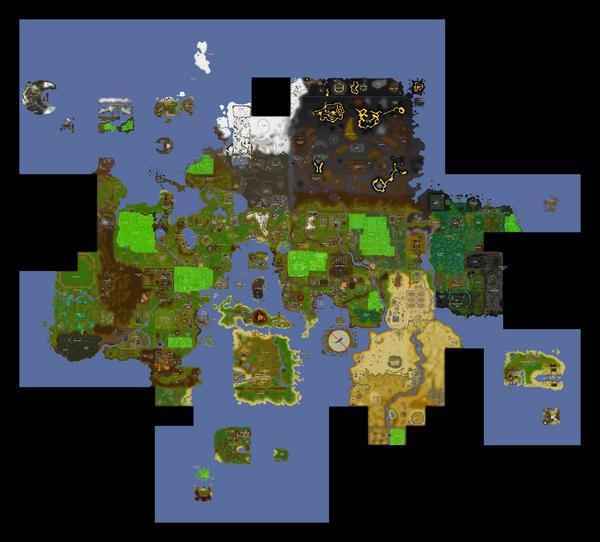 • When you die you will lose 50% of your XP. • You can protect up to 5 skills at a time so you don’t lose any XP in these skills. (limited to 2 combat skills only) • When you are killed by a player, they will be able to raid your bank for one inventory worth of items. • You will be able to insure your items so they can’t be raided, however if you die when wearing them they will automatically drop on the floor. • You will receive 5 times the XP you normally would.

Deadman mode will have its own hiscores so you can see how good you are, don’t forget though, you can go down the hiscores as well as up them. You will also be able to track the total amount of times you have been killed, how many people you have killed and the highest score you have reached.

This game mode takes Old School to a darker level where you can’t trust anyone and your best friend can become your enemy at a moment’s notice.

The next step is for you to give us your feedback on this design and then we can poll the update. Also, just a quick note of Ddossing, we won’t be releasing Deadman mode until the improvements to our network are completed.

You are all dead men walking.

[Edit] - We have made a few changes to the dev blog, in particular we have reduced the amount of safezones and limited the protected skill so that only 2 can be combat skills.

The safe zones have been chosen as there are already guards in that area and it makes sense for that to be translated over to Deadman mode. We have also removed safezones around any efficient levelling area. We have also included a safezone at Port Phasmatys and Menaphos as there needed to be some in those quarters of the map and those areas seem to fit the bill best.

With regards to potential ragging that the community is worried about, when a player skulls on another player they will keep the skull for a longer period of time. As well as that, if you attack a skulled player, you will not skull yourself.

This will have the impact of making it even more dangerous to attack another player as a player with a skull becomes much more of a target.

A further edit is that you will now be able to play Deadman Mode on your existing accounts if you are a member for no additional fee.