The developer blog for content poll #23 is now available over on the forums. This blog goes over questions regarding in-game polls, the Bounty Hunter target system, super combat potions and more.

Click here to check out the developer blog and make sure to leave us some feedback.

This developer blog will run through some of the poll questions that will be found on content poll #23 which will be starting on Wednesday 6th August and running until Wednesday 13th August.

We've been running a survey about letting you vote in polls from within the game, rather than going via the website. The survey's still running, but so far it's looking like there's a lot of support for the idea - at the moment, over 80% of voters would like the option of voting in-game. The website form would remain available for players who prefer it.

It's not just about convenience. By bringing the poll form into the game, we'd be able to do things that the website currently doesn't support. For a start, we'd be able to post links to illustrations or other useful information, to help ensure people know what they're voting about.

We'd also be able to change how the results calculation works; in future we could add an Abstain option to the polls, then calculate the Yes/No percentage from just those people who've voted Yes or No. The website poll system simply doesn't offer that sort of flexibility. In-game, we could even avoid the issue where the website rounds values like 74.5% up to 75%, making the results look ambiguous.

As a little bonus, the in-game poll results page would be able to show what choices you made when you voted in the poll yourself. 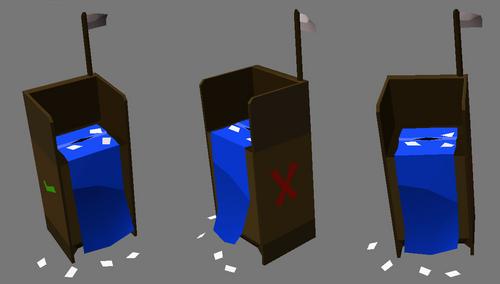 From the survey, it looks like the most popular way of offering in-game polls is to add poll booths. Alternative suggestions, such as putting the menu on characters like Town Criers, or on an item, or a new button, have received far less support.

So what we're offering is to add poll booths to most towns and cities across the world, placing the booths in the vicinity of the bank buildings so that players can access them, but without making them too obtrusive. The booths would offer a menu for voting in whatever poll is running at the time, and would also let you browse the results of old polls. The website form would remain available for players who prefer using it.

If there's a poll running in which you haven't yet voted, and you're eligible to vote in it, the game would send you a little message when you log in. It'd appear in your chatbox, like the "Welcome to RuneScape" message, without any form of pop-up.

Question: Should we add poll booths to the game world so that players have the option of voting either in the game or on the website?

The Bounty Hunter target system is a simple game mechanic that challenges a player in the wilderness to take out a specific opponent.

We are proposing that the target system is added to the wilderness on one world in order to draw people to that world and create an active PKing environment.

It is entirely optional whether or not they chase their target, so if they wish they can just PK as they usually would.

If you wish to read about the Bounty Hunter target system in more detail check out the recent developer blog.

Super combat potions are created with a super attack, super defence, super strength and torstol herb. They would require 90 Herblore to create. The super combat potion would function as a standard super set combined into one, handy potion.

Super combat potions would be tradeable.

Question: Should we add the ability to create a tradeable super combat potion from a super attack potion, super defence potion, super strength potion and torstol herb that provides no additional stat boost? The potion would act as all three potions combined into one, saving inventory space.

We are proposing that the special attack be changed so that if you're in the middle of being shoved, and a second attacker tries to shove you while the first Shove is still in effect, the second attacker's Shove would be ignored. You would be immune to getting shoved until at least one tick after your last Shove ends, so that players cannot be completely disabled for significant periods of time.

Question: Should Recipe for Disaster gloves be converted to an appropriate amount of coins when lost on death?

If you're casting the Superheat spell or the Enchant Jewellery spells repeatedly, and you go a bit too fast, the game ignores you. Last year, we updated the Alchemy spells so that your next Alch casting would be queued up to run after the last one finished. We've been asked to do this for the Superheat spell and the 6 Enchant Jewellery spells too.

The rate at which the spells can be cast would not be affected. Only one casting could be queued at a time.

Question: Should the Superheat and Enchant Jewellery spells be updated so that if you cast them too fast, one casting is queued up to run when the last one's finished?