Content poll #37 will be opening on this Thursday and we've got a lot planned. Skill cape perks, max cape stats and lots more!

Be sure to head over to the forums to take a look at the developer blog for content poll #37'!

Content poll #37 will be in a poll both near you this Thursday and we have a lot planned. Skill cape perks, additional max cape stats and lots, lots more!

Since their release, skill capes have been a great way to show off your accomplishments in RuneScape. We would like to offer some perks that would also come along with the capes to give them some practical applications around the game.

Since the arrival of the max cape in Old School we've seen a lot of requests for the stats of the cape to be improved to make the cape a viable option in more situations. We would like to offer a way to make the max cape more useful.

We would like to make it possible for your max cape to consume fire capes, Ava's accumulators and god capes. When a cape is consumed the stats of your max cape would match those of the cape that was consumed. The colour of your max cape will also change to one of three colours, depending on the cape you added.

It is important to note that, in the event that the skill cape perks pass the poll, only the default max cape will provide the perks. If you have your max cape consume any other capes the perks will be lost in exchange for the different stats.

We would like to offer a way for you to gather Zulrah scales without having to take on the snake itself: swamp eels. Swamp eels require 87 Fishing to catch and 72 Cooking to harvest Zulrah scales from. They are caught using a fishing rod and bait.

In 2007 a change was made to the appearance of mining rocks (clay, tin, copper, iron, coal etc) in RuneScape. Most rocks in game currently have the updated appearance. 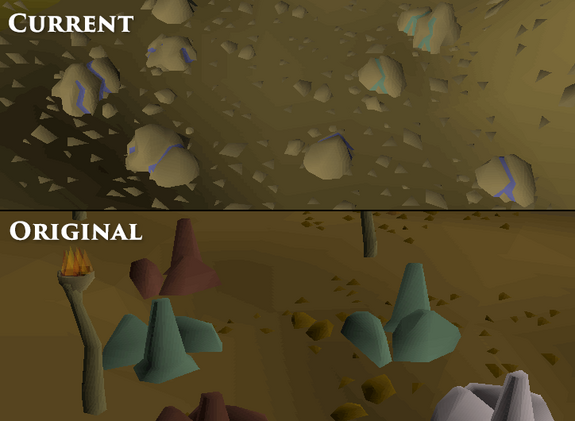 We have recently seen a number of requests for the appearance of all mining rocks around the game to be reverted to how they originally appeared prior to the change in 2007. We will be offering this change with content poll #37.