Now that we've released the bare-bones Trading Post for which you voted earlier this year, and you've had a chance to get to grips with its current form, it's time to look at ways you'd like us to expand on it. In this blog, we'll look at some of the most popular requests that we can offer.

Head over to the forums to give the developer blog a read and let us know exactly how you feel. Your feedback is key in deciding how we move forward with the Trading Post.

Now that we've released the bare-bones Trading Post for which you voted earlier this year, and you've had a chance to get to grips with its current form, it's time to look at ways you'd like us to expand on it. In this blog, we'll look at some of the most popular requests that we can offer.

Let us know which ideas you like, or which ones you'd hate, or what other ideas you'd prefer instead. In the New Year we'll run a poll with options to introduce the most highly requests features and allow the community to decide what direction we will be taking with the Trading Post.

Turn it into the Grand Exchange

First, let's look at the biggest option: turning the Trading Post into a Grand Exchange. This would be a fully functional Grand Exchange like RS3 players have, including price tracking and offline trading. We would not introduce any of the unbalanced trade restrictions that accompanied the original GE launch in 2007; players would still be able to trade freely through the manual trade screens.

In the trading update poll, offline trading was a relatively unpopular feature. Over 50% of players voted against being able to trade with someone who'd been offline for 6+ hours. Nevertheless, we are able to offer you a fully-featured Grand Exchange, and if that's what you'd like us to put in a poll, we will offer it. 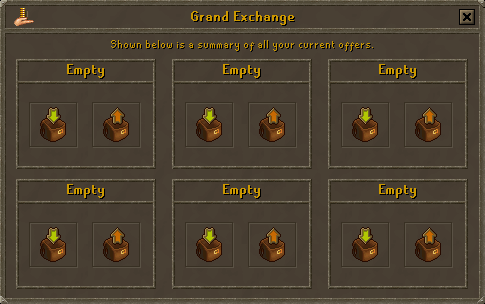 While the Grand Exchange made trading far more convenient than it had been before, some of its effects would be more controversial if they came to Old School RuneScape. The initial launch of the Grand Exchange was marked by massive fluctuations in item prices as players adjusted to the new levels of supply and demand, and as players dumped the junk from their banks. New strategies evolved for making fast profits from the market, or for making the official guide prices trend upwards or downwards. It was also far more convenient for gold-farming bots to turn their botted items into fast cash.

Now let's look at a simpler option. In Wednesday's newspost, we touched on the idea of letting players send 'Trade' requests by clicking the Trading Post screen.

This would let you open the Trade screens with someone who's in any bank on your world, including the extra areas like west Varrock and Falador Park, so you wouldn't have to meet up in person.

If a full GE doesn't have sufficient support, we'd like to offer this sort of simpler update instead as a compromise.

This change shouldn't take very long to add, so you could even ask for it as an interim update while waiting for a bigger expansion.

Many players have, predictably, asked for trades to complete automatically. This would be pretty close to a Grand Exchange, really, with the main missing feature being the ability to keep your offers listed while you're offline.

We'd need to get some changes made to the game engine for this, since it would cause synchronisation errors if you cancelled your offer by logging out while it was completing automatically. Engine jobs aren't such a problem anymore, now we have Ian in the team as our engine programmer. However, he may have to get the RS3 engine team involved to undertake a job like this, so it would not be such a quick job.

Do remember, the Trading Post currently confirms you've got the item you're offering to sell. It won't be able to do that for Buy offers, so if you vote for us to add Buy offers, you'll likely see more silly offers coming in from trolls and time-wasters.

We could let players search the lists of offers without being in a bank; there's no need to restrict where you can read it. We'd just need you to decide how the screen should be opened. The most convenient solution would be to add a button to the gameframe to open it. However, editing the old school gameframe can be controversial. So you might prefer us to give you an item that opens the screen when you click it. That would, of course, be less convenient.

One of the features we were planning to poll for the Friends panel is a 'Join' option, so you could hop to your friend's world. While we'd still like to poll this for the Friends panel, and maybe the chat-channel panel too, we'd also like to offer it for the Trading Post screen.

This would be a considerably more powerful feature if the Trading Post screen can ever be opened outside banks, as proposed above. If there's enough support for allowing that, we'd make it clear in the poll questions whether or not the Trading Post's quick-hop feature will work anywhere.

If players support the idea of expanding the Trading Post into a Grand Exchange, it will be able to track the prices of the items people sell through it. All GE transactions are items-for-cash, so it's straightforward for the system to see the price of the items.

However, at the moment, the Trading Post allows you to trade for items other than cash, or to bundle multiple types of item into a trade. That means the game can't work out the price of the items in any reliable way. It certainly can't base the info on the offers people post; it won't be able to track whether the seller got the desired price if they sold the item.

If the Trading Post is ever expanded into something that can track prices, with reasonable protection against price manipulation, we will offer to add a price guide at that time. However, this depends on what sort of expansions people support.

While we'll be opening the poll in the New Year to let you vote on how the Trading Post should be expanded, there are a few smaller feedback jobs that we can launch before then.

In particular, we'll expand the area where Trading Post trading is permitted at the Castle Wars bank. Currently it requires both players to be standing directly adjacent to the eastern wall where the bank chest and Trading Post are. That's because the rest of the CW lobby isn't designated as a bank, since players like to light fires in it. We can work around that to allow Trading Post trading without blocking firemaking.

We'll also add an option to the Trading Post's 'sell' menu to let you search for existing offers for items that are in your inventory.

Meanwhile, thanks for your feedback. Hopefully you can guide us towards expanding the Trading Post into what you'd like it to be... though it'd sure be easier if you could all agree amongst yourselves first!