More than a decade has passed since the Varrock Museum set out to explore the curious landmass to the east. Failed voyage after failed voyage has left the crew almost exactly where they started.

Will you help them finally reach Fossil Island?

Curator Haig Halen needs your help to finish the construction of a barge fit to take the Varrock museum crew to an unexplored landmass to the east. There have been many attempts to reach the island, but none were successful.

This quest will have you venturing across Gielinor, aiding the Varrock museum and making the success of the voyage a possibility.

If you successfully help the Curator and his crew, you'll find yourself where no others before you have ventured: Fossil Island. 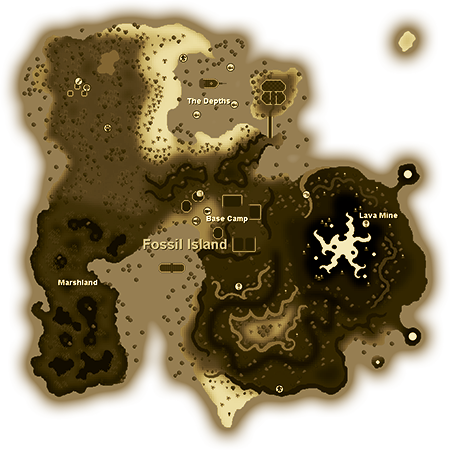 Poll Question
Should Fossil Island and the Bone Voyage quest be added to Old School RuneScape?

As the name suggests, Fossil Island is littered with the remnants of species which once inhabited the island.

Obtaining and collecting these fossils will allow you to barter your way into various parts of the island, and contribute to a new expansion to the Varrock Museum. 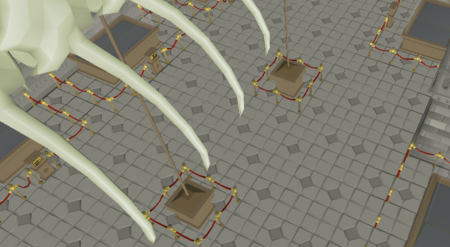 With the discovery of Fossil Island, a paleontology floor has now been added to the Varrock Museum. Your help in collecting and inspecting fossils from the island is needed to fill up this new area.

Many of the fossils you find around Fossil Island will be valuable to the Varrock Museum. As you send them to the museum you will be rewarded with a small amount of experience in Crafting or Construction, depending on the size of the fossil.

The experience rewards for contributing to the Varrock Museum scale based on your Crafting/Construction level and are one-off rewards for each individual fossil. 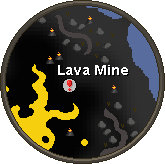 Beneath the surface of Fossil Island's volcano lies a volatile and brutal mine. Engulfed by flowing streams of lava, entering this mine is a true challenge. Maximise the minerals mined by your team and survive to reap the rewards.

The Volcanic Mine is a group skilling activity which focuses on the Mining skill. Much like the Wintertodt, you'll be able to contribute to the success of the team by performing one of several activities:

The primary reward for participating in the Volcanic Mine activity is Mining experience. As an activity which will require a high level of engagement, it will offer experience rates comparable to some of the best existing methods in game.

In addition to experience you will receive small amounts of ores and fossils.

Tick manipulation methods will not be possible within the Volcanic Mine and you will be required to take part in the activity to get rewards. In fact, not paying attention could easily get you killed!

Throughout Fossil Island you will find a number of opportunities to train up and put your skills to work in new and interesting ways. Just a few are detailed below.

In certain areas on Fossil Island the environment is just right to support the growth of Teak and Mahogany trees.

Requiring level 35 and 55 Farming respectively, Teak and Mahogany trees can be grown within three, side-by-side tree patches. Hardwood trees take a lot longer than normal trees to grow, with teak taking an average of 4480 minutes and Mahogany 5120 minutes to grow granting 7290 and 15,720 Farming XP respectively.

Throughout Fossil Island a shy, plant-like animal can be tracked similar to kebbits. If you are able to track this creature down, you can harvest herbs from its back. The trick is in tracking it - this could lead you anywhere on the island so bring a picnic and your patience. Your patience will be well rewarded however with an XP rate of approximately 140k XP/hr at level 85 Hunter scaling to 160k at 95.

The usual Herblore requirements and experience also apply when harvesting herbs with this animal and you will find the herbs you harvest are appropriate for your level.

Poll Question
If Fossil Island is added to Old School, should it include a roaming, plant-like creature which can be tracked and used as a herb patch?

If you're a fan of Hunter, and you really don't like birds, bird house traps are a dream come true. 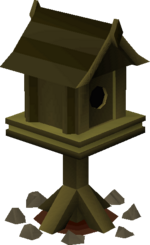 Requiring Crafting and Hunter to create, bird house traps can be placed on Fossil Island to lure in and capture birds. They offer the experience rates superior to any other method between levels 5 and 35 Hunter, alongside some nominal Crafting experience.

A single bird takes, on average, 5 minutes to capture. The different tiers of birdhouse have different capacities, allowing for longer periods of time between checking your traps.

Each tier of birdhouse provides a flat amount of XP for each full birdhouse.

There will be 10 spots in which birdhouses can be placed. This means it will be possible to have 10 birdhouses built simultaneously.

Unlike bird snares, birdhouses are single use.

Once you've placed your bird house trap, you'll need to fill it with some seeds in order to lure the birds in.

After you've placed the seeds as bait, you can wander away and let your bird house trap passively capture birds. To claim your experience, head back to the bird house trap and check it.

Poll Question
If Fossil Island is added to Old School, should it be possible to place Bird House Traps on the island?

The volcanic ash found on Fossil Island offers excellent properties for use in Farming, and can be mixed with Harralander in order to create a Compost Potion. This requires level 21 Herblore.

Compost Potions convert standard compost into supercompost, but they are only currently available as a reward upon completion of Garden of Tranquility and as a reward from Nightmare Zone.

Poll Question
If Fossil Island is added to Old School, should it be possible to create Compost Potions by mixing Harralander with Volcanic Ash found on the island?

Poll Question
If Fossil Island is added to Old School, should Volcanic Ash found on the island be usable on supercompost, or compost bins holding supercompost, to upgrade it to ultracompost?

Although many of the creatures which once inhabited Fossil Island have long since died out, Wyverns have thrived in caverns found throughout the varied terrain. 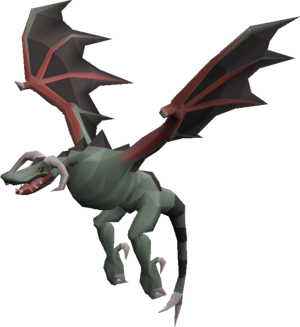 Poll Question
If Fossil Island is added to Old School, should it include a variety of Normal and Ancient Wyverns? These Wyverns would require level 66/82 Slayer to kill. They would only be assigned to players who have completed the Bone Voyage quest.
Ancient Wyvern Drops

The Ancient Wyverns found on Fossil Island offer a number of unique drops not found elsewhere in Gielinor.

One of the new, unique drops from the Wyverns (both normal and ancient) found on Fossil Island is Granite Boots. They require level 50 Defence and Strength to equip, offering strength bonus and defensive stats superior to Rune Boots. 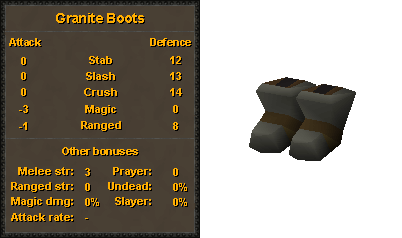 If Ancient Wyverns are added as a part of Fossil Island, should they drop Granite Boots?
The stats and appearence of Granite Boots can be seen in the attached image. Attached Image

Requiring level 50 Attack and Strength to equip, the Granite Longsword would sit as the best slash weapon for players with level 50 to 60 attack. 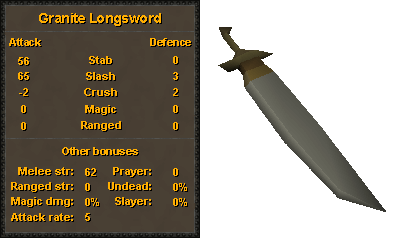 If Ancient Wyverns are added as a part of Fossil Island, should they drop Granite Longswords?
The requirements, stats and appearence of Granite Longsword can be seen in the attached image. Attached Image

The Ancient Wyvern Shield is a strong, defensive and offensive shield for Magic. It provides defensive stats similar to those of a charged Dragonfire Shield. It requires level 75 Defence and level 70 Magic to equip. It renders the wielder immune to Wyvern freezing attacks and has limited protection from dragon fire. 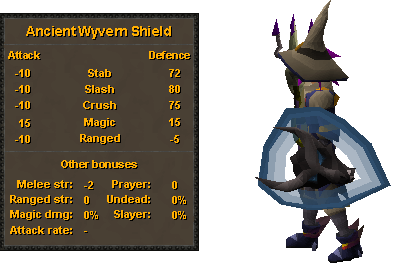 Again, much like the Dragonfire Shield, the Ancient Wyvern Shield starts with no stats. It must be charged by using fossils on the shield.

When activated, the shield lets out a Wyvern-like attack and its stats are lowered accordingly. This attack has a chance of freezing the target.

Exploring this new-found island doesn't stop at the shoreline - there is much to be explored under the surface of the surrounding waters. Take a dive and see what the under water areas beneath Fossil Island have to offer. 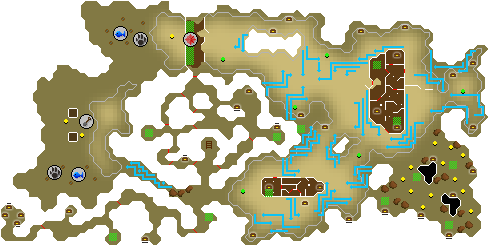 The Agility you'll encounter underneath the waters of Fossil Island is unlike the Agility courses found around the rest of the world.

Rather than being on a set course, you can go wherever you want. You'll get experience in the skill as you go about your business underwater, using the various shortcuts that are available.

Thieving goes hand-in-hand with Agility whilst underwater. Rather than repeatedly thieving from the same NPC or stall as you might above the surface, you'll be swimming around and looting treasure chests as quickly as possible whilst trying to hold your breath.

You'll need to avoid, or utilise, the currents found all over. Getting caught up in a current will push you away, or towards, where you'd like to be. The currents will also cause treasure chests and giant clams to appear in all kinds of places - so you'll have to be on the ball to keep track.

The experience rate provided by underwater Thieving is not comparable to the existing top methods. It will serve as an engaging, fun alternative which allows you to train both Thieving and Agility simultaneously.

The sea floor surrounding the island is perfectly suited for the farming of seaweed. Requiring level 23 Farming, giant seaweed can be grown underwater. 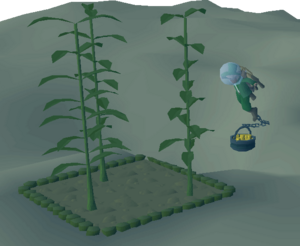 Giant Seaweed provides two soda ash when burnt and are compatible with the superglass make spell.

There are a couple of different ways to fish in the underwater area: using drift nets or chasing down your prey.

Drift nets can be set up and left alone to catch passing fish. As you might expect, catching fish in this fashion provides you with both Hunter and Fishing experience.

Chasing your prey using a harpoon or a trident requires you keep up and kill your prey on the move. Your Agility will come in handy when chasing down prey, as you'll be required to maneuver quickly. Shortcuts will certainly come in handy.

The experience rates achievable with underwater fishing are not comparable to the top existing methods, being approximately 50k XP/hr in Hunter and Fishing at level 60. However, they will offer you a chance to train another skill alongside Fishing: Hunter or Agility.

As always, we're very interested to hear what you have to say about this blog. If you have feedback, be sure to let us know!