Fossil Island has existed as an idea in the heads of designers since 2005, as a concept in the game since 2007, and was unveiled and polled back in April. With its release nearing, it's time to divulge more details about the mysterious isle. In the first of two blogs we explore the underwater areas beneath Fossil Island, and we take a brief look at the Mushroom Forest and the skilling methods which can be found on offer inside it. The primary developer on this project, Mod Maz, will answer your questions, and we'll also be sharing concept art of varying stages of completion. 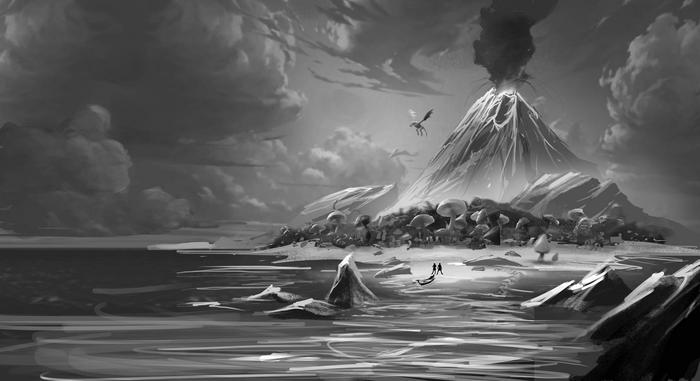 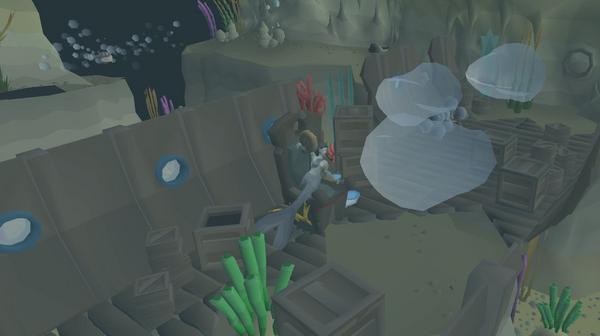 In this section of the blog we'll offer a detailed breakdown of the unique mechanics found underwater, and we'll take a closer look at the skilling activities found in the depths.

The fishbowl helmet can be worn in the area immediate to the initial diving site, so you don't need to be concerned about your air supply. However, the majority of the underwater area is the domain of the mermaids. You'll find that one mermaid in particular has a reason for disliking fishbowls.

In order to access this area you will have to abandon your fishbowl helmet and manage your oxygen carefully by utilising the environment.

Restoring your oxygen levels can be done via a number of methods. Large bubbles will appear in certain areas underwater, moving your character to within these bubbles will restore your oxygen. Air can be harvested from growing weeds (akin to taking water from cacti). Many puffer fish can be found underwater, these can be caught and squeezed to take air from them and then release them. There are some areas which are above water, if you're able to find these you can restore your oxygen.

Fully running out of your oxygen (the bar reaching 0%) will result in your character being asphyxiated and returned to the surface of the island above the underwater area.

Underwater fishing
The underwater fishing activity requires at least 47 Fishing and 44 Hunter to begin, and will reward xp in both skills. Drift nets are tradeable and can be crafted by using jute on a loom at level 26 Crafting. These drift nets can then be strung up underwater to catch fish over time. The nets will break upon harvesting your catch.

Left alone the drift nets will passively catch fish at a slow rate, or you can actively pursue fish with a trident to drive them into the nets. Pursuing the fish will ensure that the rate of reward and xp is higher. The type of fish harvested and the xp gained will scale according to your current base level.

The amount of xp granted from this activity is by no means comparable to the highest xp rates found elsewhere. The xp is approximately 40% of the xp you'd ordinarily get through other methods, but gives it in both hunter and fishing at the same time. 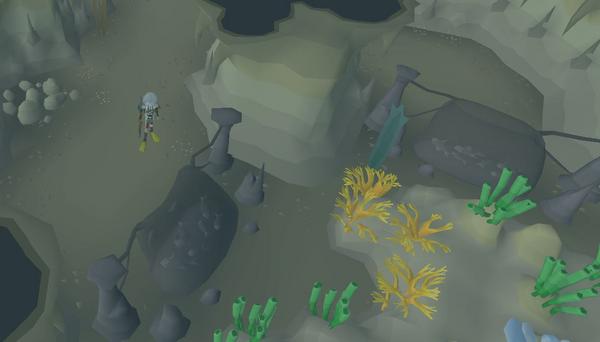 Underwater agility and thieving
The entirety of the underwater area is essentially an agility course unlike those you've experienced before. In essence it's free-form agility, comprised of obstacles to navigate, and chests and clams to loot.

Failing certain obstacles can result in the loss of oxygen, and navigating around the underwater area isn't as simple as it may seem due to the presence of underwater currents.

Looting from large clams and treasure chests will yield mermaids tears. These can be traded with the fishbowl-hating mermaid for fossils, seaweed seeds, and the trident. 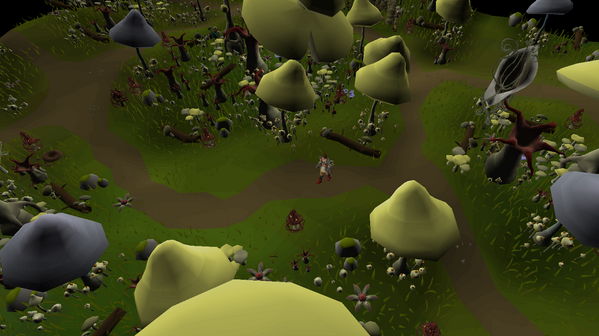 One of the most striking environments found on Fossil Island is the Mushroom Forest. The surrealness of the forest is on a grand scale, and is among the most unique places in all of Gielinor. With this in mind it's best for you to explore its rich narrative.

Prayer training
Within the Mushroom Forest is a pool full of fungal life. Adding pyrophosphate and calcite (both of which are found around the island) will fuel a chemical process which will recalcify fossils into enriched bones which can be used to grant prayer xp. The fossils which are used are non-tradeable, as are the resultant bones you receive. Mod Maz also answers a question regarding this activity in the next section of the blog. The image immediately below this one shows the pool and the activity interface.

Bird house traps
Bird house traps can be constructed to lure in and capture birds. They have already been covered in great detail, and all of the information you need can be found in April's dev blog. 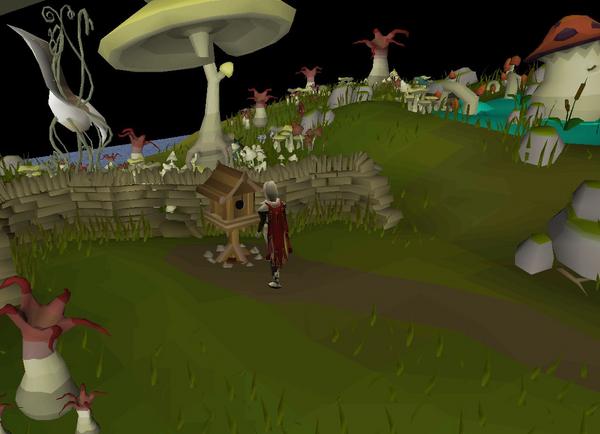 Tracking and herblore
The tracking activity on Fossil Island has already been covered in in April's dev blog. In this blog we're able to offer a preview of how the activity will appear, complete with temporary placeholder graphics! How about those bright pink paw prints? 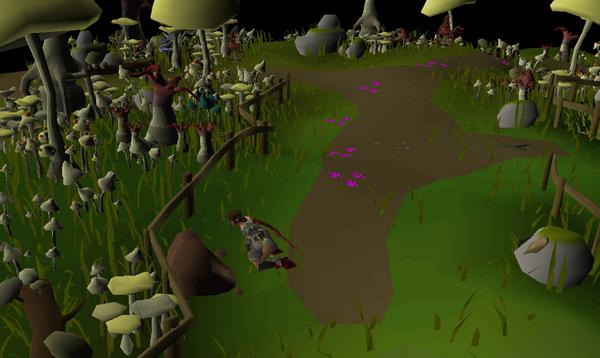 Was the underwater area present when Fossil Island was first envisioned?
Absolutely. Mod Mark and I wanted to try to fit in a little bit of most environments into Fossil Island, featuring volcanos, swamps and under the water.

What difficulties did you face in developing the mechanics found underwater?
Previous underwater content was tightly restricted to just a few quests and a very small environment with just one or two things to do. To facilitate the ability to interact with many different items underwater, I had to hook into fundamental game systems such as those used when you wear/drop and pick up items. This was quite challenging to do without interfering with the rest of the game as a whole.

What rewards are offered by the mermaids?
Mermaids are fickle creatures, often over emotional or just plain strange, so they have decided to offer their own take on a trident – not for combat, but specifically made for underwater fishing. This is in addition to the fossils that they have found under the water and seaweed seeds.

Does the seaweed farming work in the same way as all other farming? i.e. you need to rake the patch, use compost, plant seed.
Apart from being underwater, yes! Fertilise your patch, plant your seed and go do some drift net fishing or agility whilst it grows, then you can harvest some giant seaweed. You can even use a very soggy leprechaun to store your tools.

How long does seaweed take to grow, and is the patch unlocked once you can access the underwater area, or is it an additional unlock?
The seaweed patch is only locked behind your ability to get under the water. It’s quite close to the entry point too. It'll take between 20-30 minutes to grow.

What can be fished underwater via the two different methods (hunter & passive)?
Fish and fossils! The only real difference between these two methods are the time and effort you want to put into it. Set your nets and go do something else and you’ll very slowly gain fish over time, sacrificing the hunter XP as you aren’t actively hunting the fish. Or if you want to fish quicker, get your trident out and go scare some fish into your nets. This will earn you hunter and fishing XP, as well as allowing you to harvest your fish with the occasional fossil dredged up too.

Once the displays are completed, what use is there for fossils?
This was one of my primary concerns when designing the island. I did not want it to be a one-shot piece of content that you never go back to so there are several uses for them. The ancient mycelium pool used by the original inhabitants of this island seem to have the ability to restore fossils into bone, but not any normal bone. In addition to this, the Ancient Wyvern Shield uses them for charges. There is also a planned future repeatable use for them in the museum, but that will come in a subsequent release.

How does the prayer activity work?
So it appears that the mycelium pool can convert fossils into enriched bones via a chemical process. This uses pyrophosphate and calcite, both gained from several places around the island. Whilst the reaction is happening in the pool you must keep your fossils below the liquid level, as they tend to float. If you don’t do this, you will lose some fossils to the chemical reaction. Once done, you can rinse them off and use them to get prayer XP at another location on the island.

Is there anything else you’d like to tell the players about Fossil Island?
Two things! There is a lot of lore behind fossil island, but for the most part it is optional, so those of you that are lore hounds will hopefully be fulfilled as well as those of you are there for the activities. The other is that there is SO much more I want to add to the island over the coming years. The players contributed so many good ideas that we had to cherry pick just a few for development, but we feel that others deserve a place there too. This will be an ongoing TAPP project for me for a long time to come, so expect more activities!

Below are some of the designs used for the Varrock Museum displays. Click to see the large images. 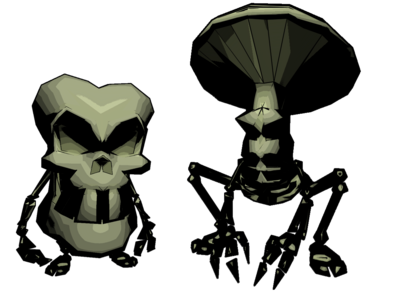 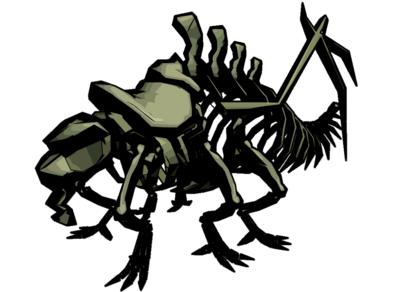 Click to see a larger preview of the lava mining activity