The Fishing and Mining Guilds might be getting a bit bigger - here is a look at what will be on offer on the poll going live later this week!

Edit (15/06): The 2 Runite Golems in the Mining Guild Members' Area have been replaced by a single Runite Rock. The dwarven prospectors in the Mining Guild were mistaken, they hadn't stumbled upon Quartz after all, what they encountered was actually Amethyst! The Fisherman on the new Fishing Guild platform is feeling far more generous: the GP per hour earned via fishing minnows has been increased to roughly 400k at 82 Fishing, and 650k at 99 Fishing. The XP rates for fishing minnows have increased to roughly 40,000 XP per hour at 82 Fishing, and 50,000 XP per hour at 99 Fishing.

The Mining Guild has long been neglected in favour of other non-traditional mining methods. We'd like to show the guild some love in the form of an expansion, as well as introduce new mining equipment, and a whole new mineral to mine.

Improvements to the existing guild

At present the guild contains just 37 Coal and 5 Mithril. Currently it's better to mine outside of the guild in the Dwarven Mine. We'd like to remedy this by adding 2 Adamantite and 4 Iron rocks. This would allow the guild to compete with other free-to-play mining areas.

In addition to the new rocks we would like to add two new shops: one for ores and one for pickaxes. The ore shop would have no stock by default.

We'd like to add a new members-only area to the guild. The new area would contain a bank with a deposit box and a poll booth. The new additions in this area are as follows:

All rocks in the guild have a halved respawn timer when compared to the same rocks found elsewhere in the game.

As well as this, when inside the new guild area you will receive an invisible passive +7 boost to your Mining level. This will improve your chances at mining ores, but will not allow you to access rocks which require a higher level than you have. This boost stacks with other boosts to your Mining level. The new area of the guild contains a new mineral for you to mine, Amethyst. Amethyst requires 92 Mining, and the Amethyst crystals obtained through mining here can be used to create all new Arrows, Bolts, and Javelins. 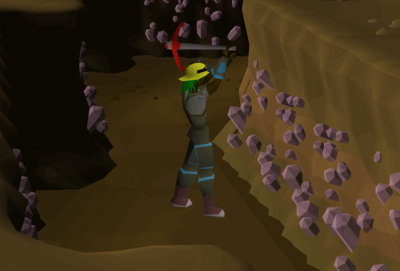 Amethyst crystals take a long time to mine and will offer only a moderate amount of experience when compared to the best mining methods available.

Level 83 Crafting would be required in order to craft Amethyst Bolt Tips. Each piece of Amethyst can be chiseled into 15 Bolt Tips, awarding 60 XP in Crafting.

These can then be added to Broad Bolts by players with level 76 Fletching, awarding 10.6 XP per bolt. You must have unlocked the ability to fletch broad bolts in order to create Amethyst Broad Bolts.

Amethyst Broad Bolts will be usable with Runite crossbows and above, providing you meet the requirement of level 65 Slayer. These bolts offer a ranged strength bonus of +115, equivalent to Runite bolts.

Players with level 85 Crafting will be able to chisel Amethyst into 15 Arrowtips, awarding 60 XP in the skill. These can then be fletched into Amethyst Arrows, awarding 13.5 XP per arrow.

These arrows provide a ranged strength bonus of +55, and are usable with Magic bows and above.

Level 87 Crafting is required to chisel Amethyst into Javelin Heads. Each piece of Amethyst can be chiseled into 5 Javelin Heads, awarding 60 XP.

Mining any rock within the new area of the guild will offer a chance of obtaining some Unidentified Minerals alongside the usual ores obtained. This minerals can be traded for Mining Gloves. There are two variants of these gloves: standard, and superior.

Question: Should we expand the number of rocks found within the F2P area of the Mining Guild? This would include adding 2 adamantite ores and 4 iron rocks, as well as an ore shop and pickaxe shop. The ore shop would have no stock by default.

Question: Should we add an extended, members-only area to the Mining Guild? This new area would include 8 iron rocks, 20 coal rocks, 10 mithril rocks, 8 adamantite rocks, 2 runite rocks, and a bank.

Question: If the members-only area is added, should the rocks within this area respawn twice as fast as rocks elsewhere in Old School?

Question: If the members-only area is added, should a passive +7 Mining boost be given to any player within this area?

Question: If the extended Mining Guild area is added, should mining gloves, as described in the recent developer blog, be available as a reward? [Image]

Question: Should we add Amethyst as a new material within the Mining Guild? It will require 92 Mining and can be used to fletch new Arrows, Bolts, and Javelins. [Image]

We'd like to offer a new fishing method within the Fishing Guild, exclusively available to those who are willing to put in a bit of extra leg work.

A fisherman, found on a newly constructed platform within the guild, is having a bit of trouble. He wants minnows to use as bait, but they're a bit too agile for him to catch.

He has, however, managed to net in the minnows into a couple of small areas beneath the platform. If you have what it takes to catch minnows, you can trade them to him in exchange for sharks! 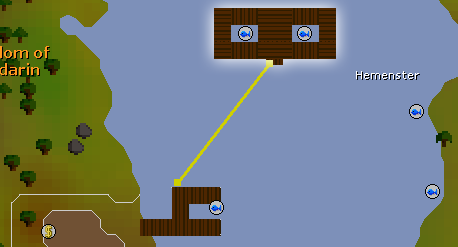 Minnow fishing would be possible from a new platform erected in the northern end of the Fishing Guild. Accessing this platform and catching minnows would have the following requirements:

The rapidly changing locations of fishing spots, and occasional appearance of flying fish who have a bad habit of stealing your minnows, would make fishing on this platform more click intensive than most other methods.

With such hefty requirements, and a need for constant attention, fishing minnows would be suitably rewarding:

Question: Should minnow fishing be added as an expansion to the Fishing Guild? Minnow fishing is a more click-intensive fishing method, with rapidly moving fishing spots and other distractions. Accessing the minnow fishing platform would require level 82 Fishing, completion of Fishing Contest and a full Angler's Outfit. Minnows can be exchanged for sharks by talking to the Fisherman found on the fishing platform. It would provide an average of 50,000 XP per hour at level 99, as well as an average of 650k GP per hour at level 99.

Question: Should an invisible +7 Fishing boost be applied within the Fishing Guild? This would stack with other stats boosts, such as the Dragon Harpoon.

There are a number of places where a Make-X option is available, but there is no option to Make-All. While this is a small difference, having to select Make-X and enter an arbitrary large number definitely becomes a drag after doing it a few hundred times.

There isn't any particular reason why Make-All is only available in certain places, other than how recently the content was updated prior to August 2007 (the basis on which Old School is built).

We recently saw over 95% approval for Make-All options to accompany existing Make-X options in a recent in-game survey. Unfortunately, we were a bit too deep into other projects to deliver it at the time.

We're pleased to say that we can now offer this update!

Currently, many of the existing Make-X interfaces use a pre-2006 interface format for which our developer tools no longer work. Editing them would first require them all to be recreated in a newer format, just to add the extra right-click option to them individually. Doing this would slow down the project considerably, for no real benefit.

As such, in order for this change to be possible, we will need to change most of these existing Make-X interfaces to be uniform in appearance.

These changes to interfaces will be minimal, but some changes will need to take place.

These updated interfaces would offer Make-All as an additional option on the right-click minimenu from which you currently select Make-X.

Question: Should a Make-All option be offered alongside every Make-X option in Old School?

While we have to change Make-X interfaces to be uniform, it is a good opportunity for us to offer a rework of these interfaces to make them a bit more user-friendly.

On top of offering Make-X to be accompanied by Make-All, we'll also be offering an improved interface for these options. 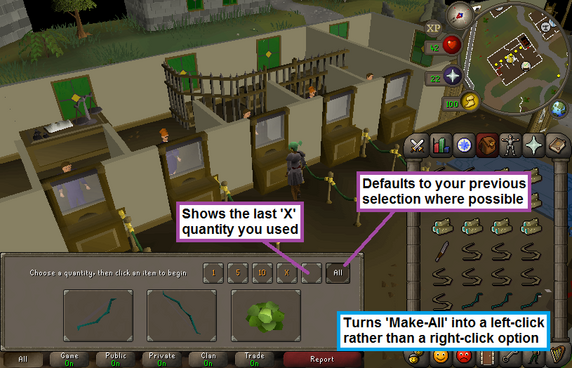 The menu shown above is a mockup of what the improved Make-X menu would look like. It is not indicative of the final appearance of the interface, but is representative of the functionality of Make-All. We can make the interface beige to fit the Old School theme.

For example, if you have 'All' selected, clicking one of the large buttons below will perform the action until all of your supplies have been used.

The option you have selected from the top right of the menu would be remembered, so you would not have to select the number of items you'd like to create every time you go to perform an action.

The blank button in the top right will display your previously selected quantity after you use Make-X.

If you only have enough supplies to make 1 of something, and there aren't multiple choices for what can be created from your supplies, this interface will not appear and the action will be performed immediately.

While this is quite a change to the existing menu, it is one which has a very minor impact on gameplay. It only saves you one click, much like the recent addition of shift-click drop.

You may also notice the change in colour on the background of the interface. This is due to the colour of the buttons not really looking so great on the familiar, beige background.

Question: If Make-All is added to Old School, should the Make-X interfaces in the chatbox area be upgraded as described in the blog so that Make-All can be a left-click option rather than always being right-click? [Image]

The Magic Void Knight set is not particularly useful. The additional Magic accuracy it offers simply is not enough to make it worth using over any other available gear - not even the likes of Mystic Robes.

In this week's poll we will be offering a buff to the bonus this set offers, giving it meaningful place as a Magic set.

Currently, the Magic Void Knight set provides a bonus of 30% Magic accuracy. We'd like to increase this to 45% Magic accuracy, as well as offering a 2.5% Magic damage increase for the elite set.

Question: Should the Magic accuracy boost provided by the standard and elite Magic Void Knight set be increased from 30% to 45%?

There are a lot of different teleport scrolls. They're handy, but they aren't always worth all that bank space.

We'd like to offer a solution to this problem: the master scroll book.

The master scroll book would be a rare reward from all tiers of clue scroll. It would be tradeable when empty, but untradeable when scrolls are stored in it.

Question: Should the master scroll book, an item which can be used to store clue scroll teleport scrolls, be added as a rare reward from all tiers of clue scroll? This item will be tradeable when no teleport scrolls are contained within it.

Players have long requested the ability to be able to break their vials automatically after consuming potions.

We'd like to offer players a toggleable option to auto-smash potion vials. This option will be available from the Barbarian Guard found at the Barbarian Outpost and accessible only after completing the Alfred Grimhand Bar Crawl.

Question: Should players have the option to toggle the ability to automatically smash vials after consuming the potion?