Previously referred to as Battle Royale, Last Man Standing is an all-out player-vs-player minigame where the last person alive wins.

Click here to give the developer blog a read and be sure to let us know what you think!

25 players go in, one winner comes out.

Last Man Standing, otherwise known as Battle Royale, is a true test of your skill and resourcefulness. Those who prove themselves are greatly rewarded, and those who do not go home empty handed.

We will be polling Last Man Standing in the near future, be sure to give this blog a read and send your feedback our way.

The concept of Last Man Standing is a simple one: 25 players are placed on an island with maxed stats and no gear at all. From there, they must search the island for gear and supplies, kill anyone who stands in their way and be the last man standing.

As time passes, fog engulfs the island. Throughout the game the size of the playable map slowly gets smaller and smaller until the remaining space is just a few squares. There is no escaping the other people you are trapped on the island with. It is kill or be killed.

Games of Last Man Standing will be roughly 20 - 25 minutes in length, but can vary depending how quickly or slowly players die. The fog will cut the playable map to a very small area by the 20 minute mark, so the games shouldn't ever last much longer than that.

When searching the map for loot you will be able to get your hands on equipment for all combat styles, spanning from mid-level to high-level gear. We want to create variety in Last Man Standing - ensuring that all combat styles are catered to is key in achieving this.

Last Man Standing will include one map. This may expand in the future, but for the initial release we would like to make sure the map we have is balanced correctly, well thought out and provides an enjoyable experience for those taking part.

Here is our concept so far: 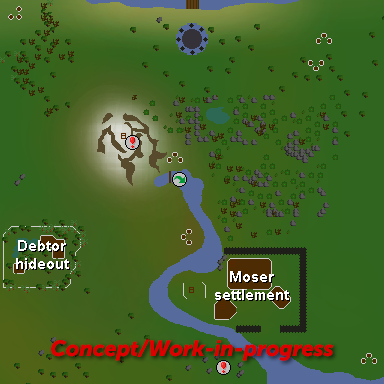 We've designed this map with a focus on giving you choices to make. Each different location will offer different advantages and disadvantages. You'll have to take many things into account:

When playing on the map shown above you will have to constantly be on your toes, thinking about your next move and how to stay one step ahead of your competitors. There will be ways for you to skillfully gain an advantage, as well as ways for you to make mistakes and fall behind.

The concept is still unfinished and we will be expanding on it much further before the release of Last Man Standing.

There will be two different versions of Last Man Standing:

The 100k entry fee in the competitive mode ensures that participants will keep their eyes on the prize and allows us to provide a real incentive for them to win the game.

Last Man Standing will be solo only. We will look into expanding this to include a team version of the minigame in the future if it is something the community is interested in.

On top of being a great way to prove your skill to your friends, having a high LMS rating will make you eligible for participation in future Last Man Standing tournaments.

Inflation isn't a worry as those coins come straight from the pocket of the players you just defeated. In fact, Last Man Standing will act as a gold sink, removing a sizable chunk of gold from Old School for every game that is played.

In addition to this, the players who come in 3rd, 4th and 5th place will receive a ticket allowing them free entry into another game of Last Man Standing.

By playing Last Man Standing you will be able to unlock a cosmetic cape which changes appearance to reflect your LMS rating. This will act as a way for you to show off your Last Man Standing skill when out and about in Gielinor.

In addition to this, you will be able to unlock cosmetic upgrades within the minigame by playing. These unlocks won't impact on gameplay in any way, but they will allow you to intimidate your opponents by letting them know just how experienced you are. All of the cosmetics found within the minigame will use existing in-game graphics, such as trimmed armour from treasure trails, rather than any new designs.