We've just put up a revised version of our summer slayer expansion developer blog. As always, we are looking for as much feedback as we can get so be sure to head over to the blog and let us know what you think!

Boss slayer has been a very highly requested update to slayer and is the first feature on offer. 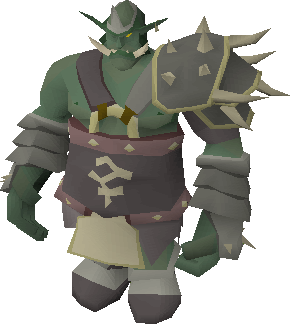 We would like to offer it as an unlockable task costing 200 slayer points. Once unlocked, you can be assigned any of the monsters on the boss log, with the exception of the corporeal beast, as a slayer task.

Note: Unlike the previously proposed version of boss slayer, you will be assigned a specific boss to kill. You will not be able to pick and choose which boss you kill when on an assignment.

These tasks will be available from Nieve and Duradel and, as the experience rates at bosses will not be particularly great, upon completing a boss task you will be rewarded with an additional 5,000 slayer experience. 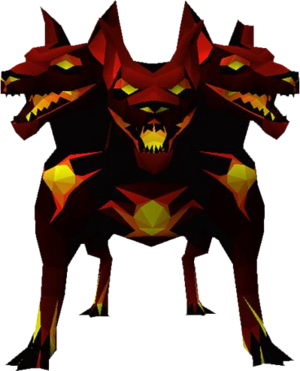 Last year saw the release of the first Slayer bosses, Thermy & Kraken, and since then we've had no end of requests for more. Cerberus, the hellhound boss, is the first new boss we'd like to offer you.

Located in a new cavern, accessed from Taverley dungeon, Cerberus is thought to guard an ancient gate leading to another plane and with three heads is certainly no pushover.

You'll need 91 Slayer and either a hellhound or Cerberus slayer assignment to take on the demonic canine but those strong enough to slay the beast may find themselves one of the new rewards! 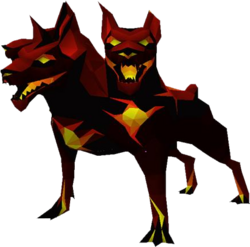 The signature drop we're offering is new best-in-slot boots for all 3 combat classes. However, rather than just dropping the boots Cerberus will have a chance to drop one of the collars worn around its three heads. Embedded within each collar is a powerful crystal from which Cerberus draws its power. If you're lucky enough to find one of these crystals you'll be able to use your magic and crafting skills to create three new boots.

Each of the crystals and new pairs of boots are tradeable and do not degrade at all but once created, can not be reverted or broken down in to the original components.

Created by infusing infinity boots with one of the as yet unnamed crystals, Eternal boots provide a +8 magic attack as well as +5 stab, slash, crush and range defence and +8 magic defence.

Created by infusing ranger boots with one of the as yet unnamed crystals, Pegasian boots provide a +12 range attack, -12 magic attack and +5 stab, slash, crush & magic defence.

Requiring 61 woodcutting and 85 firemaking to create, the Infernal axe has a 1 in 3 chance to incinerate logs when chopping trees, providing firemaking experience equal to 50% of burning the logs with a tinderbox. Over time however, the stone will lose power and the axe must be recharged with either another smouldering stone or dragon axe after burning 5,000 logs.

Both infernal tools are untradeable and once created can't be dismantled.

As with all other bosses, Cerberus will also have a very small chance of dropping a boss pet, a hellhound pup.

The next slayer boss on offer is the Abyssal Sire, a higher order of Abyssal demon that possesses the power to manipulate tissue of both the living and dead to its will. Using this ability the Abyssal Sire creates a bio-nexus from the remains of adventurers, rearranging their flesh into a living, subservient environment from which it feeds and flourishes. Once a nexus is established, a Sire will often become bloated from its endless greed as it feeds continuously but this does not mean that it becomes any less lethal. When disturbed, a sire will become enraged that another dare to encroach upon its territory and unleashes the full fury of the Abyss upon its latest victim before, they too, join its Nexus for eternity. 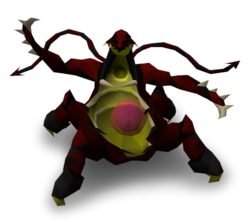 Requiring 85 slayer and either an abyssal demon or boss slayer assignment to fight, an Abyssal Sire will prove a challenge for even the most experienced slayers. Those fortunate enough to survive the fight may find themselves a new abyssal dagger!

These stats leave the abyssal dagger slightly weaker than a Zamorak hasta but with attack styles to train Attack, Strength or Defence.

This special attack offers potential for more big combos while having a max hit lower than several other existing weapons.

The abyssal bludgeon is a two-handed weapon that requires 70 attack and strength to equip. It has the following stats:

The abyssal bludgeon will have only one attack style that uses crush and trains strength (and hitpoints). 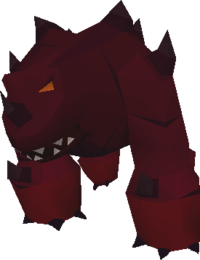 We would like to offer a TzHaar task that can be unlocked for a cost of 100 slayer points. Upon receiving this task from a slayer master, you will be given the choice of either killing the given number of TzHaar monsters or taking on the challenge of completing the fight cave.

To tie in with the TzHaar task, we will be offering to introduce the TzTok-Jad pet.

Players completing the fight cave would have a slim chance of getting a Jad pet upon defeating TzTok-Jad himself. Your chance of receiving the pet when on task is double that of a player completing the cave normally.

We would also like to include an additional option to get yourself a Jad pet. If you aren't lucky enough to get a Jad pet after getting yourself a fire cape, you would then be able to sacrifice your fire cape for another shot at the pet on the spot. The chances of getting a pet by sacrificing your fire cape would, again, be slim.

Along with this slayer update we would like to give a few more uses for slayer points.

We would like to add to the list of monsters that you can purchase extended tasks for. Here is a list of those we had in mind.

These task extensions can be purchased individually or as part of a new mega-pack that unlocks all extensions for a small discount.

The herb sack would be an untradeable item purchased for 750 slayer points. It would require 58 herblore to use and would have the very useful ability to store up to 30 of each major grimy herb (which includes the main 14 types of herb from guam to torstol).

It would have a left-click 'Fill' option and an 'Empty' option with the bank open.

We've had a number of requests regarding several different monsters that are assigned as slayer tasks to offer more spawns to help prevent spots filling up on every world. We've also had many requests to add some new monsters to the stronghold slayer cave.

Additions to the slayer cave

We would like to extend the stronghold slayer cave west beyond the iron and steel dragons to include a few new monsters in the cave. The monsters that would be introduced are:

You will not be able to use a cannon in the extended area, this is to prevent the Stronghold Slayer cave becoming the one stop location for every assignment.

Additional monster spawns around the map

We would also like to increase the amount of monster spawns for the following monsters in the listed locations:

We've had some requests to make improvements to existing slayer monster drop tables in order to keep them rewarding so we'd like to offer some minor changes to Dark beasts and spiritual mages.

Dark beasts will be slightly buffed with some of the less useful items on the drop table being replaced with some more valuable items commonly found on generic monster drop tables.

Spiritual mages will have a slight increase in the amount of runes and essence they drop, the contents of the drop table itself won't change.

Lastly, we'd like to rework the current assignment list that slayer masters use to select tasks. As it stands, the chance of receiving each monster as an assignment differs from monster to monster and some of the requirements on receiving certain tasks, such as 110 combat to be assigned dark beasts, have been requested to be removed. So we're offering to completely re-write the task selection system for each slayer master with more sensible requirements and an equal chance of selecting each available task. It isn't possible to be very specific with this rework at this this stage but should it pass, will be done in a such way that has as minimal an impact on overall Slayer experience per hour as possible.

So there you have it! As always your feedback is critical so before selecting how best to break up the questions for polling we'll review all of your feedback early next week.