We have just put up a developer blog for the Grand Exchange in Old School. We want to know, once and for all, how the community feel. Make sure to read the developer blog and to let us know what you think.

The Grand Exchange, as well as all of the other content talked about in the developer blog, will be poll next week.

Head over to our forums to read the Grand Exchange developer blog.

In the poll planned for next week we are going to be offering the full Grand Exchange along with some additional quality of life questions. In this developer blog we will be going over the Grand Exchange system and clarifying exactly what would be implemented into Old School.

The Grand Exchange is a system that aids players in buying and selling items. If it were released the trading post would be removed. It would not replace the original, manual trade system, it would exist alongside it. The sale of items through the Grand Exchange determines the market value of the items sold. The market value represents the average value of the item based on recent trades and is updated every 6 hours.

While RS3's Grand Exchange has website features to track the price history of all the items, it may not be possible for us to get all those features added to the Old School website alongside our launch of a Grand Exchange. Nevertheless, we would aim to have them added as soon as possible.

Trading through the Grand Exchange 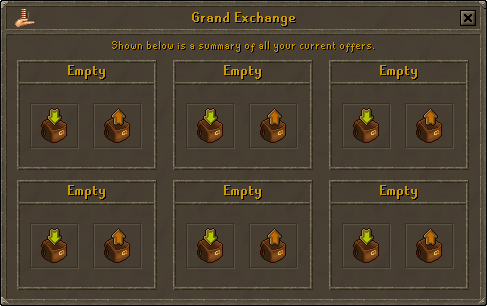 If you choose to sell an item you will then be prompted to select the item from your inventory and then set a price. The price of the item when you initially select it will be the market value and you are free to increase or decrease your asking price. 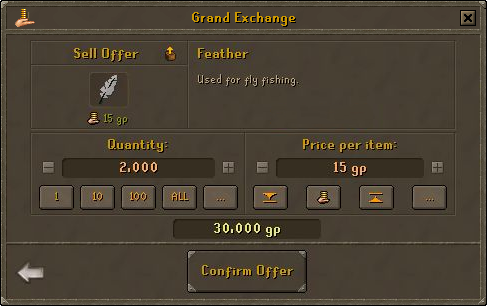 After you confirm your offer the items you are selling will be stored in the Grand Exchange.

It is then down to your fellow players to put in an appropriate buy offer in order for your item to sell. Your trade will complete once a buy offer has been found to match your sell offer and you will be able to collect the coins from either the Grand Exchange clerk or any bank around the game.

If you wish to buy items through the Grand Exchange you will need to return to the offer screen and select the 'Buy' option on any open slot. You will then see a screen asking you to search for an item. Here you can look for any tradeable item in the game. 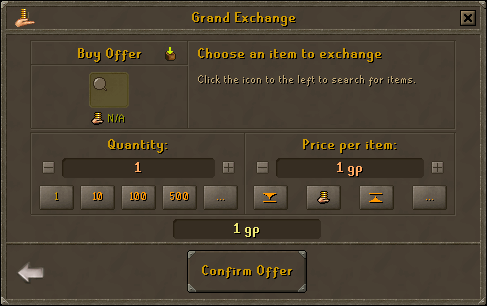 The Grand Exchange will check if there are any matching sell offers available. If a match is found you will receive the item(s) you were purchasing and any remaining coins due to players selling items for a price lower than what you were offering to buy them for. You can then collect your items from the Grand Exchange clerks or through the collect option at any bank in the game.

Just to be clear, if the Grand Exchange is introduced there will be absolutely no price limits.

One issue that the Grand Exchange may bring along with it is the possibility of price manipulation. While a large majority of items will remain unaffected, some items that are traded infrequently may end up with their prices being artificially altered by large groups of players in order to profit.

In order to combat manipulation there will be limits on the rate at which you can buy different types of items. These limits will be generous and will likely not interrupt any day-to-day trading that you are doing but they will go a long way in making sure that items are not bought out in bulk.

There would be no limits on sell offers and these limits will only affect the Grand Exchange. You would still be able to trade through the trade screen as usual if you needed items in bulk.

Note: The images used to illustrate how the Grand Exchange works are of the original Grand Exchange menus from 2007. For Old School RuneScape, we would use similar menu layouts, but the screens and buildings would not be identical.

In the case that the Grand Exchange does not pass we will also be offering a couple of changes to the trading post.

The first is to hide offers from players that do not have their private chat set to 'On'. This would ensure that anyone with a visible offer on the trading post would be able to receive your private messages and would save you the time of adding players that cannot be contacted.

The second would be to add the ability to open the trade interface with players through the trading post. They would have to be on the same world as you, and in a bank area.

Even if the Grand Exchange does not pass, we would be able to offer some form of LootShare system in a future poll if you like..

For some time the question of the dragon defender has been coming up. The Old School community have made it clear that the only place it can come from is the Warriors' guild and so we would like to offer a small expansion to the Warriors' guild.

We would like to add a basement to the guild that can be accessed by showing Kamfreena a rune defender and receiving a key. The basement would contain large cyclops, a slightly more challenging version of the cyclops that has a chance of dropping dragon defenders.

The dragon defender would come with the following stats:

Players that do not have the defence requirement for the dragon defender would still be able to use the existing cyclops to get multiple rune defenders.

We need your feedback

Let us know exactly how you feel about the proposed changes. Your feedback is always vital when it comes to Old School updates so don't hold back.