The Bounty Hunter target system is well into development and will soon be heading into Old School. With this in mind, we feel that in order to do the update justice it is worth looking into making Bounty Hunter rewarding.

From conception, there has been significant interest in considering additional rewards for successfully locating and killing your bounty target. We have some ideas but, as is always the case with Old School, we need to know what you have to say.

Make sure to read through the developer blog to get an idea of how we see rewards working with Bounty Hunter and let us know what you would like to see.

With the Target System taken from the original Bounty Hunter minigame successfully passing the poll, we’ve continued to receive both criticism and feedback about the lack of rewards which neutralises the incentive to use the system.

After days of collaborating ideas from social media, the forums and PvP’ers, we’ve come up with a fresh solution and a fresh new design for PvP.

What did we do before & what we’re going to avoid!

Traditionally, killing an assigned target rewarded you the appropriate drops from your target with the potential for a random statuette based on your time spent in the wilderness against your carried risk. This system, formally known as the EP (Earning potential) system introduced one of the most controversial crazes in PvP history; 76k’ing. To avoid reintroducing a system that has the potential to be farmed and carries the penalty of undermining various aspects of the wider game, we’ve considered alternative rewards that will not unjustly reward those not engaging in serious PvP. 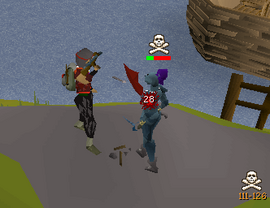 Emblems are small icons that are sometimes dropped by your target when you successfully score a kill. They are tradeable and can be exchanged at a new PvP store for points. They have a set point value and cannot be exchanged anywhere else.

The PvP store is located in Edgeville and will only accept emblems as a currency. The shop should ideally provide handy shortcuts and resources that are applicable only within the realms of the Wilderness and provide benefits centered around the Wilderness Rejuvenation content and wider Wilderness both on the Bounty Hunter and non-Bounty Hunter worlds.

While the content may be centered around the wilderness this does not mean to say that it is only for PKers, items to benefit skillers and PvMers when they take to the wilderness are something we would like to see in the shop.

Kill streaks serve as a means to remain in the Wilderness, scoring kills and being rewarded for your endurance and skill. For players who’ve successfully killed their targets and earned their first emblems, each succeeding target kill will upgrade their emblem into a larger, more valuable emblem. The more targets you kill in succession, the more your emblem will upgrade. Emblems that have been traded between players can be taken back into the Wilderness and upgraded with each successive target kill. Upgraded emblems will be worth more points at the PvP store.

We shall display your ‘Kill Streak’ in a HUD that will record both your current and record streak. Leaving the wilderness will reset your current streak and on return, you shall begin at 0 again.

Dying whilst in possession of an upgraded emblem will reward the successor with your emblem! It’s time to balance ability against greed as any emblems you have in your inventory will always be dropped on death!

Since we understand that claiming dominion over your target and the adjacent PJ’ers is important, as well as collecting meta-game rewards we felt it might be appropriate to introduce an accolade system to inspire you and others to enter and further engage with content present in the Wilderness. Accolades are small meta-awards unlocked as an acknowledgement of achieving a certain task. These can include:

‘Double Kills’ – Killing two players in succession within 10 seconds of each other.

‘Triple Kills’ (and more) - Killing three players in succession within 10 seconds of each other.

And numerous other hidden achievements. These will not be limited to PvP scenarios and will be present in multiple skilling areas of the Wilderness.

One of the most major concerns to note is farming and abusing these mechanics to benefit players who do not wish to take part in the wider PvP content. To combat this, we’re ensuring that:-

You CANNOT be assigned the same target soon after being assigned them.  Emblems obtained through PvP are both dropped and upgraded by killing ONLY your target.  Assigned targets shall be more BALANCED to your risk and combat level.  You can only be assigned a target if you’re risking ABOVE a certain amount.  Killing players who aren’t your target DOES NOT reward you beyond normal PvP conditions.

On top of the above, as the Bounty Hunter feature is only accessible on one world, the condensed number of players taking part and inability to control who you receive as a target will make it fruitless to spend time attempting to farm the system.

In order to fully open up this system to players who aren’t keen to engage in PvP, emblems shall be a rare drop from the three main Wilderness bosses; Callisto, Venenatis and Vet’ion. Any successful target kills whilst in possession of emblems obtained through these bosses will not be upgraded even if traded.