This week sees the release of changes to the Duel Arena, news on the iOS beta and mobile changes.

Back in June we announced content changes we'd be making to the Duel Arena. To tackle odds staking (and consequently Real World Trading) at the Duel Arena, we have made the following changes. Players can no longer stake items; meaning only Coins and Platinum tokens can be used. Each duelists stake must be within 10,000 Coins of each other in value. Winnings (the combined total of both players' stakes) will also be taxed by a percentage depending on the size of the stake. The current stake size limit (a combined total of 2147m gp and 2147m platinum between both players) will remain the same. The same restrictions remain in place as before; F2P players can only stake in Coins, not Platinum, and Ironmen can't stake at all. 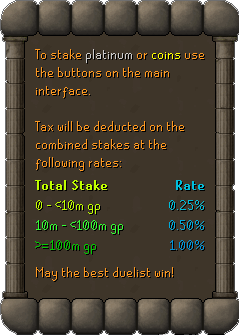 Upon entering a duel, you will be presented with the familiar options screen: 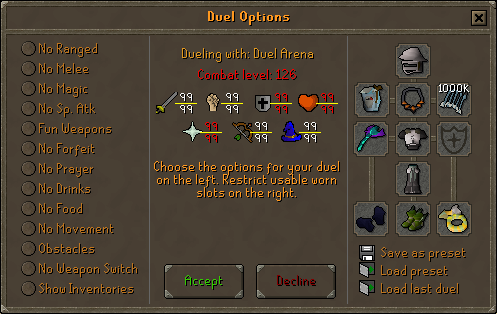 Afterwards, you are taken to the staking screen. Here you can check the staking information as well as your opponent's worn equipment and inventory items (assuming you have the "Show Inventories" option enabled for your duel) by selecting the relevant icons. 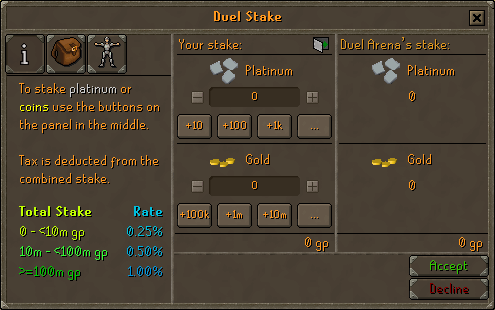 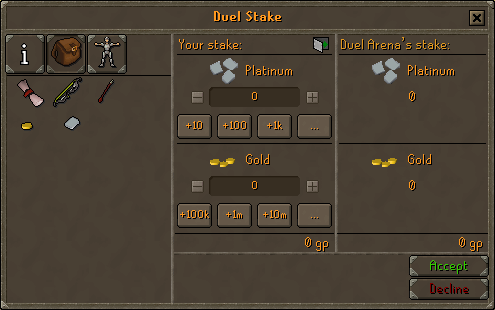 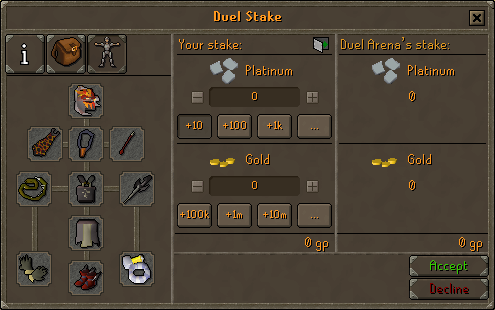 Once agreed and accepted, the confirmation screen shown below will appear for you to check the staked amounts. There will still be a delay before you can confirm the duel and we encourage everyone to check the details of the duel before agreeing to them. 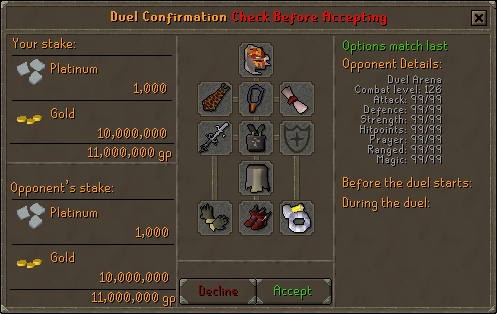 After the duel, the rewards screen will show the amount that was staked by both players, the tax rate and the total winnings. 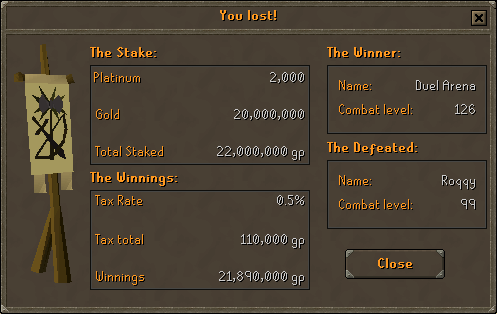 We'd like to thank the iOS players among you for being so patient. It's about to pay off. You've seen the Android Members beta, and the Soft Launch which followed, go from strength to strength, and now we’ve got some very exciting news to share with you. On Thursday 30th August we'll be launching our second, and final, closed iOS beta. For those of you who are unfamiliar with iOS testing, it is conducted via TestFlight which is Apple's platform for managing beta tests. TestFlight has a maximum capacity of 10,000 users, and so that means we’re able to get the iOS beta into the hands of 10,000 players. A closed beta means that it's invite-only. We know that it's been a while since the sign-ups for closed tests were open, and so in the sake of fairness we're going to be opening fresh sign-ups for this upcoming test. The sign-up form will be available between Friday 17th August and Monday 20th August. Make sure you keep an eye on the Old School homepage and our social channels to ensure that you don't miss your chance to register your interest!

Those of you who are invited will be able to play from Thursday 30th August, but you'll be notified of your invitation beforehand. Those of you who aren't invited, do not despair, we've got some scintillating news to share over the coming weeks!

Here's a summary of all of the important stuff:

Below are the most recent changes to mobile: 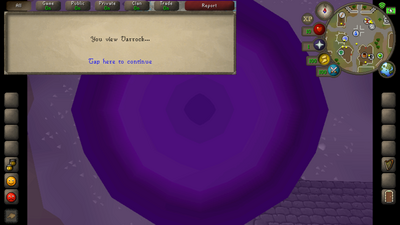 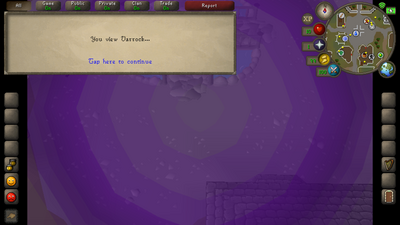 An example of transparent mobile overlays before and after.

The changes to Smite discussed in our PvP Changes and Upcoming Poll Blog have been made. You can now only be Smited in a single tick for an amount up to you current hitpoints. The special attack of the Ancient mace will still be applied in addition to Smite when it is active. 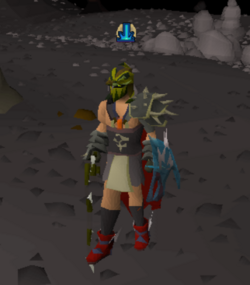