We all have the same aims for Old School, we want a vibrant and active community as well as a stable game to play. We both believe that F2P has a part to play in achieving this which is why we are opening the F2P trial to players who have not had membership for 90 days.

As we mentioned when we first spoke about this in the Bots & F2P dev blog in May, our biggest risk with F2P are players unsubscribing and playing the F2P game. If the revenue generated by Old School starts to suffer because of this there is the possibility of support for it being allocated elsewhere which in turn will mean less updates. This is something that neither you nor we want. A successful game is something that both you and we want. This is why in May we opened F2P on a trial basis for new users.

When we launched the trial we were looking at two things, how will the bots behave and will the new accounts decide to go to F2P and either become members 2 weeks later than they would normally do or not subscribe at all.

When we released the F2P trial we did see a sudden glut of bots join all with the intention of farming yews and selling the proceeds. However, it seems they hadnt read the dev blog properly as we mentioned we would disable yew trees for the trial. We saw a huge amount of accounts with level 40 woodcutting standing around scratching their heads just before we banned them.

The graph below shows the amount of unique bots in Old School. As you can see after an initial peak over the first couple of weeks, the bots in game have remained stable and at a very manageable amount. 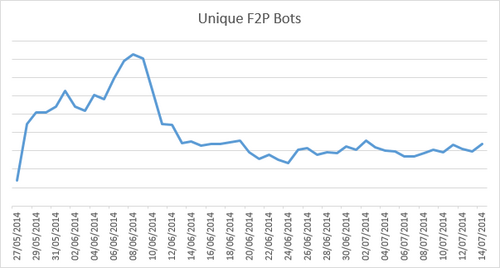 This led us to the conclusion that F2P without the yew trees was not going to increase the bot population. With the added improvements in the bot hunting processes we have, we are seeing that 75% of gold farming accounts are banned within 48 hours of being created so bots are more under control now than ever.

One of the things we wanted to answer with the F2P trial was how the subscribing behaviour would change for new accounts. When the F2P trial launched we immediately saw a reduction of about 30% in new accounts becoming members. However, this was more than made up by new accounts entering the trial and then becoming members leaving us with a net gain which has allowed Old School to grow in members every day since the trial came out. The trial has been a success in regards to extra members it has bought to the community. The F2P to P2P conversion rate we have seen is as good as Runescape has ever had in the last 5 years.

The average subscriber played Old School for around 23 hours before becoming a member and as you can see from the graph below 90% of players who subscribed, did so before the 11th day of the trial. 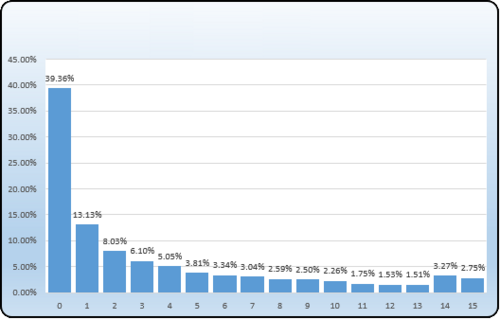 Due to the strong conversion rate and that most players are subbing well before the end of the trial, we have no plans to extend the trial for a longer period of time or offer a F2P version where you have access to it permanently. We think that giving permanent access to F2P will cause more members to unsubscribe without bringing any noticeable increase in new members which does help delivering what we are all aiming for; a vibrant and active community to support the stability of Old School. We know that for some of you the prospect of a permanent F2P system which is similar to how it was in 2007 is appealing and you will be disappointed that we are not heading in that direction. However, it is important to realise that the commercial environment has changed hugely in the last seven years and revenue streams such as adverts bring in a fraction of what they did back in the day.

One thing that did surprise us with the trial is that there were a significant amount of players who created new accounts, played them for a bit and then subscribed an existing account. These are returning players who went to the trouble of making a free account and then realising that they were enjoying themselves and then making their main account a member again.

Clearly, the next step to take in this trial is to remove the barriers for returning players so they can access the trial on their main accounts. So, from the 24th July until the 28th of August, any account which has not been a member for 90 days will be able to access the F2P servers for 2 weeks. This will be in addition to the trial continuing to work for new accounts.

While this second part of the trial is ongoing, we will be analysing the results to see how things go. In a similar fashion to the new account trial, we will be monitoring how returning players subscribe and what changes this trial will have on them. Once we have the data we need from this trial, we can look at what the next step will be.

How you can help

With the trial opening up for returning members this gives a great opportunity to get in touch with past Old School players. We were told by a lot of you that some of your friends didnt want to come back and start a new account and this is the ideal opportunity to let them know that now they can.

For all the clans out there, we will be allowing you to update your member lists in the clan cup if you want to invite some old clan mates to fight for you in the F2P clan cups. Lets get some impressive turn outs which will help push clans forward and show everyone what excitement you can get.

We hope to see a lot of players take advantage of this opportunity and to help even more, we are leaving the summer special offer of 25% off 3 months of membership open until the 28th July. So, they can get a good deal on their membership too.

At the end of the day, the more success we have with the trials, the bigger and better the community will become. You will see more players, make more friends and enjoy Old School even more.