This week in Old School we've got a bunch of farming tweaks as well as a few changes to the recently released world switcher. We've also got the new, summer special available through bonds. Let's get into the details.

Tool leprechauns are now happy to exchange your inventory-filling weeds for bank notes. This should make it a little easier to prevent your inventory overflowing when on a farming run.

When examining compost bins, rather than the same message every time, you will now see information about the contents of the bin.

Depending on whether the contents of the compost bin is rotting, has finished rotting, items are being put in or items are being taken out, the examine message will change to describe the state of the bin and what is inside it.

We've made some tweaks to the recently added world switcher based on feedback from the Old School community since it was released. 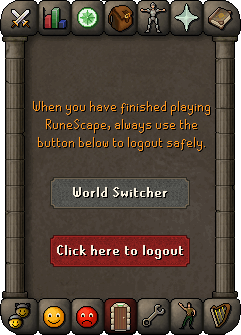 The positions of the button used to access the world switcher and the log out button have been switched and the colour of the world switcher button has been changed to grey. This change is based on a fair amount of feedback from the Old School community and should make the difference between the two buttons a bit more distinct.

The world that you are on will now be written on the world switcher list in a darker grey so you're less likely to click it and the 'Right click to set favourites' message is now vertically centred if you haven't set any favourite worlds.

We've had a lot of other promising suggestions too, such as showing the number of players on each world, showing your "ping", keeping your PIN unlocked as you switch, and making the scrollbar preserve its position. We'd very much like to add features like these in future. However, since they will require some game engine work, we have put them aside while the development of resizable mode is still ongoing.

When buying membership through membership bonds, the summer special is now available. 3 months of membership for 5 bonds!

Your bonds can be used to redeem the summer special offer through the bond interface, as seen below. 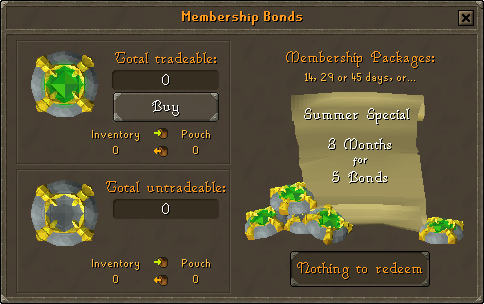