This week sees the release of the highly-anticipated Farming Timer Rework! Alongside that, many of the "QoL Month Week 2: Skilling" suggestions that passed the most recent in-game poll are also being released.
Farming Timer Rework

Keen farmers will have known that crop growth timer system in RuneScape has some irregularities, dating back to the original launch of the skill. Depending on when a player chose to log in & out, or hop worlds, they could wind up causing growth ticks to not happen, slowing down the patch potentially by hours or days. As Old School RuneScape players make such heavy use of the world-hopper, this could be very annoying.

Aside from growth ticks sometimes failing to run, the legacy system - first programmed in 2005 - was remarkably complex, making it quite unfeasible to identify specific problems inside it. Sometimes those were advantageous for players, such as the Gnome Stronghold fruit tree patch tending to grow faster than other fruit trees. However, they were more often drawbacks, especially where hardwood patches could be delayed for days.

In this update, we've deleted the entire timer system and written a new one. 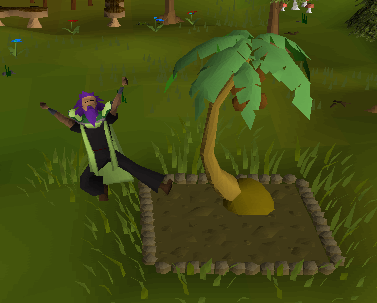 The main problem with the old system was that by logging in and out at unfortunate intervals, including world-hopping, you could make a tick never happen at all. That would make your crop take longer to grow - substantially longer, in the case of slow ticks.

The new system aims to solve that problem. Logging in and out should no longer stop a tick from happening to you. This means that once your seed is in the ground, you'll know roughly how long it'll take to get from its first growth tick to its fully-grown state.

You do still have to wait for the relevant ticks for your crop, though. The system should handle logouts and world-hopping far better than it has over the last decade, but we can't offer individual timers for each patch to let their growth start at the exact moment when you plant your seed.

As you can imagine, rewriting the entire growth timer system has been a very large job, with the potential to impact just about all the Farming code. We've given it a considerable amount of testing, but your patience would be very much appreciated if you run into problems. You can report bugs by right-clicking the 'Report' button in the game - it opens a bug report form that gathers extra info about your account's state to help the testers work out what's going on for you.

For a start, please don't be alarmed if your crop durations are disrupted by a few minutes as the system transitions from the old version to the new one.

The "Search" and "Attack" options found at the end of the Herbiboar hunting activity have been switched. "Attack" will now be the left click option.

The Jar generator options have now been switched to have the left click be Impling jars, and the right click be Butterfly jars.

If a player has the upgraded Fertile Soil spell unlocked but isn't carrying any Volcanic Ash, they will now be given the option to never see the warning again.

You will now catch 2 Karambwanji at level 5 Fishing. Every 5 levels past this level, you will catch another additional Karambwanji.

Scrolls of redirection now use a scroll interface when selecting which tablet to redirect to.

Players may now store up to 1000 buckets of each type of compost in the Tool Leprechaun. We've also allowed for empty buckets too! 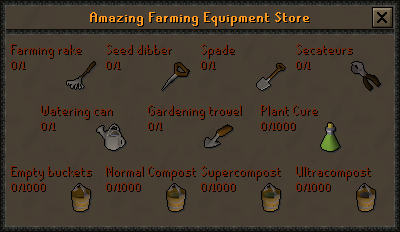 The "Activate" and "Inspect" options have been switched in the Tower of Life. "Activate" will now be the left click option. Additionally, players may now left click "Activate" on the Tower of life Altars with the required items in their inventory to automatically add them to the altar. 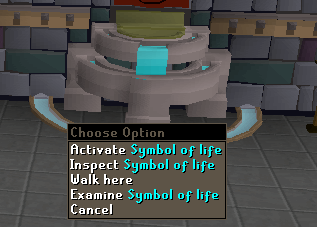 Slayer masters who ever so politely reminded you to only kill creatures on task whilst in their slayer cave are a little less polite. They will now only remind you once every 30 seconds to limit interruption.

The Digsite Pendant now has right-click options for each teleport location when worn.

Bolts can now be enchanted in sets of 10 via the make-all system. There is a slight delay between bolts being enchanted when selecting more than 1 to enchant at a time.

The guardian mummy at Pyramid Plunder has been given the ability to remove any remaining charges from the Pharaoh's sceptre.

The Pharaoh's sceptre can now be recharged with noted artifacts.

The dialogue the Guardian mummy has when selecting the "Start-minigame" option at Pyramid Plunder has been removed if you have already seen it once.

A chatbox message has been added to notify that poison resistance is about to expire.