ATTENTION ALL SKILLED FISHERMEN: We, The Spirit Anglers, need your help!

Seafarers have for many generations told chilling tales of the very sea itself coming to life. Such stories speak of waters amassing into colossal shifting forms that whip the waves into a raging storm. Perhaps you have heard talk of a vengeful Spirit of the Sea wantonly attacking sailors unprovoked? Or maybe you have heard, as some believe, that this Spirit is simply a guardian of the oceans, intent merely on fending off those who are disrespectful of its waters and wildlife?

Whatever the reason, talk of this Spirit is indeed correct. This is no mere story but in fact the work of Tempoross, the Spirit of the Sea. Much remains unknown, but our research thus far suggests the Spirit could be as old as Gielinor itself. And crucially, after lying dormant for centuries, it has finally awoken.

We of course seek to understand the reasons behind its sudden resurgence, but there are also more pressing concerns. The Spirit is coalescing once again, causing intense storms that make crossing its path a perilous task. As such, The Spirit Anglers have been formed to investigate, whilst keeping it subdued to quell the storm and allow safe passage.

We need your help! Join us and save the seas!

XP rates scale between Fishing level 35-70, and in this range should offer the best Fishing XP in the game, albeit at the cost of receiving fewer fish - and being more intensive. At level 35 we're aiming for approximate XP rates of 30k XP/ph, and at level 70 it will be no more than 55k-60k XP/ph.

A new port in the estuary by Al Kharid Bank will serve as the lobby area, providing a ferry to Tempoross.

The boss' health and energy will scale according to the number of players facing it.

To quell the storm, you will need to catch special Harpoonfish and load them into the Harpoon Cannons. Whilst loaded, these will continuously fire Harpoonfish at Tempoross, breaking it up and reducing its energy.

You can be sure, however, that Tempoross won't retreat without a fight! The boss will:

Placing a lightning rod on areas targeted by lightning will prevent any damage, and fires from missed strikes can be put out with a bucket of water.

Tempoross' energy must be reduced before the storm gets too intense, otherwise you'll need to retreat early. Once depleted, Tempoross will disperse into the whirlpool and begin gathering energy. This is your chance to permanently remove the Spirit Fish that energise it by fishing in the whirlpool. Once Tempoross' energy is full, it'll coalesce and attack once again. This cycle will repeat until you remove enough Spirit Fish that it can no longer rejuvenate. For now, at least...

Rewards are earned from Salvaged Crates that are dropped at the end of the encounter. These will always contains some resources but of course, should you prevail and successfully subdue Tempoross, you'll receive more resources and earn a chance of gaining unique rewards!

All Salvaged Crates contain varying amounts fish, the type of which depends on your Fishing level. As before, more resources are awarded if Tempoross is successfully subdued.

Much as the Spirit of Tempoross itself attracts fish, Spirit Bait is an untradeable resource that when automatically consumed while fishing, improves your chance of catching extra fish for no XP. This effect stacks with Rada's Blessing.

We are currently looking at a 50% chance of catching extra fish though we are open to feedback before any implementation.

This will be a common reward in varying amounts, though keeping a supply of Spirit Bait on hand will require regular encounters with Tempoross. 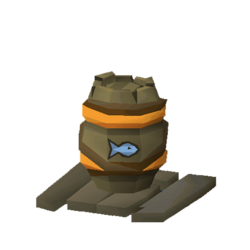 This barrel can store a total of 28 raw fish, and can store multiple species simultaneously. Fish can only be removed from the barrel at a bank, similar to the looting bag.

The Fish Barrel is untradeable and is fairly rare. 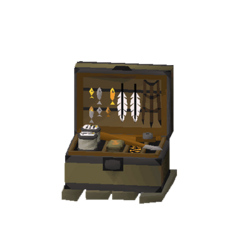 Additional storage for fishing equipment including rods, feathers, bait and the Angler's outfit. Equipment can't be used from the box and must first be taken out. This saves on Bank space and improves organisation.

The Tackle Box is untradeable and is fairly rare.

Tome of Water and Damp Pages 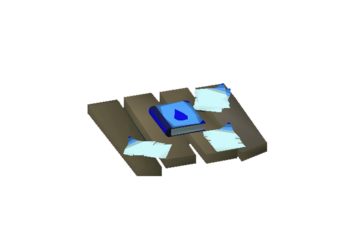 The Tome of Water is a new offhand magic item, similar to Tome of Fire (including stats), but for water spells. Water spells are unsurprisingly weak compared to the fire alternatives, so the goal of this item is less so about raw damage and more about utility.

The effects while wielding the charged tome are as follows:

The Tome of Water will require level 50 Magic to equip.

The Tome of Water is a rare reward whilst the Damp Pages are somewhat rare.

Now that you’ve heard all about the Fishing Skill Boss, the time has come for you to decide whether this is something you’d like to see in the game.

The following questions are not final. As with any blog that contains prospective poll questions, we’ll be making amendments as your feedback comes in. Check the changelist at the top of this blog for the latest updates!

We’re aware that the ability to store fish in a Fish Barrel or fishing supplies in a Tackle Box will make a difference for Ultimate Iron accounts in the way they train Cooking and Fishing. Perhaps you feel that your mode should change in turn with the rest of the game – or perhaps you feel that this update would make UIM mode too easy. We'll use the following questions to see if the UIM are comfortable accepting the Fish Barrel and Tackle Box alongside the Fishing Skill Boss update.

Only Ultimate Iron accounts are eligible to vote on the following two questions. Others will be forced to skip.

That’s all, folks! As always, we welcome all feedback on this project – you can tell us your thoughts on Twitter, Discord, Reddit, or the Official Forums.