Ahoy there, salty sailors! We've cast our nets wide this week with Fishing Trawler improvements, plus the first wave of Equipment Rebalance changes. Let's dive in!

There's a time and a plaice, but now seems like a cod moment to reveal changes to the classic Fishing Trawler minigame! Faster pacing, a new foe from the deep and some extra rewards? It's a net gain.

The first tweak you'll notice is the duration of the minigame – it's been halved, from 10 to 5 minutes. Snappy! This does mean that the rate of obtaining the Angler's Outfit has changed from 1/8 to 1/12 to reflect the shorter game times, which still makes it faster to obtain than before! Murphy's become more vocal too – he will bellow ship status updates, indicating how much time you have left. Heed his call and get cracking... 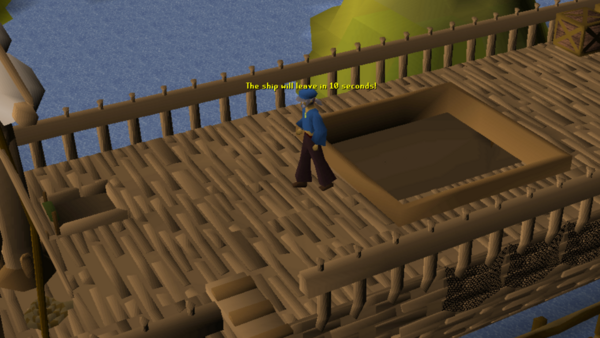 Murphy will let you know wherever you are!

Taking the place of the old Activity Meter is the shiny new Contribution Meter. You'll need to be actively participating in a game to reap the rewards of the sea, so get to work, landlubber.

Similar to the system in the Wintertodt minigame, the Contribution Meter will slowly fill up based on your actions. You'll need a certain amount of contributions to start earning rewards, but don't worry - you'll be notified when you hit the threshold! All activities onboard will give you some contribution, from bailing water to attacking the Kraken, and contribution does not deplete over time. At sea, hard work pays off.

The infamously grumpy Kraken is not too happy about you disturbing its waters. Now players will have to deal with this slippery sea creature at the same time as maintaining their ship! The Kraken's creepy tentacles will pop up next to your net, preventing you from gathering any more fish until it has been dispatched and the net has been fixed. Players on the upper level of the ship can use their axe to cut the tentacles, receiving a little bit of tasty Woodcutting XP for every successful chop. Once they are subdued, you'll need to use a Hammer to fix the hole. Not fixing the rail will cause the next tentacle to spawn sooner, so be quick because the Kraken will be back twice as fast otherwise!

It's not all bad news, though - attacking those pesky tentacles and fixing the railing will grant a larger amount of contribution than other activities onboard.

Now, you will often climb the ladder to find the offending tentacle has mysteriously vanished. That's because the sun can be temporarily blinding. Be assured, the tentacle is coming – so get ready to chop!

It's well known that the trawler has some minor graphical issues that would require large sweeping changes to fix. Sadly the tentacles are affected, so don't panic if the tip of the tentacle sometimes doesn't appear. You can still chop it as long as it's not sweeping.

Obviously our smaller fishy friends are smart enough to steer clear of the monstrous Kraken, so keep attacking because he can drastically reduce the fish/XP you receive at the end of the game. He will also tear the net when he sees it's fixed. There'll be between three and six Kraken attacks per game, depending on how many people are on your boat. Players on the lower deck will be notified when an attack is underway. If you are in need of an axe you can purchase one from the shop in Port Khazard along with any other supplies you may need. In a pinch, some supplies can be found in crates at the front of the boat. You'll still have to bring your own Rope and Swamp Paste though, so make sure you're tooled up. 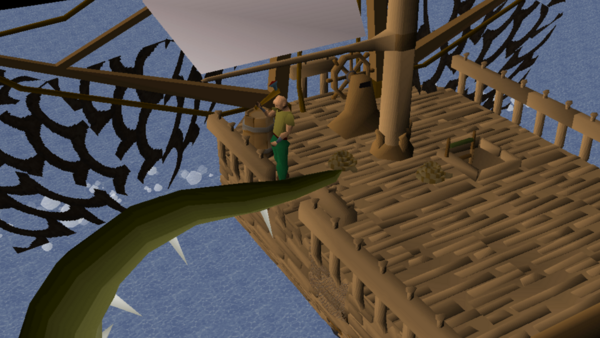 Come on Landlubber, let's get Kraken!

Some other activities aboard the ship will earn you a little XP. Repairing the net will yield you a pinch of Crafting XP, while fixing those Kraken-made holes will yield a smidgen of Construction XP (as long as you have a Player Owned House to construct, of course).

Once you've completed your trawling adventure, you'll be rewarded as per usual with fish and any XP from your haul. At full contribution, you'll find 50% more fish in your net! On top of that, fish caught with the trawler will now give 50% more Fishing XP than before. Fish will also give approximately 50% more Fishing XP for each fish obtained during that game.

Since the mission takes half the time to complete, you'll get twice as many chances to snatch a Heron pet. The chances scale with contribution though, so fill that bar up for the best odds. 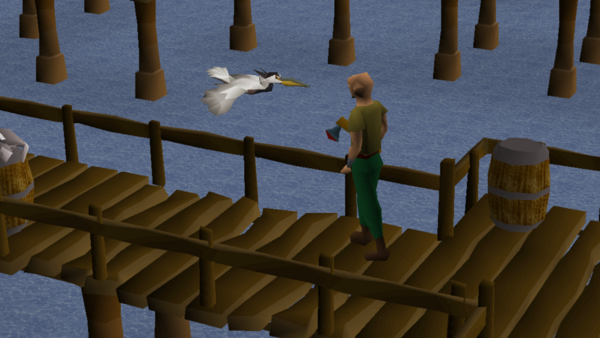 This update marks the beginning of the long-awaited Equipment Rebalance. These first changes are fairly small and were mostly welcomed by the community in our very first ERB news post.

Medium Helmets - Ranged Attack stats have been increased from -1 to 0. This includes:

Full Helmets - Ranged Attack stats have been reduced from -2 to -3. This Includes:

Platelegs/Plateskirts - Ranged Attack stats have been reduced from -7 to -11. This includes:

Platebodies - Ranged Attack stats have been reduced from -10 to -15. This includes:

Squareshields - Ranged Attack stats have been increased from -2 to 0. This includes:

Kiteshields - Ranged Attack stats have been reduced from -2 to -3. This includes:

Spears - Attack rate has been decreased to 4. This includes:

Warhammers - All Warhammers (including Dragon Warhammer) now require Strength to wield instead of Attack.

The following have also increased in strength:

Maces - Attack rate has been decreased from 5 to 4. This includes:

Hastae - Attack rate has been decreased from 5 to 4. This includes: 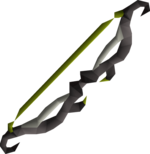 The Twisted Bow Prayer bonus has been reduced from +4 to 0.

The Dragonstone Gauntlets Ranged Attack has been reduced from -2 to -3.

Basilisk Knights have lost their Special Attacks, although the Basilisk Superiors retain it. These Attacks can also no longer be fully broken by auto-retaliating with Ranged.

That's it for the first wave of ERB changes. If you've not had a chance, check out yesterday's blog and send us your feedback on the next stage!

Thanks for your helpful feedback on the latest Last Man Standing map: Wild Varrock. With today's update you'll see:

We've made some smaller tweaks to Gielinor's latest dungeon: