Our Forthos Dungeon poll blog in June enjoyed a 90% yes vote rate. You can discover what lies below the Forthos Ruins in this exciting new dungeon filled with spiders, dragons, and undead druids. 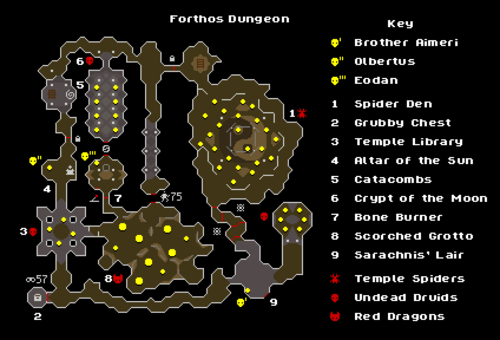 The dungeon located below the Forthos Ruin in Hosidius is ripe for exploration. Rooms you can find in there include The Grubby Chest, The Library, The Altar of the Sun, and the Sacrifical Chamber. How much of the new content and lore will you discover? 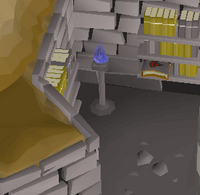 A new miniquest called 'In Search of Knowledge' has been added. Once you heal Brother Aimeri, he will give you information about tattered tomes found in the dungeon library. Each of the tomes can be filled with four pages that are dropped by creatures within the dungeon. You complete the miniquest by turning in all three completed tomes into the Arceuus Library. As a reward, you will be given a 10k XP lamp. The library will also reward you with 1k for any spare pages you may find in the dungeon. 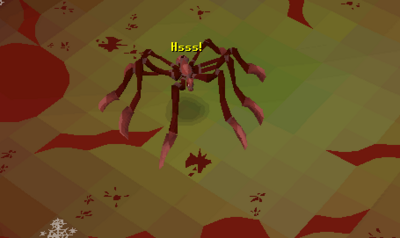 Sarachnis is a new mid-level boss aimed at players around 100 combat who want to try their hand at bossing. Defeating Sarachnis poses many challenges - she has a high resistance to ranged and magic attack and will leech some of your health for her own. If you are able to defeat her, you may be able to get your hands on some of her unique drops including the Giant Egg Sac and Sarachnis' Cudgel.

Words from The Developer 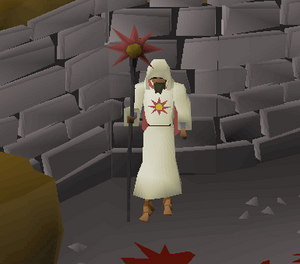 "The Forthos Dungeon has been my first project working in the Old School team. The dungeon originally started from a concept that Mod West pitched as part of the original Hosidius Rework. Upon reading the original design I loved the concept of the dungeon as it reminded me strongly of Taverly[sic] dungeon. One of the key things I wanted to replicate in this design is the idea that there are unique interactions that the player has to discover to gain access to different parts of the dungeon (i.e. the dusty key).

The core concept of the dungeon is to be a self-contained area where the player can stay for long periods of time, sustaining themselves from the drops they receive. The story and lore of the dungeon describes it as being home to the opposing sides of an old and forgotten druidic religion. However, this is no longer the case. The dungeon has been over-run by undead creatures and is now home to Sarachnis, mother of the temple spiders. Story and lore is to me, as important as gameplay and mechanics. Every NPC the player meets has to have a history or reason to be there, as well as a motivation or goal. Otherwise, they shouldn't be there at all.

When re-working Mod West's concept the first thing I did was decide which parts of the design I liked, what needed to be change and, more importantly, who is going to interact with the content. Originally there was just going to be a higher level spider in the Spider's Den but one issue I was aware of is the lack of bossing content available to mid-level players pre-Zulrah/Vorkath/Raids. As such, I decided to create a new boss which can help teach players the basics of bossing. Ultimately our game, comes down to two different PvM mechanics, changing gear/attack styles and/or changing prayers. This boss focuses on the prayer switching aspect without making it tedious to fight or overly punishing. Following community feedback, Sarachnis was also re-worked to not be an instanced boss so that players had the option to fight it with their friends.

Working on this project has been fantastic and it let me improve as a content developer. Having to create NPC interactions and combat scripts, new items, scenery the player interacts with, balancing content, writing stories... there's just so much to learn. Many of these problems involved having to research how existing content in the game has been created, and using that as an example. Working on this project has provided me with a huge amount of personal satisfaction, seeing my ideas come to life has been a lot of fun.

I look forward to the future projects I will be working on and hope everyone enjoys exploring and interacting with the content within the Forthos Dungeon. As always, feel free to send any constructive feedback to me via Reddit or Twitter!" 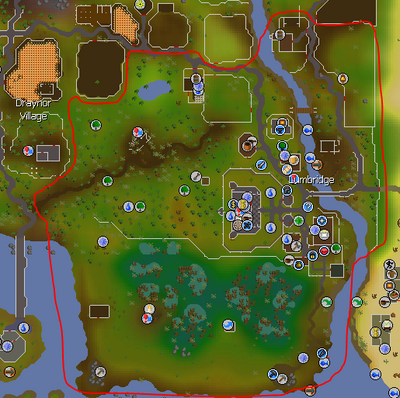 We’d like to let you know about a change to ‘Splashing’ in Lumbridge arriving in next week’s update.

For those who don’t know, ‘Splashing’ is a highly AFK Magic training method. By attacking NPCs with certain low accuracy Magic equipment, it is possible to only ever deal 0 damage. This means the NPC never dies, the player gains the cast experience for the spell and can remain in combat with the NPC for hours.

For new players that come fresh out of Tutorial Island, it looks odd to see players dressed in full Melee equipment attacking with Magic against low level NPCs such as rats. Whilst being a controversial aspect of the game, it’s not something we’re looking to get rid of altogether at this stage. But we are going to make this impossible in Lumbridge, and the surrounding area, to ensure it’s not something that new players see.

So as of July 11th, we’re removing cast experience for spells if your magic accuracy is so low that you could only ever deal 0 damage, while in the area defined in the map above.

It's not too late to grab a ticket for RuneFest 2019! To join other players and the JMods in celebrating RuneScape and Old School, head over to the official official RuneFest page.

This year's RuneFest is shaping up to be totally epic. We're bringing back Skill Chips and adding new activities, new entertainment, and all the biggest announcements from both the RuneScape and Old School teams. RuneFest is a celebration like no other. You can look forward to panel sessions with your favourite JMods and content creators, an awesome 200 PC LAN party, and goodie bags filled with RuneFest Loot.

Food and drink will be available on-site throughout the event, and as the day comes to a close we'll also be hosting a massive after-party for all our guests.

We're packing in plenty of surprises this year, and we can't wait to see you there!

Happy Fourth of July to all of our American players!