Update:Fossil Island Kudos Display, the Champion's Cape, and much more.

With Fossil Island just a week away, Varrock Museum has a handy new display to help you prepare yourself. There's also a chance for elite clues from Barbarian Assault, a prestigious Champion's Cape for those who've defeated the Champion of Champions, a much faster method of charging Iban staves and various other quality-of-life updates from the recent polls.

The staff of Varrock Museum love to award kudos to those who've helped them with their exibits[sic], but sometimes it's hard to remember exactly which tasks you have and haven't done. 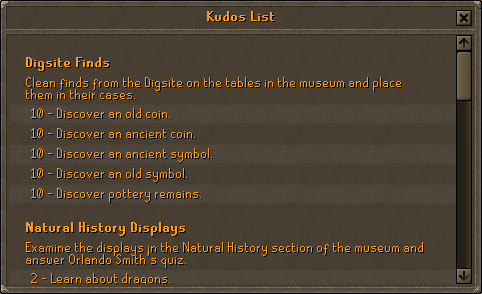 Visit the information booth on the ground floor of the museum, and use its new Check Kudos option to see what further opportunities you have for earning kudos. Remember, you'll need at least 100 kudos to travel to Fossil Island, and various features on the island itself require even more, so get your kudos up now to ensure you're not locked out next week! 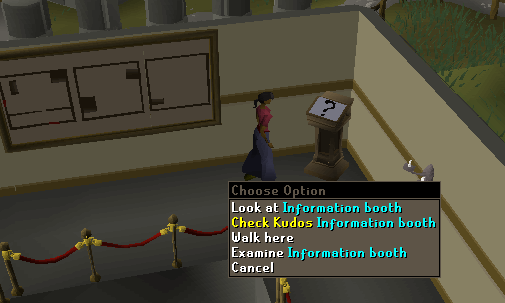 The info booth will be updated again when Fossil Island arrives, guiding you to the new opportunities for earning even more kudos on the island.

Leon d'Cour, the Champion of Champions, is honoured to bestow his prestigious Champion's Cape upon anyone who's defeated him and completed the Champions Challenge. 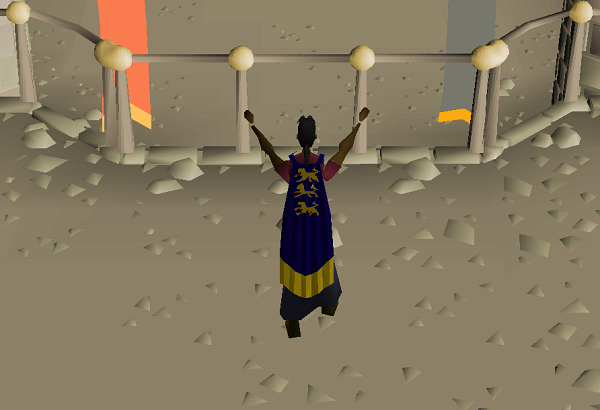 Speak to Larxus, under the Champions' Guild, to claim yours once you've defeated all 11 champions. The cape's just a cosmetic costume for now - looking mint, by the way - but players have suggested a few bonuses it could potentially have in future, and we'd be happy to give it a buff if one's wanted.

The cape can be stored in player-owned house costume rooms and mounted in the Achievement Gallery for the admiration of your guests. 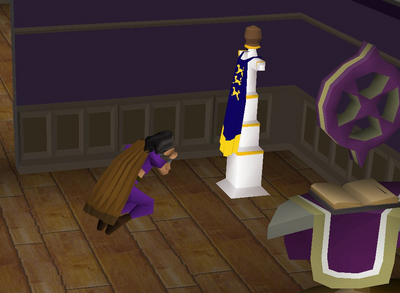 Commander Connad's Barbarian Assault rewards now have a 1/10 chance of including an elite treasure trail clue when you choose a high-level gamble, provided you haven't already got an elite clue at the time. It's awarded as a separate item in addition to his existing rewards.

The Dark Mage of West Ardougne is offering a new service of recharging Iban staves, once you've completed Underground Pass, thus saving you from an arduous trek down the Pass itself. 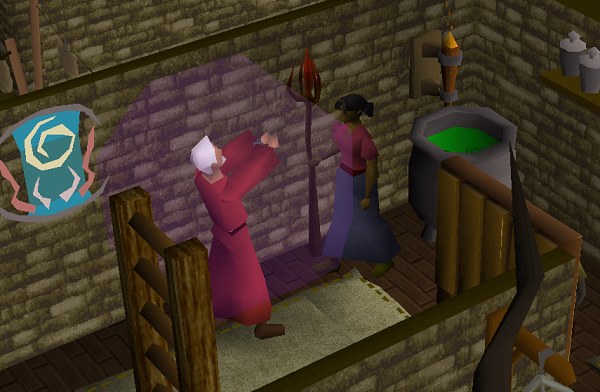 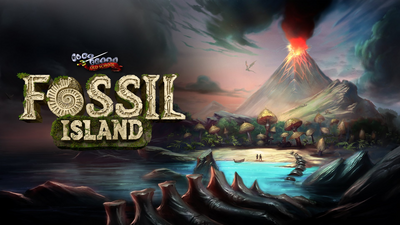 After years of planning, and months of development, there's just a week left before Fossil Island is upon us. Keep an eye out for the preview livestreams on our official Twitch channel - there's another one coming up on Wednesday 6th September at 3pm UTC.

If you missed one, past broadcasts are uploaded to our YouTube Channel and can also be found on our Twitch channel in the video section!

You've also got one final weekend to work on your entries for the Fossil Island login screen competition.

The Old School log in screen works by taking this image and mirroring it. The submission must be a .jpg, like the linked image. It must also be the same size. The flames and other window boxes will be placed on top of it in the positions they currently adopt in game, they can't be shifted down or sideways. The image is automatically mirrored.

Submissions should be sent to [email protected] by Monday 4th Sepetember[sic] and must:

The winner will be be announced with the Fossil Island game update next week. In addition to seeing their login screen in the game, the winner of the competition will also receive 12 months of RuneScape Membership!

To stimulate your creative juices, here's a few we've had so far: 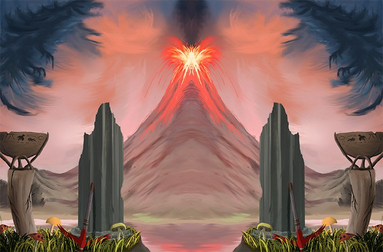 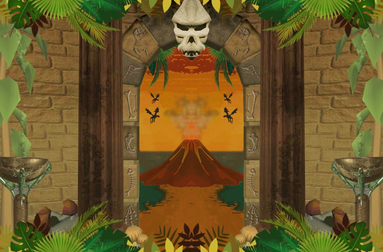 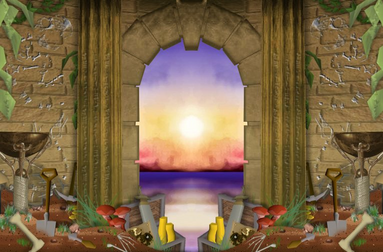 With all of our resources being poured into Fossil Island and Make-All over the summer, it has unfortunately meant that the Gargoyle Boss will be released later than expected. You can expect to see them circling the roof of the Morytania Slayer Tower in late September or early October.

Mod Ghost and Mod Kieren have also been working tirelessly on RuneFest, where we'll reveal all the exciting plans for next year, but they will be cracking on with the Gargoyle Slayer Boss as soon as Fossil Island is released. We'll keep you updated via our weekly Q&A's, as well as our news posts.

At Insomnia61, on Saturday 26th August, we ran a whole new kind of competition: Wilderness Wars. 245 soldiers, hand-picked by 5 generals, duked it out in the Wilderness for victory and a chance at the $15,000 prize pool.

Out of B0aty, Knightenator, MMORPGrs, Sick Nerd, and Torvesta, the ultimate victory went to B0aty's army who took the lead after successfully defeating the Armoured Foe to unlock an armour upgrade.

The competitive gaming doesn't end with Wilderness Wars, though. With the Deadman Autumn Invitational running 17th - 23rd September, we've got something truly special planned this time in the form of Deadman Mansions!

We're putting up 10 of our best Deadman streamers in two amazing mansions to battle it out throughout the week; with daily update streams on the RuneScape Twitch channel, it's going to be crazy! You'll also be able to find juicy Deadman Mansions content throughout the week on our Snapchat (RuneScapeOS) and our Instagram (oldschool.runescape) as well as the RuneScape Directory on Twitch.

In one house will be #TeamLUL, consisting of Alfie, Raikesy, Sick Nerd and Torvesta under the leadership of their Captain Faux. In the other will be #TeamCBS (Carried by Soup), consisting of Framed, Mankedupmage, MMORPGrs and Soup, led by Captain B0aty. 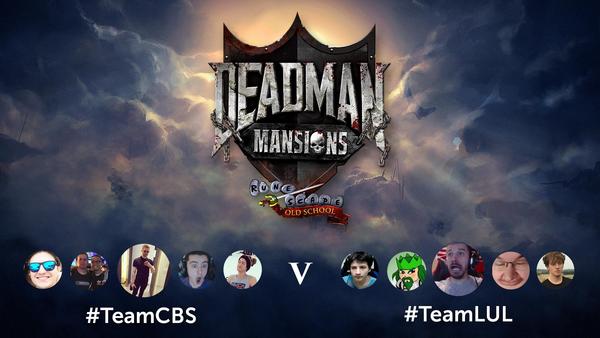 Our two teams will participate in intense daily challenges both inside and outside of Old School. Once completed, these challenges will award teams with points, which will reset daily. The team with the least amount of points at the end of the day will have to spin the Wheel of Forfeits and every member of the team must take part. These forfeits will be polled on Reddit, Twitter, and the RuneScape forums each day, so you can decide on the fate of the losing team!

We've also partnered with ASUS UK who are kindly providing full gaming rigs to each of our players in the mansions. Keep an eye out for some exciting competitions closer to the time...

The Mobile version of OSRS is making its way through development. We've launched some of its interface work today to let us do mobile testing outside the test environment. Most of this won't impact existing players much, but certain head-up displays in Barbarian Assault, Pest Control and Castle Wars have had components moved slightly to accommodate the forthcoming changes. 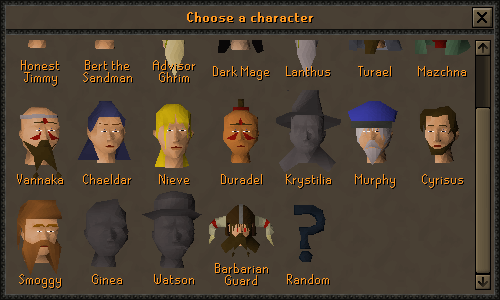