This week we’ve got changes and fixes for a variety of issues, including a balancing change to Zalcano that benefits players with higher skills, a usability change for various Treasure Trails and something to help Castle Wars games start faster. Behind the scenes, the team's making progress on the long-awaited hitsplat tinting job and the Hallowed Sepulchre of Darkmeyer. 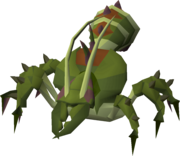 Accounts created through mobile can once again be linked to an email address. This can be done through the linking feature found in the account settings tab, and will allow the same accounts to be used on desktop. We'd like to thank our mobile players for their patience regarding this fix!

Tapping in the text line of the chatbox no longer opens the keyboard when on mobile. Instead, this can be done by tapping on your display name or the speech bubble icon beside it.