It has been slightly more than two months since the release of the Inferno, and as the number of players successfully besting TzKal-Zuk continues to increase, today marks the release of an Inferno Slayer task. Tournament worlds are re-opened in preparation for the PvP Championship which takes place in little over a week's time. Poll 56 has a strong emphasis on Quality of Life changes. Plus the usual range of patches, fixes, and QoL tweaks. 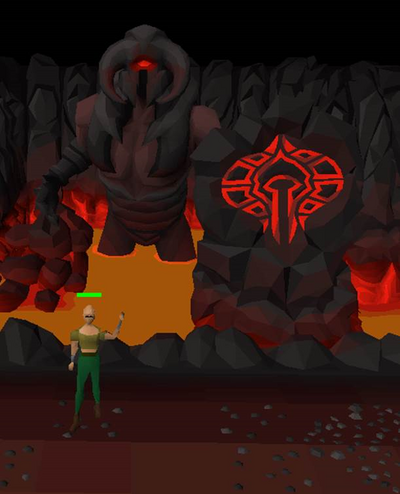 Firstly, it's important to specify that this task will be solely for those who have already killed TzKal-Zuk.

Today sees the release of the most challenging and rewarding Slayer task yet. Upon being assigned a TzHaar task, players who have successfully already done so will be offered the chance to again challenge TzKal-Zuk.

Completion of this task will yield 100,000 Slayer xp from killing TzKal-Zuk, and it offers an increased chance of the Jal-nib-rek pet.

The Slayer helmet damage and accuracy boosts will be effective against all monsters inside the Inferno, and naturally the Expeditious Bracelet and the Bracelet of Slaughter do not affect the task. Dying during the task or leaving the Inferno prior to completion will see the task wiped, as with the TzTok-Jad task.

Worlds 408 and 409 are being converted to Tournament worlds in preparation for the PvP Championship. As the PvP Championship is our most ambitious non-Deadman competition to date, we felt it fitting to allow the participants to practice in an environment as close to the Championship as possible. Naturally everybody else is encouraged to join the fray and test their mettle too!

As with prior releases you'll be given the freedom to select your own stats, and you'll have a wide range of equipment to choose from. The Tournament worlds will be active until the 17th August, so you have two weeks to hone your combat prowess!

Be sure to watch all of the action from the PvP Championship on twitch.tv/runescape on Saturday 12th and Sunday 13th August!

As the release of Fossil Island draws nearer, we've been hard at work implementing various requested fixes and quality of life changes to improve your playing experience.

Colour tags have been added to the following messages

Poll 56 has a strong emphasis on quality of life changes. Recently we asked what you'd like to see changed to improve your playing experience, and here's what we'd like to offer:

Question: When on task, should the Slayer helmet effect be applied when attacking respiratory systems encountered during the fight with the Abyssal Sire? This would apply the accuracy and damage boost of the Slayer helmet.

Question: Should the stock of teleport cards in Diango’s Toy Store be increased from 10 to 100? Teleport cards are used to charge the Chronicle which provides teleports to the Champions’ Guild.

Question: Should a barbarian fishing spot be added to the top of the waterfall the Chambers of Xeric?[sic]

Question: When picking up ammunition which you already have equipped, should that ammunition be automatically equipped rather than going into your inventory?

Question: When picking up runes found within your rune pouch, should the runes automatically be placed into the rune pouch rather than going into your inventory?

Question: Should the capacity of the bolt pouch be increased from 255 per slot to 10,000 per slot?

Question: Should a chatbox message be added which will inform you that the effects of a super-antipoison/antidote++ are about to expire, and another added to inform you when it has expired?

Question: Should a right-click ‘Chase’ option be added to all cats?

Question: Should a left-click option be added to the animation room of the Warriors’ Guild which would automatically place the highest-tier armour to be animated?

Question: Should we remove the retreat of the animated suits of armour within the Warriors’ Guild?

Question: Currently when withdrawing doses of potions from the barrels in the Nightmare Zone it will provide you with new potions in your inventory. Should we change this so that it will fill up already existing potions of a lower dosage? For example: if you had a (1) Overload in your inventory, and you withdrew 3 more doses, you would currently be given an additional (3) Overload. With this change your original (1) potion will be made a (4) potion.

Question: Should an additional option be added to the Ring of Duelling[sic] which would teleport you closer to the lobby of the Duel Arena? The existing teleport to the entrance would remain.

Question: Should the high gamble option at Barbarian Assault offer a chance at rewarding players with Elite clue scrolls?

Question: Should elemental rune packs be added to the TzHaar-Mej-Roh’s store in Mor Ul Rek?

Question: Should successfully defeating the Champion of Champions, Leon d’Cour, be rewarded with a cape similar to Toby’s in Varrock? Image

Question: Should a grapple shortcut be added to the Observatory to allow ease of access once players have completed Observatory Quest?