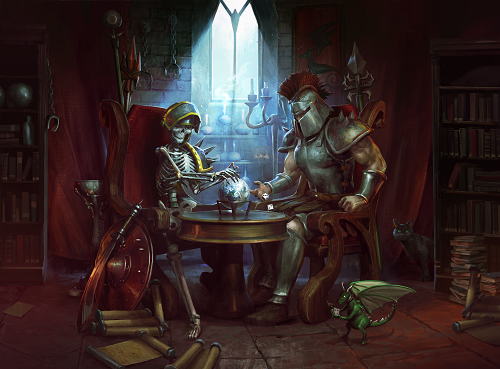 What if you could be the first player to get a Fire Cape? Or defeat the Barrows Brothers? Or max your account?

Leagues is a brand new game mode that's your opportunity to start from scratch in a race to be the first to complete major Old School achievements – but there’s a twist. Each limited-timed League has its own ruleset designed to test your skill, your determination, and your Old School knowledge. Level up as fast as you can, complete tasks, and earn points to customise your experience. You’ll have to use all your skill, knowledge, and determination to build a workable strategy – before someone else snatches victory from you.

Stripped of your items and levels, you'll complete hundreds of new challenges in ways you never thought possible. Conquer a variety of tasks to gather points for relics. Break free from the meta, and strategize your every move. The more tasks you complete, the more points you unlock, and the quicker you can prevail. 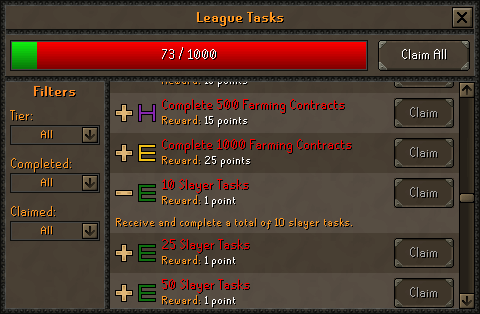 The above image is a mock up of the Task System interface. The tasks and point allocations are subject to change.

The path to victory has twists and turns like never before. From the very beginning, you will forge your journey and set yourself apart from your opponents in order to complete as many tasks as possible and unlock relics, each more powerful than the last. Choose between multiple buffs such as resources harvested are doubled or resources harvested are automatically banked that last for the rest of the league. But be careful - once a relic is chosen, there is no turning back. Choose wisely, think quickly, and trust completely; in return, may you find the ending you deserve.

Valiant efforts in the leagues should be rewarded with more than just a place on the HiScore page. We will offer never before seen rewards for both Leagues and the main game.

Your league-to-league rewards will persist only in future league worlds. They are unlocked automatically based on which reward tier you achieve.

The cosmetic rewards which carry over to the main game can be purchased from an in-game shop in exchange for the League Points you’ve earned.

We will present these rewards in a future poll blog.

Leagues originates from a concept first raised by Mod Kieren on a Q&A some months ago. You might have heard it referred to as ‘Seasonal Old School’. Leagues was born from everything we've done before: we've learned from all the good things, we've learned from all the bad things, we've watched every second of Swampletics! And now we're finally ready, it's time for you to be too!

Your feedback will help shape Old School RuneScape Leagues. Design tasks, create new rewards, or compete - you can be part of something great. Good luck and stay tuned in the next Q&A for some in-depth discussions around Leagues.