Have you spent months staring at a stack of Serum 207s which you just can't be bothered to drop one-by-one? Perhaps your bank is in need of a big clean up but you simply don't have the time? Well, we've got the update for you!

If you've ever wanted a quick way to clear out items from your bank, we've got a treat for you. The item incinerator can now be toggled on inside your bank for the quick disposal of items! 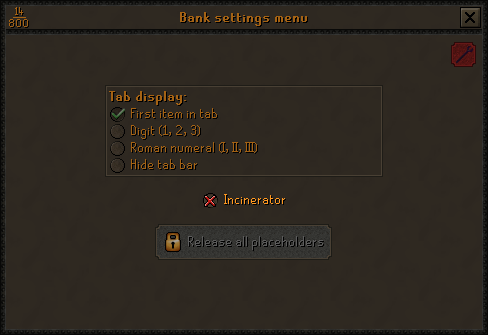 Following this, a new icon will appear in the bottom left of your bank interface. This is the item incinerator. 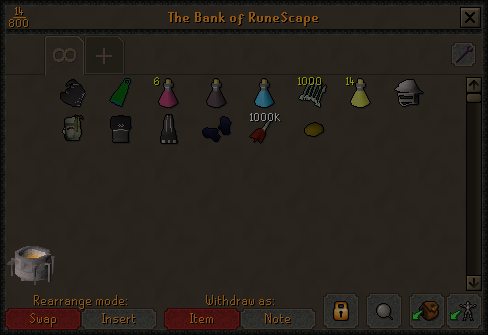 To incinerate a stack of items, simply drag it over the item incinerator icon and release your mouse button. You will be asked to confirm the incineration of your items. 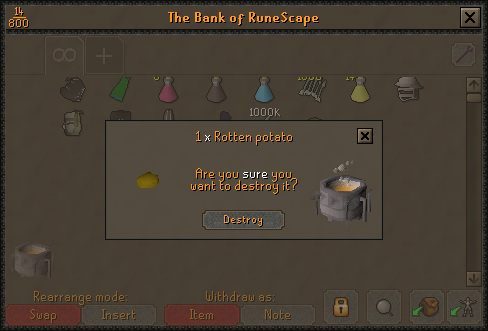 Once you confirm you would like to destroy your items and click the destroy button, your selected items will be permanently deleted.

Items which are incinerated are permanently destroyed. Be very cautious when using this feature and always double check what you are incinerating.

Also, keep in mind that the item incinerator destroys entire stacks of items, not just one from a stack.

Players have commented that the incinerator makes it easier for a hijacker to destroy your items. This isn't new, however, as anyone who got past your Bank PIN would already have had access to steal or remove your stuff; you could hardly rely on them to get bored before they did anything spiteful!

We recommend very strongly that you make sure you've got a secure password and Bank PIN. You should also enable the RuneScape Authenticator for your account - preferably using a separate device to generate its codes - and ensure the email address you're using is properly secure too, such as via two-step verification.

Previously, the items you keep on death were chosen based on the high alchemy value of your items. This often led to players losing their most valuable items in place of lower value items which hold a higher alchemy value.

Items kept on death are now decided based on Grand Exchange value. 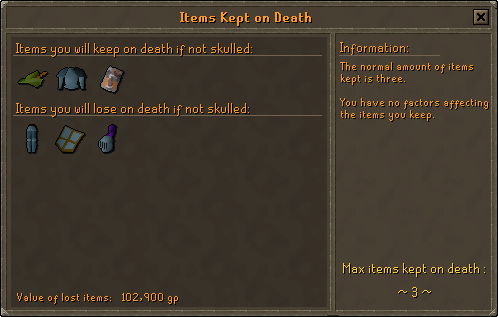 The items lost on death screen, accessed via the equipment tab, shows you which items you are risking as well as their estimated Grand Exchange value.

Please note: untradeable items have been given estimated Grand Exchange values, meaning it is possible for them to be kept instead of tradeable items on death. Be sure to check your items lost on death screen before risking any equipment, untradeable or otherwise.

It is also worth noting that the temporary death mechanics, providing an extended period of time to retrieve your items and the protection of untradeable items, are still in place. We will be sure to give plenty of notice before these mechanics are changed.

Adventurers brave enough to take to the deep wilderness with amulets of glory in hand now stand a chance at getting something rather special. There is now a 1 in 25,000 chance of receiving an amulet of eternal glory when charging the amulets at the Fountain of Rune.

The amulet of eternal glory works just the same as your usual amulet of glory, however it has unlimited charges. The amulets will be very hard to come by, and will require substantial risk to obtain.

If you are interested in one of these amulets but you don't fancy risking your bank to get one, you'll be able to purchase one from another player.

If you're feeling brave and want to try your luck at the Fountain of Rune, now is the time to do it!