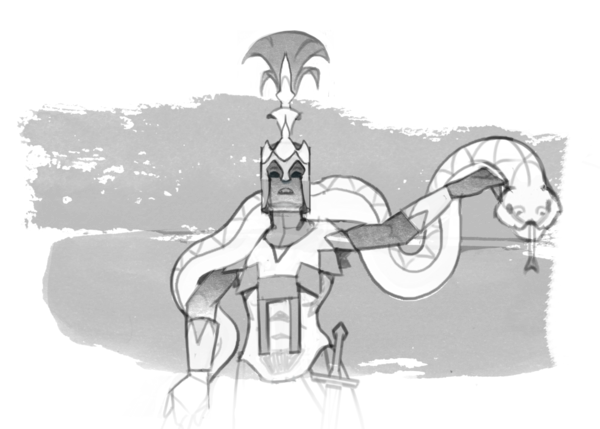 On any ordinary day, the Grand Museum of Civitas illa Fortis would be bustling with visitors hoping to get a glimpse at the rare treasures within – the icon of Ralos, the armour of the Cloud Titan and, of course, the Royal Accord of Twill, finally taking pride of place in the glass cabinet found in the Hall of Kourend's centre.

Queen Zyanyi Arkan stood by the glass, looking over the aged parchment with a practised eye. The fat, pale snake that habitually hung around her shoulders flickered its tongue and gently bumped its snout against the glass.

“You can hardly tell that it’s a replica,” she remarked. The curator beside her smiled but didn’t seem quite sure what to say – she was too busy eyeing the snake, no doubt hoping it had already had its lunch. The pair of Kualti on either side of the Queen impassively stood by.

“Of course, after the last incident I don’t blame them in the least for sending a copy,” the Queen continued, “It’s really quite fantastic workmanship.”

The third Kualti, Yorah, was doing their level best to remember their training and remain still as a statue.

In just under an hour, Yorah would meet the High Priest to hand over their predecessor’s dagger and cement their place as one of the Kualti. All those years in the army, and the rigorous training they’d undergone as a Knight of Varlamore, had been building to this very ceremony.

But Yorah felt as though Ozomah’s dagger was burning a hole through the ceremonial pouch hanging from their waist. It was all they’d thought about since they’d received it that morning – if it was lost, then so was Ozomah’s memory… along with Yorah’s place in the Kualti. Every so often they felt the sudden urge to check that it was still there – although of course, they didn’t act on it. A Kualti must never be distracted from their one, crucial purpose: to protect the Queen.

Nonetheless, a distraction there was – a flash of white, between the columns that told the story of Kourend’s history. A person? Yorah’s eyes narrowed. Nobody except the Queen, her Kualti, the curator and the High Priest had clearance for this area – but none of them had any reason to be sneaking around.

Subtly, so as not to distress the Queen, they craned their neck. Yes – moving down the room just past the Column of Imafore’s Betrayal was a bone-white cloak. As soon as they saw it, it vanished again. Yorah made eye contact with one of the other Kualti and nodded, firmly. One of them whispered something in the Queen’s ear. Her snake tilted its head, curious.

“An excellent suggestion,” she said, turning towards the clueless curator, “I’d like to see the Tempestus model. It’s new, isn’t it?”

The Queen effortlessly hefted the snake across her shoulders and the group eased away. Yorah let themselves relax somewhat. Whoever the interloper was, the Queen was at least out of their reach.

Silently, Yorah readied their hasta and advanced down the centre of the hall, eyes darting to and fro. Another flash of white – just a ray of light reflecting off an old Kourendian shield. Another! Now Yorah was certain. They were not alone.

A creak of ancient wood pinpointed the intruder’s location – the Dagger room, at the end of the hall. Yorah’s heart leapt into their mouth. If you planned to steal a Kualti Dagger, there was no better time to do it than an initiation ceremony; the one time when every eye in the kingdom would be otherwise occupied.

In a single, graceful movement they kicked the door open, ready to strike.

“State your business!” they called, “This is a restricted area!”

Nothing. Only the rows and rows of Kualti daggers, arranged neatly by the ruler under which their owner served. A glittering array of gold and blue – and nothing else. Yorah glanced up at the ceiling, found it equally empty, and stepped cautiously into the room.

It was impossible, they thought, as they slowly peered behind each cabinet. They’d seen the intruder enter – and the only exit was the door back to the Kourendian Hall. There wasn’t even a window to jump through. No human being could hide so well.

“Reveal yourself and state your business!” Yorah called out again. The sound bounced off the cabinets, echoing off the empty walls.

With a sudden jolt of fear, Yorah clasped their free hand around the pouch at their waist, feeling for the handle of Ozomah’s dagger. It was still there, cold and ownerless. In a matter of hours, it would sit in one of the many empty spots in Zyanyi’s cabinet; another memorial to a fallen Kualti.

Yorah exhaled and felt their heartbeat slow to normal. There was no danger – perhaps they’d never seen anything to begin with. Or perhaps the figure in white was Ozomah’s spirit, clinging on in hope of one last test. It was as good an explanation as any.

Outside, they could hear one of the Bards from the College striking up a song. The crowd was waiting, and no doubt the Queen was waiting too. At least none of the other Kualti had been there to see them barge in on thin air. Shaking their head, they left the room and closed the door behind them.