Update:Kourend Chronicles: The Man In The Tower 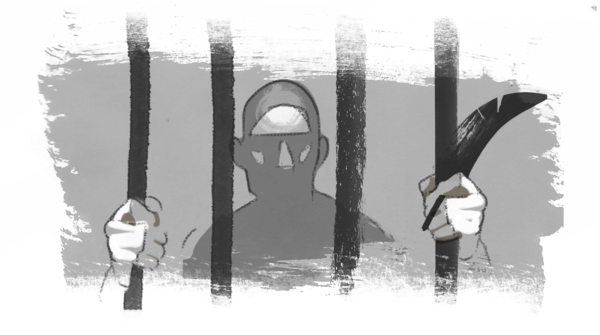 The man in the tower had been there a long while, or so he’d been told, and yet Eek C'ho had never seen him before now. He looked much like any other human – dry, delicate skin, about six feet tall, and with a crop of untidy white hair atop his head.

Eek C'hos job was to bring the man food, once in the morning and then again as the sun went down, and then leave him alone. He was not supposed to wait while the man finished eating. He was definitely not supposed to talk to him.

But some two weeks into Eek C'ho’s new role as the man’s sole guard, he spoke. And Eek C'ho spoke back.

“Have you ever heard of a journal?”

Remembering he wasn’t supposed to speak, he snatched up the empty tray and scuttled back to his assigned dwelling, where he spent the rest of the day cringing whenever someone said his name in case it was followed by ‘the Yo’kal ahk wants to see you’.

But nothing happened. When Eek C'ho returned in the evening with the usual meal of greenish potatoes, all the man said was “thank you”.

Things continued that way for a while – the food arrived, the man said “thank you”, and the empty tray was taken away. If the Yo’kal ahk knew of Eek C'ho’s transgression – and he surely did, for the Yo’kal ahk knew everything that happened in this tower – then nothing came of it. So, one evening, Eek C'ho decided he’d try talking some more.

“What isss a journal?” he asked, as the man dug into his meal with his funny little pink claws.

Swallowing the mouthful of potato and wiping his mouth, he answered: “A journal is a sort of book.”

Eek C'ho pondered this for a moment.

“Do you know what a book is?” the man asked.

Eek C'ho couldn’t help but laugh, loud and crunchy, and the man started back. Of course Eek C'ho knew what a book was – the tower was full of them.

“We have lotsss of booksss,” Eek C'ho said, once he’d managed to control his laughing fit. Perhaps books were very rare in the human’s dwelling. After all, they looked very delicate compared to the stone tablets the shamans had taught him to read from.

“Could you get one for me?” the man asked. His voice was very quiet. “And something to write with?”

Eek C'ho thought for a moment.

“I can try,” he said, although in truth he had no idea if he was allowed to do any such thing. The Yo’kal ahk had been very clear that he didn’t want any more tomes getting covered in slime. There’d been a whole announcement about it. But Eek C'ho had been instructed to bring the man food, water, and ‘whatever else he required’. Did humans need books?

In the end he chose a battered looking volume from the bottom of one of the shelves near the kitchen. It was nothing of value, and the pages were already wrinkled and yellow, so he reasoned it wouldn’t be missed.

Finding something to write with was a little trickier – Eek C'ho had observed the human closely enough to figure out that he couldn’t possibly be using those pathetic little claws to carve out letters, and the pages of the book he’d found were so thin and fragile that he was sure something light must have been used to write on them.

But Eek C'ho’s dwellingmate, Ekr’a, was assigned to cleaning duty. He picked up all kinds of interesting things. So when Eek C'ho asked him how human books were written, he produced the right tool straight away – a feather! Ekr’a showed Eek C'ho how the humans – and even the Yo’kal ahk – would dip the feather into some black, wet substance and then use it to make words on all sorts of things. It was just what the human was looking for, and Eek C'ho wasn’t even angry when Ekr’a made him promise to trade him all his chilli potatoes at dinner – he was just excited to see what the man in the cell would do with it.

As Eek C'ho had expected, the man was delighted with his book. He could be seen scribbling in it at all hours of the day. Eek C'ho even began visiting outside of his designated feeding times to see him writing and hear his stories. At first the man didn’t much like talking, but as Eek C'ho’s visits became more frequent and his questions bolder, he began telling all kinds of tales about the outside world. Mountains where blue flames burned. A terrifying monster that froze everyone who came near. Red trees that grew so high you couldn’t see the top.

“Isss that what’sss in your journal?” Eek C'ho asked him, after one particularly interesting description of a place where enormous trees reached up into the sky. “The placesss you’ve been?”

The man – Eek C'ho had learned that his name was Magnus – shook his head and closed the book.

The fateful day came some months later. Eek C'ho had noticed, over his last few visits, that Magnus had been more subdued than usual. His eyes were red and bleary, and his skin was so pale that in the light from the crystal beside his cell it seemed to glow an eerie blue.

Eek C'ho waited patiently as Magnus chewed his potatoes and eventually handed them back only half-finished. He suspected there would be no stories today, so he nodded and turned to leave, only for Magnus to reach out through the bars and grab him by the arm.

“I need your help,” he hissed, handing Eek C'ho the journal. The months of wear and tear had made it even shabbier than before, and several pages had come loose from the binding.

“I need you to get this outside,” Magnus said. “To the rest of Kourend. They have to know …” He began to wheeze and cough.

“They have to stop him.” Magnus finished, when his coughing fit had subsided. Eek C'ho wordlessly handed him a cup of water, Eek C'ho hesitating before he answered.

“I can try,” he said. He wished he could say more, but that seemed good enough for Magnus. The man let go of the journal and sat back down on the patterned flagstones of his cell.

“Thank you,” he croaked.

Eek C'ho scurried out of the prison clutching the journal tight to his chest.

What was he supposed to do? No lizardman had ever left the tower – it was a warzone out there, fit for only the strongest warriors. If the humans caught any one of them off-guard it could spell disaster. And surely the Yo’kal ahk would not approve.

But Magnus was his friend.

Eek C'ho froze. Stood on the steps before him was the Yo’kal ahk himself. He reached out a bony claw for the journal. For a wild moment Eek C'ho thought about keeping hold of it, but then the treasonous thought was gone. What was he thinking? The Yo’kal ahk snatched up the book and opened it, turning his cold blue eyes over Magnus’ work.

“Hm. Yes, this will do nicely,” The Yo’kal ahk said. He snapped the book shut with a dull thud, turned, and stalked back up the stairs. Eek C'ho’s heart sank. The figure paused and looked back towards him.

“Excellent work getting him to talk, by the way. You’ve been most useful.”

Then, with a laugh that echoed around the tower’s walls, the Yo’kal ahk left, taking the journal with him.

The next day, Eek C'ho found himself promoted to the Yo’kal ahk’s personal guard. He never did see the man in the cell again. But every so often, when he looked out the tower window at the sprawling human settlements in the distance, he wondered what ever had become of Magnus’ journal – and what terrible danger he was trying to warn them about.