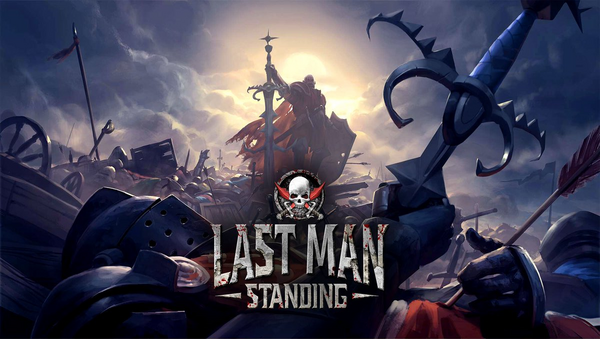 Last month we changed casual games of Last Man Standing to begin with a minimum of 4 players rather than 24. We also reduced the competitive and high stakes modes from 48 to 24.

In our State of PvP blog in May, we discussed a number of changes that could be made to dramatically improve LMS. Now that games are easier to start with a few friends or large groups, it's time to test those changes designed and implemented by Mod Roq and Mod Maz.

We're opening five beta worlds that offer Last Man Standing with the new changes. The beta will take place on a Tournament/Unrestricted world. Remember - this means you won't have your regular save profiles, meaning anything done during the beta won't affect your main account in any way. For convenience, the player attack option will be set as "always left-click" by default. Bear in mind that this also means you will need to set your F Key options each time you log into the beta. Additionally, any wins in competitive mode during the beta will not affect your rank.

Because the existing version of LMS cannot be live at the same time as the beta version, the following LMS worlds will become normal worlds for the duration of the beta: 425, 317, 326, and 393.

Click or tap each section by the drop down menu to read about that aspect of the LMS beta:

Upon login into the beta, you will receive a random set of stats. When you start a game of LMS, these will be boosted to 99 except for Defence which will be changed to 75. This is to test that the automatic stat changes when you enter LMS work correctly.

Players will no longer start with just a beginner weapon. Instead, each player starts with a full tribrid setup. At the beginning of each game, all players will have the following items equipped:

In their inventory, each player will find these items at the start of each game:

Players will no longer receive loot from locations such as drawers and cupboards - only chests. These chests will now require a bloody key to be opened, which are still dropped when you kill an opponent. When looting a chest this way, your loot rolls once on an offensive loot table and once on a defensive loot table:

If a player is in the final five survivors, they'll start to receive bloodier keys as a drop. These roll on the same defensive loot table as the standard bloody keys, but also roll on an upgraded version of the Offensive loot table which contains the following:

Loot crates will still appear on the map as before, but now roll on the upgraded offensive loot table. 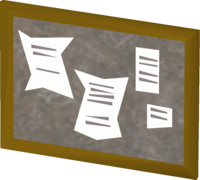 The entry fee and reward systems for each mode will be as follows:

Competitive (requires 24 players to begin and affects your rank)

In High Stakes and Competitive games, players will receive 5 points for taking part, 10 points per kill and an additional 30, 20, or 10 points for placing first, second and third.

Let's talk rewards. Currently, LMS doesn't offer any rewards outside of the GP prize awarded to winners of high stakes games. This is unusual for a mini-game given that they typically offer rewards that are also useful elsewhere. Below is a list of proposed rewards, most of which have been suggested by the community. Let us know what you think and if you have any ideas of your own, feel free to send them our way!

In the currently retired Deadman mode, there was a set of armour that players could purchase for blood money. Unfortunately because the armour wasn't very good and blood money could be farmed, the armour was not widely used. So our first reward idea is to remove the stats from the pieces (top, bottoms, and cape), making the set cosmetic only, and add them to the LMS store.

While in the Wilderness (under level 20), some untradeable items will break on death instead of being lost. Players can take these broken items to Perdu who will repair them for a fee. In order to encourage use of these items in deeper Wilderness, we propose a consumable scroll that can be handed into Perdu. He would then use it to enchant one of these items.

This is expected to widen the range of items used in the rest of the Wilderness. Because players will no longer have to go get these items again and possibly endure the grind again (defender, void etc), you're more likely to see them appear.

The cost of the scrolls is subject to balancing and testing.

For Many years Castle Wars have offered the 3 God Halos as rewards. But what about the other gods? Armadyl, Bandos, Zaros and Brassica have been underrepresented in the headwear department. As a result, we would like to offer 4 brand new Halos as rewards. These will have the same stats as the existing halos, but will allow you to support the god of your choosing.

For the top 5 players in any competitive game of Last Man Standing, we would like to offer an XP reward, through a tome or token that can be redeemed in a combat skill of their choice. The XP awarded will be 35 x skill level.

This number is subject to balancing through testing and the beta phase.

These would be similar to the capes awarded for Chambers of Xeric or Theatre of Blood completion milestones. We would like to add two separate versions: one to show games played and another to show games won.

For a long time now OldSchool has had the Event RPG and more recently received the Ham Joint as quick weapons to help train certain pure builds. We would like to offer another weapon to add to this list but one that is a bit more thematic with the regular weapons of Old School.

This weapon will attack once every 3 ticks and be one handed.

In early 2018, players gained the ability to add a Saradomin's Light to a Staff of the Dead. This added some variety as a high level magic weapon that could cast Saradomin Strike. But what about Guthix?

With this reward, players would be able to take the Guthixian Icon to Juna. She would then infuse it into a Staff of the Dead, creating the Staff of Balance,

The staff of balance would have the same stats as both the Staff of Light and Staff of the Dead, and be able to cast/autocast Claws of Guthix.

The bolas is a thrown ranged weapon that would require 70 ranged to wield. When a bolas is thrown as an auto-attack, it binds the player for around 10 seconds. It is possible to miss the bind as with other attacks from a weapon. Thrown bolas cannot be retrieved from the ground or by any Ava's device.

The bolas will carry the same offensive stats as a rune knife but with an attack speed of 6. The attack range of the bolas is 7.

The Staff of paralysis is a one-handed staff which requires 70 magic to wield. The staff would hold up to 1,000 charges and require 3 Nature, 4 Earth, and 4 Water runes per charge.

On each cast, the staff of paralysis would have a 1/10 chance of turning off your opponent's run. The staff would have a maximum damage of 10 and has an attack rate of 5.

In LMS only cosmetics

When we're good at something, we like to show it off. With this in mind, we want to offer the ability to unlock cosmetic changes to the starting equipment described earlier. For example, you could change your mystic robes to light/dark/dusk, your ranged equipment to gilded, and your rune equipment to any of the god and gilded variants.

We have heard your suggestions on some other items, such as moving imbues, Korasi etc. However, with other discussions taking place, we have decided that these may be better suited for other upcoming content.

One suggestion we've had had been to add negative XP reward lamps as an LMS reward. Since they were last polled, there has been continued demand for and discussion around the topic. These would allow players to remove a small amount of experience (~500xp) from a combat stat below level 50. Doing so means players could 'fix' their accounts by removing unwanted experience.

These lamps could potentially be used to remove XP awarded from quests, increasing range of account builds possible for PKing. This would open up a range of exciting possibilities to shake up PvP.

However, there is also a technical issue to overcome. Currently, XP removal has very strict restrictions built into the game engine to minimise the risk of accidental XP loss, which could be very serious for a player's account. Now that players would be able to trigger it arbitrarily, we would need the engine changed to ease these restrictions while still providing the necessary safety checks.

Let us know what you think of the idea. If the suggestion is taken forward, negative XP lamps would be polled again before being added into game.

All other rewards above and any that are added will also be polled. Before then, let us know your thoughts and suggestions!

Here is a list of smaller improvements made to the minigame:

The option to organise your starting equipment and inventory is a feature we would like to add further down the line. This would mean players would not have to rearrange these to their preferred set ups at the start of each game. This was not possible in the beta, however, as player profiles are not saved on these worlds.

Ultimate Ironmen are currently unable to play Last Man Standing unless they have no items on them. In the future, we will look to implement a system to allow them to play by temporarily storing their items to be returned at the end of each game.

'That's all for the LMS beta, We hope you're as excited as we are to try out the changes and look forward to seeing you there!

"Splashing" is a highly AFK Magic training method. By attacking NPCs while wearing equipment with low Magical accuracy, it is possible to prevent yourself from dealing any damage. This means the NPC never dies while the player gains experience for casting the spell and can remain in combat with the NPC for hours.

For new players that come fresh out of Tutorial Island, it looks odd to see players dressed in full Melee equipment attacking with Magic against low level NPCs such as rats. To avoid this, you no longer gain Magic experience for casting spells in the area shown below (this includes the castle basement) if your magic accuracy is too low to deal damage: 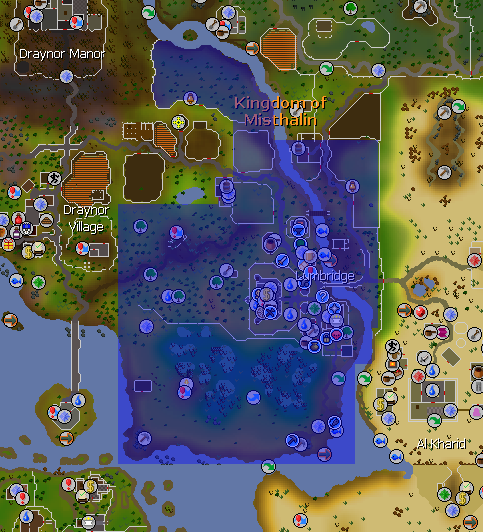 Song of the Elves Competitions

The login screen design and lore video competitions for the upcoming Song of the Elves release are still running! The winner of the login screen design competition will have their entry featured in the live game for players to see upon launch of the quest. The winner for the video competition will have their entry featured on the official Old School channels to promote the update. Both competitions also offer additional prizes of Amazon vouchers and membership.

For your chance to win, check out the all the details in the competitions section of our Song of the Elves progress blog. 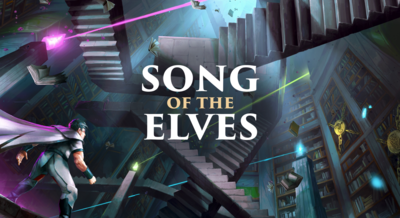 On the topic of Song of the Elves - the release date of July 25th is fast approaching! In preparation for launch, we will be taking time away from updating the game next week. The usual reboot at 11:30am (BST) can be expected next Thursday to update the engine, but we are not expecting to make content changes.

Minus a change to skill capes on PvP worlds, our small changes this week relate to feedback from the recent Forthos dungeon update.