This week we see the return of the infamous Revenant caves, alongside an expansion to the Mage Arena! Those willing to venture into the Wilderness will be able to unlock a new best in slot cape for Magic and gain access to a whole host of additional NPC's for Wilderness Slayer.

Kolodion, master of battle magic, has a new challenge for anyone brave enough to venture back into deep Wilderness.

Players with 75+ Magic who have completed the original Mage Arena and unlocked the ability to cast all God spells outside of the Mage Arena will find a new option when chatting to Kolodion. 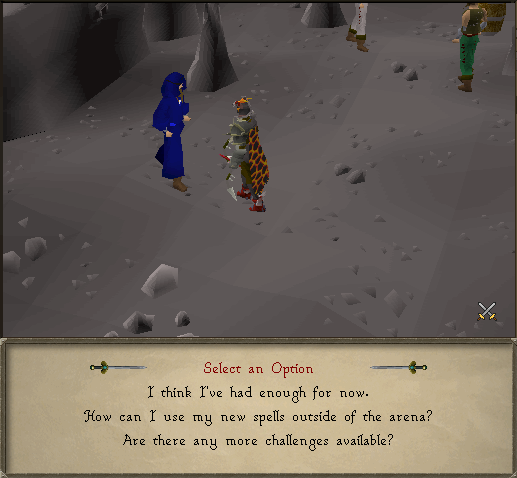 The challenge is to track down and defeat 3 demons, found in random locations within deep multi-combat Wilderness.

In order to locate them, Kolodion will hand you a Hot/Cold device which will draw you closer to the spawn location (using this device will cause damage to the player, so you must be conservative with its usage). When close enough, one of the 3 demons will spawn depending on which you were tracking at the time. Only the player who summoned the demon can attack it - even in a multiway area. If you take too long to find any of the 3 spawn locations, all 3 will be reset and assigned new spawn points! 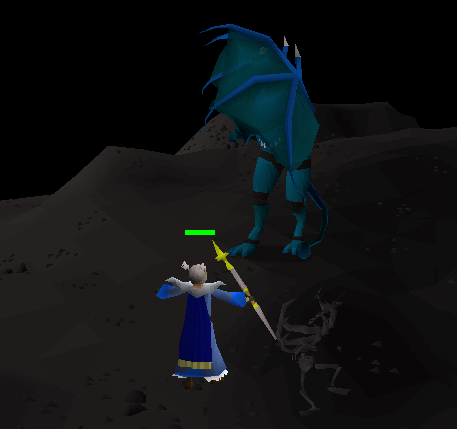 The new variant of the God capes will work just like the current ones do in their combination with the God staves and spells. When you defeat a demon, it will drop a unique heart. You must defeat all three demons and then take Kolodion one of each heart. These cannot be banked. Once Kolodion has all 3 hearts, he will upgrade one God cape for you. This will consume your old God cape and replace it with the newer upgraded version. To upgrade another variant of the God capes, you must repeat the process of tracking down and defeating at least one of the demons! 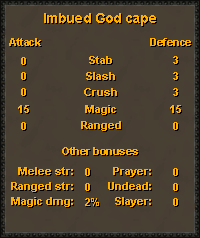 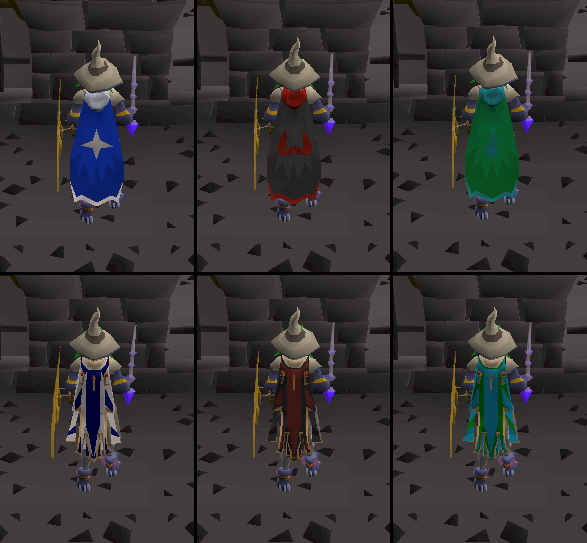 You'll want to be very careful when using the capes. If you die whilst wearing one the magic sealed within it will fade. When this happens, both the imbued and original God version of the capes will be reclaimed and lost! This will not apply to any area that is classed as a safe death however, and the cape will be recoverable from any service that offers an item reclaim function.

Known to be one of, if not the best, Wilderness related money making methods. The Revenant Caves are filled with higher-levelled Wilderness monsters and an entirely new NPC, Revenants. Alongside offering a great way to utilise Wilderness Slayer, you can expect to make an attractive amount of profit whilst training here! 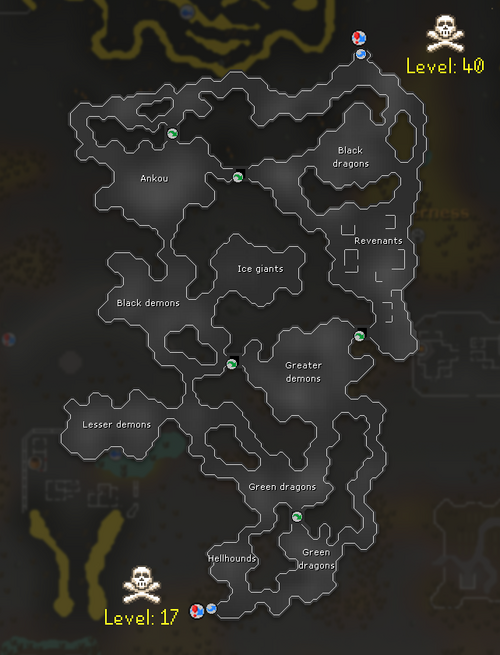 The caves are multi-way combat throughout, apart from the entrances and a small area within. You'll find many high-level shortcuts and escapes routes though, providing helpful ways for players to slip out of reach should they find themselves in a difficult situation. The lowest required Agility level for the shortcuts is 65, with the highest Agility level required 89.

All monsters within the caves are included within the Wilderness Slayer monster list, with Revenants being the newest addition. Some of these will prove quite the challenge to defeat, so ensure you enter the caves prepared! The higher level the Revenant is, the better chance it has of dropping an item.

The Bracelet of ethereum is dropped by Revenants found within the cave. Although it has no stats, you can charge the bracelet with a new tradeable consumable item; Revenant ether, which are a guaranteed drop from Revenants.

Once charged, wearing the bracelet will cause Revenants to no longer be aggressive towards you. In addition to this, you will become immune to their attacks. However, each attack will drain 1 charge from the bracelet. Once all of the charges have been consumed, the bracelet will revert to its uncharged form which loses the effect. This item will most certainly be a requirement to stay in the caves for any length of time.

The Bracelet of ethereum has an alch value of 43200gp and will always be dropped on death. It can never be protected by the default 3 items kept when unskulled, via using the prayer "Protect Item", or a combination of the two. Any ether used to charge the bracelet are also dropped on death.

Getting to and from the Revenant caves can be a time-consuming process. Luckily, all Revenant NPC's have a small chance of dropping a tradeable Revenant cave teleport scroll, which can be used to teleport to the lower wilderness-level entrance of the caves.

Ancient crystals are a new rare tradeable resource that drop from Revenants. These are used to build a player owned Wilderness Obelisk, which allows a one-way teleport to any of the 6 current Wilderness obelisk locations, chosen at random. Completion of the full Wilderness diaries allows you to choose a specific teleport location. 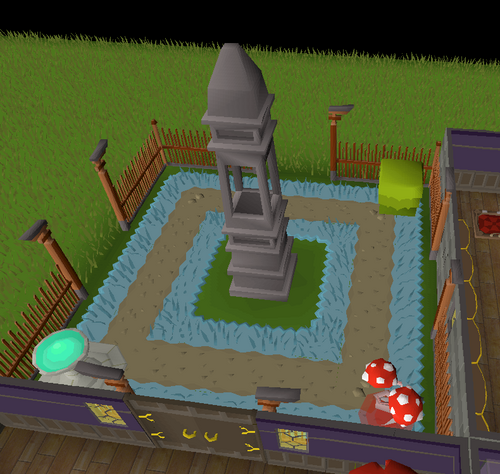 Building a player owned Wilderness obelisk requires 80 Construction, 4 Ancient crystals and 4 Marble blocks. It can be placed in the Superior Garden room, using the same hotspot as the Spirit tree/Fairy ring. Completing the obelisk grants you 3000 Construction XP.

Deadman Beta
The Deadman beta playthrough will take place today at 2pm GMT (9am EST) on World 407. You will be given a 15 minutes to log in and prepare, with the action kicking off at 2:15pm GMT (9:15am EST). The event is expected to last around 90 minutes but will run through to its completion. More information can be found in the Beta playthrough newspost.

Christmas Event
As December draws ever closer, we're busy working away on our next special event in preparation for Christmas. Designed by Mod Ash, developed by Mod Maz and with art from Mod Ghost, you can expect 2017's Old School Christmas event to arrive somewhere around mid-December! For now though, to all our members from across the pond, Happy Thanksgiving!

Old School Mobile
We know you're all eager to hear more about mobile! We recently released further information regarding our progress. You can read the full post here.

King of the Skill
King of the Skill is drawing to a close. There is just over a week left for you to get your highest skill levels, with the worlds being taken offline at midday UTC on the 30th of November. The competition has been hot in this brand new game mode, with as little as 3 total levels between 1st and 2nd place. Will anyone take over the number 1 spot from B0aty? Some of the prizes on offer include a limited edition Old School gaming PC from Chillblast and an ICON Series gaming chair from noblechairs. More information regarding King of the Skill can be found here.

We want to ensure this competition is as fair as possible. If you have any concerns, or information regarding the integrity of the game mode, please send as much detail as possible in an email to [email protected] with the subject header "KOTS Tip-off".

Dragon Slayer II
Great progress has been made on Dragon Slayer II, with a player visit to test some of the boss mechanics taking place from the 28th to the 30th of November here at our offices. If you haven't already, make sure you meet the below requirements ready for the full release on the 4th January![sic] We also published an update post last week, which can be found here. 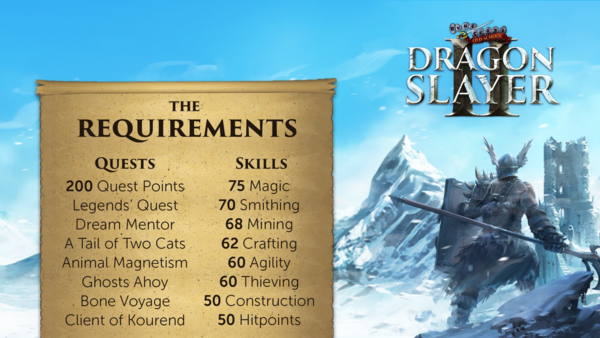