The Mining Guild expansion has landed. The expansion brings with it a new high-level mineral to mine and new gloves to aid your mining efforts.

The Mining Guild, below the city of Falador, has increased in size and utility. Free-to-play players will see some improvements, whilst an exclusive members-only area has been added to the guild. Level 60 Mining is still required to enter the guild.

The free-to-play area now contains 2 Adamantite and 4 Iron rocks in addition to the existing 5 Mithril and 37 Coal. Two new shops have been added: one contains pickaxes and another for ores. The ore shop has no stock by default.

The members-only area is a new addition which contains a bank, a deposit box, a poll booth, and the following rocks to mine:

The members-only area also has two other passive benefits. All rocks in the guild have a halved respawn timer when compared to the same rocks found elsewhere in the game. In addition to this, there is an invisible +7 boost to your Mining level. This will improve your chances at mining ores, but will not allow you to access rocks which require a higher level than you have. This boost stacks with other boosts to your Mining level. 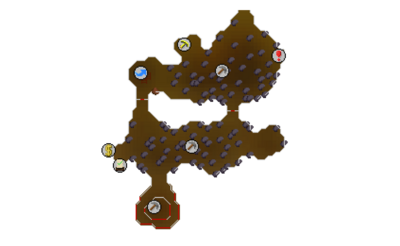 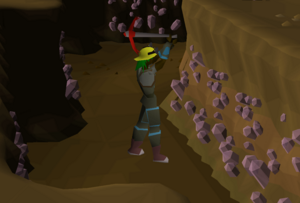 The expansion brings with it a new mineral to mine. Amethyst was polled as a new high-level mineral to mine with its use found in creating ranged ammunition.

The crystals can be used to create Ranged ammunition by utilising the Crafting and Fletching skills. Details of the ammunition (as well as the level requirements to make them) are listed below:

All Amethyst items are tradeable. Both the arrows and javelins can be poisoned (and it is possible to create Amethyst fire arrows, should you so desire).

Mining gloves can be found in two variants: standard and superior. These gloves can be purchased using Unidentified Minerals. Mining any rock within the new area of the guild offers a chance at obtaining these minerals. The effects of the gloves are as detailed below: