This week we've beefed up monster examine to provide you with a lot more information on the monsters you are most interested in. We've also got an update to attack priority options allowing you to set different options for NPCs and players, as well as a bunch of changes for Deadman mode!

Ever wondered what Defence level TzTok-Jad is? Or perhaps the attack level of an imp? Wonder no more! Monster examine has been improved and will now provide you with much more information about the monsters you choose to examine.

Please note that the information provided in monster examine does not take special attacks or changing forms into account.

So, what are you waiting for? Go ahead and scout out the foes you find most intriguing with monster examine and uncover some of the details of what they have going on under the hood!

The attack priority options which allowed you to choose when and where you would like the attack option to appear on NPCs and players has now been updated to give you more control. 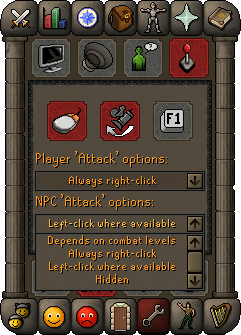 When skulled in Deadman mode you will now see a timer appear on your screen letting you know roughly how long you have to go until your skull expires. The timer updates every 30 seconds.

We have made a number of changes to how bank keys work in Deadman mode:

Keys on the floor which belong to a player who dies are destroyed.

It is now possible to attack players in this sort of combat. If you are looking for a kill and you see someone in one of these sorts of situations, make sure to try attacking them! You may well be able to hop in and grab yourself a loot.