The necromancy spellbook is receiving a bit of love this week, including the addition of 11 teleports and the brand new resurrect crops spell! 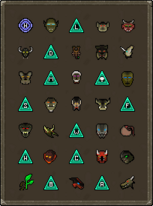 Resurrect crops is a new level 78 spell on the necromancy spellbook which gives you one 50 - 75% chance to bring a farming patch which has died back to life. The chance of the spell succeeding is dependent on your Magic level, starting with a 50% chance at 78 Magic and scaling up to a 75% chance at 99 Magic.

Please note: If you had dead herbs in a patch before the release of today's update the resurrect crops spell will not be able to resurrect your herbs. When you cast the spell it will simply clear the patch. Once the patch has been cleared and new herbs planted it will then function as expected.

The necromancy spellbook now includes 11 new teleports to locations found all around the game. The following teleports have been added:

Teleport scrolls have been given a new, unique teleport animation to make them stand out a little more.

It is now possible to choose whether or not boss killcount messages are filtered out by the game message filter. You can toggle this by right-clicking the game filter button at the bottom left of your chatbox and selecting 'configure'.

Head to your nearest poll booth in game to vote. Have your say!