The Month Ahead for October is here! We've got lots to come this month including the max cape, skilling pets, Deadman mode and lots of content from poll #36!

Head over to the forums to give October - The Month Ahead a read!

October - The Month Ahead

October is here and we have a huge amount in store. We've got a lot of content still to come from content poll #36 including skilling pets, a new Lunar spell to help you check your farming patches and lots, lots more. We've also got the addition of the max cape and Deadman mode to Old School!

Bringing the max cape to Old School is something that has been a longstanding request from many players and as Old School now has over 139 maxed players, a number which grows every day, we feel that it is about time we had one.

The max cape will be available to players with level 99 in all skills (2277 total level). The cape will have the same stats as a trimmed skill cape and would cost 2,277,000 coins to purchase.

The model for the max cape is a modified version of that found in RuneScape 3. The emote that will be attached to the cape, however, will be unique to Old School.

So, for those of you that are nearing on maxing, now is the time to finish off those last few levels! We are aiming to have the max cape in game for next Thursday.

Deadman Mode is designed to be a high risk and high reward gaming mode where your survival is based on how honourable you are in an environment which encourages dishonour. The game mode will be coming to Old School later on in October.

A lot of information has already been provided about Deadman mode - most of what you will need to know is already out there. The intense excitement and fearful gameplay that will come along with Deadman mode will be created with just a few small changes:

Other than the above, there are very few differences between Old School RuneScape and Deadman mode. You will be able to hop in game and know exactly what you are doing.

Don't get too comfortable, though. Around every corner there will be someone ready to take your life and set you back!

Since being added to the game last July, the mega-rare pets dropped by bosses throughout Old School have proven to be very popular. Having the incredibly slim chance of receiving an awesome-looking pet has given many avid boss slayers out there a new challenge to take on.

Later on this month we will be giving skillers the opportunity to get their hands on some pets, too. In content poll #36 we will be offered to introduce 4 skilling pets to Old School:

In the same way that boss pets are very, very difficult to acquire, skilling pets would be incredibly rare. It will not be quicker to get the pet by doing faster, lower level activities as the likelihood of receiving the pet will be based on how long it takes to perform each action.

We are aiming to make receiving a skilling pet take roughly the same amount of time required to get a boss pet. They will be no easy task to acquire and if you see one you can be certain that the owner has a huge amount of skilling under their belt!

Later this month we will be seeing the 2015 Halloween event in Old School! This year we have created a brand new event to go along with some brand new rewards!

After failing to convince Gielinorians everywhere to abandon their Wintumber revelry for the sobering malaise of everyday life; Anti Santa sought out his old buddy the Grim Reaper, for a much needed dose of cynicism.

Grim was more than happy to trade a few discordant tales with the contrarian humbug at first, but the problem with these contentious, nihilistic types is; they never know when to leave! 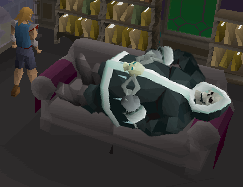 It’s been ten months now since Anti-Santa parked his frosty backside on the Reaper’s couch and he has just about had enough. Your task is to get Anti-Santa out of Death's mansion and out into the cold where he belongs.

As always, you will also be able to get your hands on all of the rewards from previous years if you haven't already. This includes:

The Halloween event will be making its way into game a week or so before Halloween.

We've still got a fair amount of content to be released from content poll #36 and you will be seeing a lot of this throughout October.

One lovely quality of life change that we polled was a toggle to keep private messages visible even when the chatbox is hidden. This would allow you to chat away with your friends without needing the entire chatbox to be visible.

Another change to come which avid impling hunters are sure to love is the impling log. You will be able to track the number of implings that you hunt all over Gielinor.

If you're interested in seeing everything that is coming from poll #36, you can see a full list of the updates in the poll module.