In preparation for the full release of Old School Mobile, later this afternoon we'll be allowing all Canadian users access to the Android app! Edit: This is now live as of 13:10 BST!

The soft launch of mobile in Canada allows both members and free to play users access to the app, whilst giving us the chance to experience a country limited launch to both sets of players in a more controlled manner as we optimise the player experience in advance of global launch later this year. We've also unlocked the ability for those users to purchase bonds and membership via the app, rather than having to go through the website.

For all other regions, not much has changed. You'll still be able to access Old School Mobile as you can now on Android with an active membership!

These are really exciting times for us all as it indicates just how close we are to a full release on mobile. Once we've soft launched in Canada we plan to allow access to mobile in more regions in the very near future. This is the first time we've allowed players access to mobile outside of the Beta, and whilst we're confident that everything will run smoothly, there is the possibility for something unexpected to occur. As such, we're unable to give any dates on future soft launches, but rest assured we will share our progress with you as we're able to.

In preparation of the release of the soft launch, we've implemented some new changes for mobile users! Note: If you're experiencing issues loading the Old School Mobile app, please ensure you have manually updated it via the app store!

One of the larger changes is one we mentioned earlier in the blog - the ability to purchase bonds and membership via the app, rather than through the website.

In order to remain compliant with the rules of app store and implement purchase for subscription and bonds we've had to make sure our billing systems were updated to include the new methods of payment that will be used, rather than the traditional website billing we're used to. This means we've had to make some changes that will apply to mobile users only.

A toggleable orb has been added to the advanced settings menu when on a mobile device, that when tapped, will open the store to and display payment options for bonds and membership. This orb will always show for F2P players. For members, the orb is disabled by default and will need to be toggled on via the advanced settings menu. This will NOT appear for desktop users.

We'll be monitoring the usability of the orb over the next few weeks. One of the ideas we had was replacing the orb entirely with a new "Account Management" interface. In order for us to do this, we'd look at combining the "Friends" and "Ignore" buttons into one single interface, and using the space this would free up to implement the new Account Management interface.

From the Account Management interface you'll be able to see very specific details such as; how many days of membership you have remaining, an indication of any messages you may have in your Message Centre, a link to the Old School Support page, a link to the Old School news page for new blog posts, and the ability to purchase bonds and membership. Your feedback on this is very much welcomed, including what else could be included in this page.

Bug reports can now be submitted when playing on mobile.

The keyboard is now closed on mobile when attempting to open the world map.

The letters K, M & B have now been added as buttons to the window when depositing or withdrawing "X" amount of items on a mobile device. These buttons will function the same as when entering K, M or B after an amount on the desktop to represent thousand, million and billion. 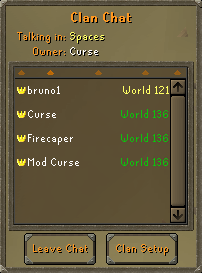 An additional option has been added when tapping a player's name on a mobile device to display their previous name. This will then appear in red for a few seconds before changing back to their current name. 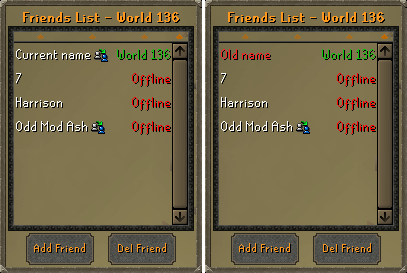 A second batch of interface overlays have been updated so that they'll no longer overlap with the chatbox on mobile. We'll be continuing to work through these in the coming weeks.

The graphics on the Viggora's chainmace have been updated to make it look and behave more like a chainmace.