This week will bring an interesting addition to player owned houses: menageries! And, as usual, we will be bringing you a bunch of other changes along with it.

In last week's update post we showed you some behind the scenes screenshots of player owned house menageries and now they are here. If you are level 37 construction you can now add a menagerie to your house and let your pets roam free. 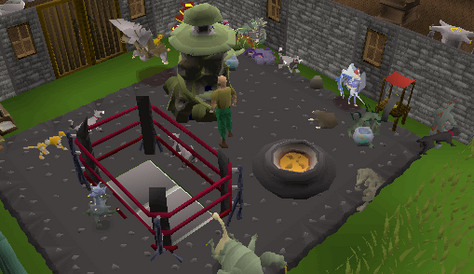 If you are one of the many players that have not yet received a boss pet then don't worry, your other pets can take advantage of a menagerie too. If you are sick of seeing your cat sleeping away in your bank, perhaps it is time for you to relocate them to your menagerie.

You can decorate the room with a bunch of new and interesting elements. If you fancy setting your pets up in varied environments you can choose from 5 different habitats for an outdoor menagerie. Maybe your tiny Zilyana is spending a little too much time scratching at your throne, a scratching post might solve that issue.

There are a bunch of ways for you to customise your menagerie so grab your planks and head to your nearest house portal. 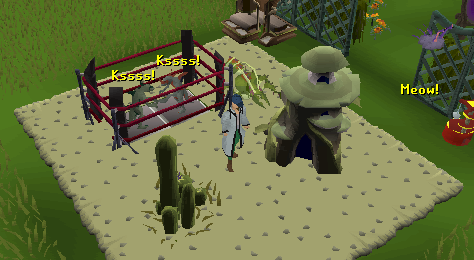 In addition to the release of menageries, Mod Ash has worked his magic and significantly reduced the load times of large player owned houses. A large POH used to take up to 20 seconds to load, that time has now been reduced to around 5 seconds.

It is now possible to get multiple ectophials, magic secateurs and, if you have enough points, Barbarian Assault reward armours without running into any restrictions.

Many players requested that we allow you to get multiple of these items and we saw no reason to disagree, so now you will be able to set yourself up with placeholders in your bank and backups for worst-case scenarios.

A couple of weeks ago Old School experienced some network issues due to an ongoing attack and, to help prevent Old School players from losing hard earned items to something that is out of their control, we implemented some changes to the death mechanic.

These changes have now been reverted as the network issues have subsided. The death mechanics are now back to normal, leaving you with 2 minutes to retrieve your lost equipment instead of 30 minutes and your items will once more be instantly visible to everyone.

Don't miss our Q&A livestream from 5pm on Twitch! Last week you watched Mods Alfred and Wolf take on the ghost chilli challenge, this week Mod Alfred will be eating a scorpion!

All of this madness is, of course, for a good cause. Mod Alfred is taking part in the Color Run and is raising money for Save the Children. Make sure to head over to Mod Alfred's page to check out what is going on and, if you can, donate to Save the Children.