Content Poll 10 is now open for voting. As we promised in the last dev blog, you'll get to choose from a long list of new rewards for Nightmare Zone, as well as voting on God Wars Dungeon rewards. 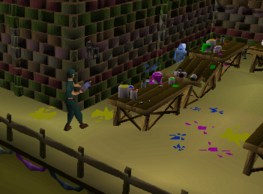 Finally, for Halloween, we're offering to re-open the holiday event from 2006. That's the one where you had to exorcise Diango's workshop with paint guns. As an extra reward, we'll offering to create an untradeable new Halloween mask, coloured black.

We've made a few changes to the poll questions, in response to the feedback you've posted since the blog was published. In particular:

It's not been possible to adopt everyone's suggestions, of course, but please keep posting your views - we'd be very happy to use your ideas in future polls.

You can log in and vote now, and discuss the poll on the forums. We'll close the poll on Wednesday 25th September.

Following yesterday's game engine update, players have found that they stop walking momentarily when they drink a potion. We've got a fix for that in testing now. If it works out, we'll aim to launch it later this week, along with the bugfix for repairing Barrows kit in a player-owned house.

Work on the God Wars Dungeon is coming on nicely. We've been reviewing the old monster AI, dealing with problems like an Aviensie trying to perform ranged attacks with a Ranged level of 0, or a Bandos creature completely failing to retaliate altogether. There's still a long way to go, but we're well on track for an October launch.