Old School RuneScape’s 71st Game Improvement poll is here! This time, the focus is on PvM. Have a read through the questions, and give us your feedback!

It’s time for another game improvement blog! This time we're here with the proposed questions we'll be putting forward for our 71st Game Improvement poll. We plan to poll these questions pending your feedback. 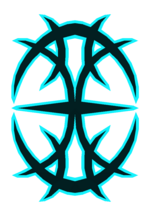 In Poll #70 we made some small changes to The Gauntlet, but we feel that the minigame could be improved even further.

We’d like to remove some of the frustration of finding resources in the early game by reducing the amount of randomisation in the first few rooms and spawning demi bosses in set locations. Please note that only poll question 1 will apply to only the regular gauntlet, all others will apply to both modes.

Proposed image of where the demi bosses can spawn. They will only spawn in 6 of the 12 highlighted areas.

We’d also like to offer a bit of rebalancing for the Crystal Staff, which we think could use a small buff.

There’s also the matter of armour crafting. Currently, a Tier 1 piece of armour requires one of each resource. There are three pieces in the set, so you need nine resources in total just to craft the most basic armour. To upgrade that armour to Tier 2, you need a further 18 resources, and for Tier 3 you need another 27. That means that a fully upgraded set of Gauntlet armour will cost 54 resources in total, which adds up to a lot of time spent doing busywork when you could be challenging the Hunllef.

This reduces the cost to just 39 total resources.

Current Gauntlet Resource Table. Click the image to expand it.

Proposed Gauntlet Resource Table. Click the image to expand it.

Next up, we’d like to offer two more convenient ways to use vials and potions in The Gauntlet. Firstly, we’d like to enable the barbarian smashing technique, which will automatically destroy vials after the potion in them has been drunk. To get this to work in The Gauntlet you’d still need to learn the ability from Alfred Grimhand’s Bar Crawl and enable the setting by talking to the guard outside the Barbarian Agility Course.

Secondly, we’re aware that you can achieve one-tick vial filling and food cooking while in The Gauntlet by spam-clicking. Since it’s easily achievable anyway, we’d like to save some wrists and make that speed the default. Please be aware that this would only apply within The Gauntlet.

Proposed animation changes for the Hunllef. Left is the magic animation, right is the ranged.

We've removed a question in this section which pertained to making granite dust tradeable. As you know, we don’t like to make sudden changes without consulting our players, but in this instance, we realised that the impact tradable granite dust could have on the Slayer skill might be too large.

We believe that the better option is to wait and see how the changes to the Grotesque Guardians boss fight play out. We already know that if the wait times during the fight are reduced, we’ll see an uptick in the amount of granite dust in the game simply because more people are playing and enjoying the fight. If it’s made tradable, we may find that too much granite dust is entering the game, being used to craft granite cannonballs, and making Slayer tasks much faster than we'd like.

We’d very much like to buff the Guardians, but not to the point where we’d be significantly altering one of the most popular activities in the game.

In the meantime, we’d like to hear your feedback! You can let us know what you think about Grotesque Guardians, granite dust, and Slayer on Reddit, Twitter, Discord, or the Official Forums.

We'd like to propose the following improvements, focussing on the combat encounter itself:

We’d like to revisit the Vanguard Room from Chambers of Xeric, which we understand is a particular pain point for some players.

For one thing, the melee vanguard is hard to hit with Magic, which doesn’t match up with the established combat triangle. 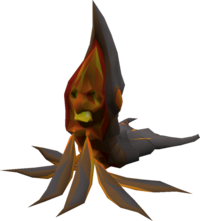 Secondly, the vanguards’ fight reset mechanic, where their hitpoints must stay within 33% of the other vanguards’ health at all times, can be frustrating for small parties. This is largely because 33% of a vanguard’s total health is actually within the range of a max hit for a solo player – which means that one lucky (or rather, unlucky) hit could force them to restart the room. Alternatively, they can waste inventory slots and time trying to fight the bosses with lower-tier gear.

We think this problem can be resolved by simply giving the vanguards more hitpoints and making them easier to hit, so that a max hit is once again the lucky break it should be. We do not anticipate that this would make the room any less challenging – just less annoying.

Another issue with the 33% limit is that it’s not actually displayed anywhere during the fight, which can add an unwanted element of randomness. Here’s how we plan to address that: 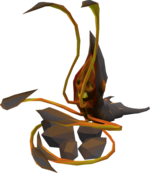 There are other ways in which we can make the Vanguard Room less of a hassle for smaller groups, including upping the reset mechanic boundaries to 40% of each vanguard’s total health and reducing the vanguards’ aggro range for better targeting.

Last but not least, we’d like to guarantee that at least one of the vanguards will drop an Overload potion when slain. The remaining vanguards will still have a 1/3 chance to drop the potion.

Alright, enough about vanguards for now. Let’s move on to some other changes we’d like to make to the Chambers of Xeric.

Assuming question #19 passes, the way we implement it will be the most popular (highest yes vote percentage) of the following two options:

There’s another quality of life improvement coming up next. Currently, potion drops appear under raid supplies and bones in the Chambers of Xeric, which can make them easy to miss. We’d like to change that. 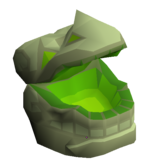 Next up: currently, there are three storage units available in the Chambers of Xeric. We’d like to add a fourth, available to build at 99 Construction, which will hold even more supplies. 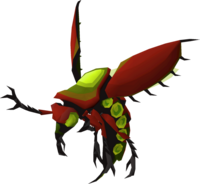 Next up, we’d like to offer a few cosmetic changes: 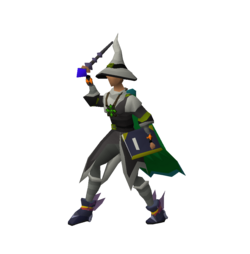 We'd like to add the Twisted Ornamanet Kit, offered in the Twisted League Reward blog as a potential drop from Chambes of Xeric (Challenge Mode). Similar to the Infinity Robes ornament kits, the Twisted Ornament Kit can be attached to any piece of the ancestral robes set and will make that robe piece untradeable. It will be an additional drop on the loot table, similar to how dust is obtained.

We'd like to give you all a chance to vote on how you'd like to see the Twisted Ornament kit in game. If question 26 passes but 27 does not, the item will enter the game untradeable.

Last, but by no means least, we’d like to add a new ‘best time’ feature to the Chambers of Xeric.

Isn’t it a bit weird that Lumbridge has a furnace but no anvil? To get started with Smithing, new players have to walk all the way up to Varrock, dodging the aggressive wizards on the way, to find an anvil. We propose the addition of a beginner’s anvil, which can only smith bronze items, to the forge in Lumbridge. This will allow new players to properly equip themselves before exploring the wider world. 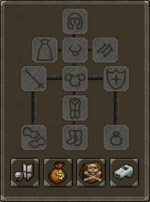 Currently, there’s not enough space on the Equipment window to display set effects, such as those offered by the Inquisitor armour or Graceful. To work around this without disrupting the classic interface, we’d like to add a panel that is hidden unless opened. This panel will display the equipment’s stats and list any active set effects. You can equip or unequip items while this panel is open, and it’ll update accordingly. 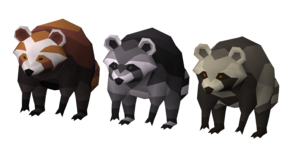 If this question passes, you’ll be able to feed Rocky berries to change its species. Redberries will transform it into a red panda, poison ivy berries will turn it into a tanuki, and white berries will return it to its original state.

Our next proposal is a quality of life change that will make it easier to see at a glance which herb you have planted.

This next question is one for all the fashionscapers out there! At the end of Rag and Bone Man II, you’re given the option to choose between two rewards: the Bonesack (an almost completely cosmetic item) and the Ram Skull Helm, which requires 30 Defence to wear and provides stats equal to an adamant full helm. We think it’s unfair to expect players to choose between the two items and would like to offer the opportunity to have both for the first time.

There’s another player suggestion up next, this time from reddit user /u/rururupert.

We’d like to offer new ways to obtain soft clay packs and bags full of gems. At the moment, these items are only available from Prospector Percy’s Nugget Shop in the Motherlode Mine. We’d like to make them available in the Mining Guild Mineral Exchange for a comparable price.

Finally, we’d like to offer a quality of life update for the Player-Owned House. Currently, to upgrade a chest, wardrobe, or rack in the costume room it must first be emptied of clothes, which is a time-consuming process. We’d like to make these items upgradeable in a similar manner to the tool storage in the workshop.

Unfortunately, due to the way we’ve set this up, if you don’t already have the highest tier of furniture in your costume room you would have to build the lowest level first and work your way up.

Since Krystilia's Slayer Task list expansion, there have been some concerns that the population of black knights and bloodvelds are too low for Wilderness Slayer.