We haven’t let all the excitement of the Darkmeyer release stop us from working on the improvements you voted for in Poll #71. This week’s update includes the last of the Chambers of Xeric updates, new Wilderness spawns, and a little something-something for all the fashionscapers out there. Let’s take a look.

The only thing Rocky the Thieving skill pet is stealing this week is our hearts, as he gains the ability to transform into two new (but still totally adorable) species!

A toggleable healthbar interface has been added to the following Chambers of Xeric bosses: Tekton, Vespula's Abyssal Portal, Muttadiles, Vanguards, Vasa Nistirio, and The Great Olm. In the Vanguards’ case, the HUD will show each of their healthbars individually.

In related news, shortly after the update we will reset the solo challenge mode Chambers of Xeric world record that was obtained illegitimately.

Fashionscapers rejoice! You can now own both the Ram Skull and Bonesack rewards from the ‘Rag and Bone Man II’ quest at the same time.

To reclaim your reward, speak to the Odd Old Man at his camp near the road to Morytania. If you haven’t yet completed his quests, you can pick those up in the same place.

Bear in mind that you’ll need level 30 Defence to equip the Ram Skull, which provides the same stats as an adamant full helm.

The Mining Guild has finally woken up to the changing times and has started to offer bags of gems and soft clay packs in their Mineral Exchange Shop. Both work exactly the same as the ones from Prospector Percy’s Nugget Shop.

The soft clay packs can be purchased for 10 unidentified minerals.

The bags of gems can be purchased for 20 unidentified minerals. Who knows, perhaps you’ll be as lucky as enneUni, who received the first ever uncut onyx from a bag of gems just this week!

That’s all from Poll #71 this time – but rest assured, you’ll be seeing plenty more of it in the coming weeks. 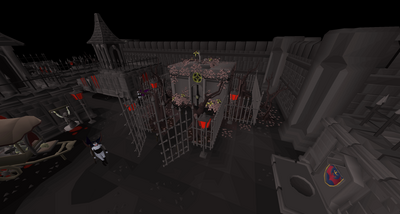 We've been keeping a close eye on Darkmeyer since release, tweaking and changing the content in response to your feedback. This week, the following changes will go live: 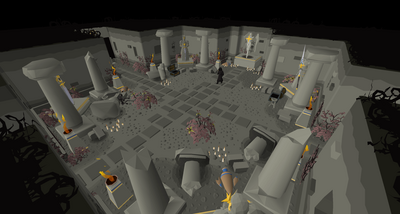 In the weeks since release, we've seen two contrasting opinions about the Hallowed Sepulchre's XP rates. Some of you believe it doesn't reward enough XP; some of you think it rewards too much.

The truth is that both groups of players are using very different playstyles, and seeing discrepancies in their XP rates as a result. If you play through the Sepulchre while taking time to get treasure on every floor, you'll see less XP - but this is balanced by the amount of loot you'll receive. Conversely, if you ignore the treasure completely and focus on completing the floors, it's possible to boost the XP rate exponentially.

Ideally, we want everyone's experience of the Sepulchre to feel rewarding, but balanced. This week, we've added a small amount of Agility XP to the treasure encounters, in an attempt to shift a balance a little bit. We do however realise that this won't completely address your concerns, and in the coming weeks we'll continue to work on rebalancing.

The real question is: what kind of skill level do we balance for? Right now, our goal is to balance the content so that the amount of XP received is just right for an 'above average' player. This hypothetical tomb raider makes a few mistakes, but never runs out of time, and only collects treasure on the most valuable floors. They get a balanced amount of both XP and treasure.

With this assumption in place, a truly skilled player, who's put both time and effort into mastering the Sepulchre, will get better XP rates. We're happy with that, because we believe that taking the time to master a skill should be rewarded.

But where does that leave the vast majority of players, who will play through the Hallowed Sepulchre according to their own playstyle? As you've seen, balancing the minigame for two entirely different playstyles is a difficult task.

Our priority this week has been fixing any bugs we've seen crop up in the Darkmeyer content, but rest assured that we will shift focus to the Hallowed Sepulchre's XP rates as soon as we're able. When we do, we'll include the assumed time benchmarks for the imaginary 'above average' player that we're using as a point of reference.

National Video Games Day is coming soon, and at Jagex, we're all gamers. So to celebrate, we're asking you to tell us about your favourite elements of your favourite games! Click on the link below to fill out a short survey, and help us to create the ultimate supergame!

The past few days have seen an uptick in the number of fraudulent password reset emails being sent to Old School players. We are currently still investigating the cause of this issue. In the meantime our Player Support team have prepared advice for those affected.