PvP Worlds are here at last! On worlds 325 and 337, players can now fight each other almost everywhere across the whole game world. We recommend you read this newspost before visiting those worlds so that you know what to expect. 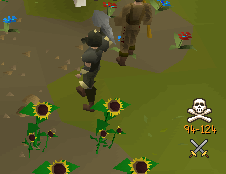 On the two PvP worlds, you'll see a little skull icon on the right-hand side of your game window. This shows that you're in a PvP zone.

Across most of the game world, you're allowed to fight players whose combat level is within 15 of your own. Your head-up display shows the range of combat levels of players who may attack you.

On logging into a PvP world, you'll find that the usual Welcome screen pop-up has been disabled, and a little warning message appears in your chatbox instead. 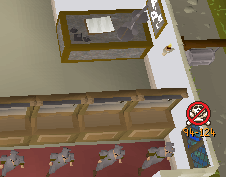 Banks, the four respawn points and anti-macro event areas are designated as safe areas, where combat is forbidden. When you're in a safe area, the skull icon is crossed out.

Remember, while players can't attack you inside a safe area, queued damage and poison can still kill you after you've crossed the threshold.

Attacking another player on a PvP World will get you a PK skull, just like in the Wilderness. On death, you'll keep the usual 3 items unless you are 'skulled'. The Protect Item prayer lets you keep an extra item; in a future poll we may offer to create High Risk worlds where that prayer is disabled.

The Teleblock spell is enabled on PvP Worlds so that you can stop your prey from teleporting off. Remember, teleporting on a PvP world will not give players any immunity from attacks; you may come under attack immediately after teleporting unless you've landed in a safe area. 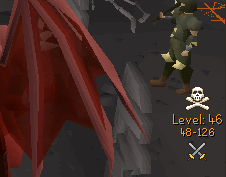 Within the Wilderness, you can attack a wider range of players. The normal limit of 15 combat levels is increased by the Wilderness level where you are standing. The head-up display is updated to show this.

A variety of minigames have been disabled on PvP worlds, including:

For the moment, PvP Worlds have been released purely for the fun of fighting all over the world, and claiming the loot dropped by your victims.

However, in future, we hope to run polls about reward features that could be made available to encourage more players to use these worlds. We'd really appreciate your opinions about what sort of rewards you'd like us to offer, and will be keeping an eye on these forums to gather your ideas.

We'll also be keen to poll other adjustments to these PvP worlds. While Poll 11 didn't find adequate support for granting immunity after teleporting, or for disabling the 'Protect Item' prayer, we'd be very happy to poll alternative changes to tweak our PvP worlds towards whatever form you'd most enjoy.

Over the last few months we have seen a tremendous amount of really cool content enter Old School such as God Wars, Nightmare Zone and Halloween. A lot of you have approached us saying you have friends that want to try this new content but don't want to become a member first. We can't think of any better way to celebrate all this new content than to help you share it with your friends.

From this update until 23:59 GMT on Monday 4th November we will give free access to Old School for everyone who wants to try it! Any Jagex account will be able to try Old School this weekend and will get access to all the normal membership features.

The combat interface once again highlights the autocast buttons in red when you've enabled autocasting of a spell.

In celebration of Halloween, the flame graphics on the login screen have been updated to something more seasonal, and the login music has been changed to Scape Scared.

If you haven't already played the Halloween event, head on over to Diango today to solve his little problem and claim your Halloween items, including the new black Halloween mask. We'll leave the event in game until next Thursday 7th November.

Last week's temporary death-dropping changes are still in effect. Our systems administrators and ISP have already made numerous changes to improve the network issues that have been plaguing OSRS, but it's still not yet satisfactory. We will be removing the death-drop changes once the system seems more stable.

Please come over to the forums to discuss the update and suggest the rewards you might like to see on PvP Worlds in future.