After 3 weeks of QoL dedicated to PvM, Skilling and PvP, it's time to wrap things up with your most popular suggestions for Minigames/Other. This may be our final week of QoL month but it doesn't end here. Many of your fantastic suggestions have been added to our suggestions list, with the aim to have them coming to a poll booth near you in the future.

The team are hard at work developing and testing the content that passed from the most recent PvP poll blog. It won't all come this week, but we have plenty ready to release on Thursday!

The schedule for Minigames/Other Week is as follows:

In our most recent Skilling poll blog, we polled two questions relating to the Blast Furnace interface.

Poll Question #2 passed with flying colours, and although Poll Question #3 failed, it's not the reason for this section. Whilst we were looking to make the changes necessary to allow the bar icons to be clickable, it suddenly dawned on us. Why not just implement the same interface that was introduced as part of the Make-All update?

We'd like to poll a new question in this week's in-game poll, that will, if it passes, supersede Poll Questions #2 and #3 highlighted above. If it fails, we'll revert to what was initially polled.

Poll Question #1
Should the Blast Furnace Bar Stock interface be replaced with the new chatbox menu introduced with the Make-All improvements? If this passes, it will replace the recently polled Blast Furnace interface changes from the QoL - Skilling Suggestions 2018 poll.

Poll Question #2
Should it be possible to claim more than one Royal seed pod from King Narnode Shareen after completing Monkey Madness II?
Poll Question #3
Should the Karamja gloves 4 be changed so that the teleport locations to Duradel and the Gem mine show when right clicking them in your inventory?
Poll Question #4
Should a "Remove all" option be added to baskets and sacks of fruit/vegetables, such as the basket of Strawberries and sack of Cabbages?
Poll Question #5
Should we increase the current limit applied to the camera zoom out distance? There would still be an upper limit and the current render distance would remain unchanged.
Poll Question #6
Should the various Enchant Jewellery tabs be changed so that their left click is "Use" instead of "Break"?
Poll Question #7
Should it be possible for Tool leprechauns to accept all types of compost in noted form?
Poll Question #8
Should we update the Achievement Diary interface so it is easier to track your progress? There will be progress bars that scale from dark orange to yellow based on your completion of each task, turning green when the task reward has been collected. 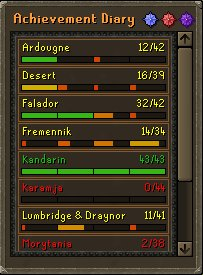 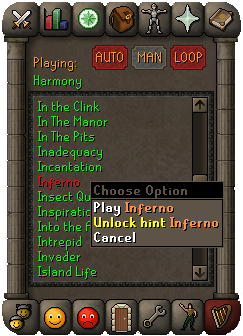 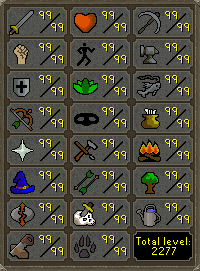 Poll Question #19
Should an additional game tick delay be added when closing a door in Castle Wars? Currently doors can be closed on the same game tick they are clicked. There would be no change to how doors are opened.
Poll Question #20
Should the Spinning wheel interface be replaced with the new chatbox menu introduced with the Make-All improvements?