This week sees the release of some QoL changes from the Re-run and Miscellaneous weeks of QoL month, some new additions to W45 Deadman Mode and the removal of this year's Birthday Event.
QoL Changes

The changes listed in this post wrap up everything that was polled in the Re-run week and includes some of the changes from the final QoL month: Miscellaneous.

Clicking on the Special attack data orb will now activate your special attack if you are wielding a weapon which has one. This change only applies to non PvP areas. A PvP area is defined as follows: 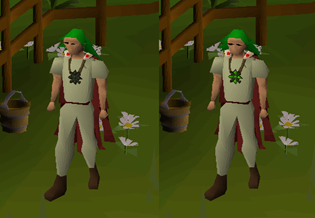 Xeric's amulet both charged and uncharged have now been graphically updated. This update also affects the mounted version of the talisman in any player's POH.

Players may now pay a one-off fee to enter the Brimhaven dungeon from Saniboch for 1,000,000 coins.

Left clicking on the Brimhaven dungeon entrance now automatically attempts to pay Saniboch for entry. If you have the coins with you to buy permanent access, you will also be offered this.

Players may now continue to gain Dark Totem pieces in order even if they have not combined their existing pieces. If you already have an incomplete set of dark totem pieces, the game will attempt to select a piece that will complete the set. This means that the chance of completing your set has not been made harder by this update.

The Grand Exchange history list now extends to 40 previous listings instead of 20.

Permanent Deadman World 345 now has a Grand Exchange! Please note that this world will become inaccessible right after the update to enable devs to do live testing on the Grand Exchange. It should come back online for you shortly after testing with the Grand Exchange and other changes that you can find listed below:

NPCs above 100 combat now have a chance of dropping tier 5 emblems.
The drop rate of Tier 1 emblems on wilderness slayer tasks has been greatly improved. This now matches that of Seasonal/Tournament worlds.

The broken item system has been brought into Permanent Deadman. As on PvP worlds, throughout most of the game world, items with a ‘broken’ version will now be broken on death, with the PKer receiving coins based on the repair price. Speak to Perdu to repair your broken kit. Please note, in deeper Wilderness areas, above level 20, the standard behaviour still applies whereby untradeable items are turned into a small quantity of coins for the PKer.

On a Permanent Deadman world, players may put things into the looting bag anywhere outside "guarded" zones. This now matches the functionality in Seasonal/Tournament worlds.

The Temple Trekking / Burgh de Rott Ramble mini-game is now available, this gives players access to the rewards as well as the Lumberjack outfit.
The clue that requires the lumberjack outfit has not been re-enabled.

Although training in instanced areas does not normally give XP on Deadman worlds, some Slayer XP for killing the Grotesque Guardians and Alchemical Hydra will now be awarded as those creatures die.

The seed box is now able to be purchased from Farmer Gricoller.
When killed via PvP, the seed box will attempt to move its contents to your bank before the loot is distributed to the PKer. This means any stacks of seeds in the seed box will be possible to be acquired as part of the bank key.

Song of the Elves: Rewards and Extras

We're proud to announce that everything from the first Song of the Elves poll passed in the polls, meaning the quest and main content will go into game this summer!

Now's our chance to go more in depth with the smaller rewards and features you would like to see from Prifddinas. A second poll blog will be posted soon with the top suggestions and ideas for minor content in the Crystal City. If you would like to get involved and potentially have your ideas made reality in Old School, get involved in the discussion on Reddit, Twitter, and the Official Forums.

You may remember that we decided not to poll Crystal armour in the first poll as you weren't happy with the final design (in terms of stats and set effect) and neither were we. To make sure we get it right, we're also holding a separate discussion on separate threads on Reddit, Twitter and the Official Forums. Alternatively you can email in your suggestions to [email protected] The deadline for all suggestions is Friday the 29th of March.