Today's update brings clickable options to the orbs near your minimap that show your health, prayer points and run energy. These options allow you to:

In addition to that, we've updated the Kalphite Queen, the King Black Dragon, the Chaos Elemental and the Dagannoth Kings to notify all nearby players of the loot they're dropping.

You can use the Report bugs here thread to send us your bug reports. 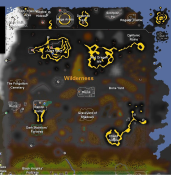 Mods Ash, John C & Reach have started working on the Wilderness Rejuvenation features for which you voted. That'll be in progress for a few weeks, and we'll launch it as soon as we can, hopefully in March if all goes well.

While that's going on, we'll be starting Poll #16. We won't be able to offer anything massive in this poll, since we've got a lot of Wilderness work to do, but we can fit in a handful of quality-of-life fixes and other feedback changes that you've requested. It will also contain the Nightmare Zone rebalancing changes we described in last week's blog.

We'll write up our plans for Poll #16 in a blog, hopefully to be published tomorrow, so you can read through the questions and give us your feedback before voting starts next week.

Our regular Thursday Q&A livestream takes place today at 5pm GMT on Twitch. You can send questions to Mod Mat K via Twitter before the stream starts, and we'll do our best to answer them in the stream.