Raids Improvements
This week's update sees some balancing tweaks to the Twisted Bow, as well as a whole host of QOL updates.

The Twisted Bow now also has a cap on the maximum damage buff it can get from the targets magic level, bringing it more 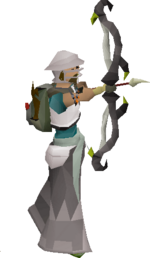 in line with its intended DPS on creatures with very high magic levels. The buff will now max out against a target with level 250 Magic. It is important to note that in this instance, accuracy has not been affected, only damage.

The Kodai Wand now has a 15% chance of negating the rune cost on an offensive spell cast. An offensive spell is categorised as any spell which sees use in combat, and as such will not work on spells such as High Alchemy.

In a minor usability tweak, Ancestral Robes may now be combined into a set at the Grand Exchange, to aid in the buying & selling of them.