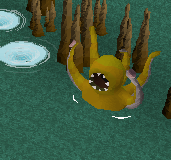 Today we introduce the first of our new Slayer monsters, Cave Kraken, even more Slayer Rewards and the first round of updates you voted for in Poll #15. 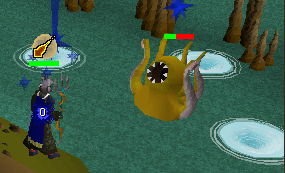 Requiring 87 Slayer & 50 Magic, Cave Kraken lurk within the lakes of the Stronghold Slayer Cave, meaning you must have an assignment to fight them; available from Chaeldar, Nieve & Duradel. You will want to use your best spells against the Cave Kraken as they are only weak to magic; but you may be rewarded with a Trident of the seas.

The Trident of the seas has a built-in magic spell and must be charged with 1 death rune, 1 chaos rune, 5 fire runes & 10 coins for each cast, holding a maximum of 2500 charges. The Trident is only tradeable in its uncharged and fully charged states and you can remove charges at any time, though the coins will not be refunded. On death the trident will expel its charges as runes, unless it is fully charged. The Trident requires 75 magic to use and deals damage based on your magic level; the spell can not currently be used on players, however we are open to polling a change to this mechanic if demand is high.

Four new channels have been added to the minigame grouping system; these are for finding Godwars & Waterbirth Island parties and Black Arm / Phoenix Gang members.

Over the next week we'll be working on the Orb functionality changes and make a start on the Wilderness Rejuvenation updates.

Tune in to our next Q&A livestream tonight at 5pm GMT. If you can't make the stream, you can tweet your questions to @JagexMatK beforehand.