Over the Christmas break we've prepared another batch of the Slayer updates for which you voted in Poll #13. Visit your Slayer Master to unlock the new abilities.

Like the black mask from which it is constructed, the Slayer helm gives you a 15% bonus to your melee accuracy & damage when fighting your assigned target.

If you construct a Slayer helm from an imbued black mask, the Slayer helm will automatically be imbued too. 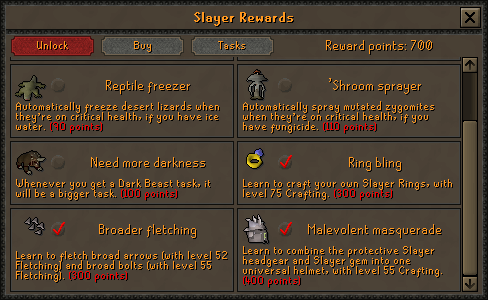 Fletchers can unlock the ability to make their own broad ammunition. Level 52 Fletching is required to make the arrows, and level 55 to make the bolts. The components are sold in the Slayer Masters' cash shop, either individually or in packs of 100. When this feature was released before, broad arrows offered a disproportionately high rate of Fletching XP. For OSRS, while the XP rate is still high, it's a little lower than in RS3.

More Slayer updates are already in development, with a new water-dwelling monster and the leaf-bladed sword in the pipeline. We'll be posting details as work progresses.

The Christmas holiday event is still open. If you haven't got your rewards from Shanty Claws, get on with it! We're planning to close the event later this week.

Over the Christmas break you've voted for a wide selection of features from Poll #14. We've started working on those already, including the Zamorak hasta, the Lletya fruit tree patch and Smith-X, and we'll hopefully be able to release a batch of them later this week.