Lurking deep beneath the Catacombs of Kourend lies Skotizo: an ancient demon that lay dormant for centuries, feasting on the intense power of the dark altar. 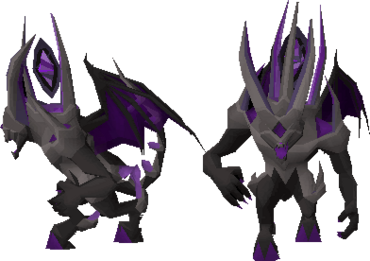 Skotizo is a demi-boss found in a cavern deep beneath the Catacombs of Kourend, accessed using a dark totem on the altar at the center of the catacombs.

Warning: Skotizo's lair is an instanced area. If you die you will lose all of your items. Any items left on the ground when you leave the instance will also be lost.

Once you enter Skotizo's lair, the fight will begin. Make sure you come prepared, as this demi-boss is sure to put up a fight. This demon has a particular weakness to the Arclight, making it a good choice of weapon.

If you are not already in possession of a hard clue scroll you are guaranteed one as a drop, alongside a guaranteed ancient shard. You also have a 1 in 50 chance of receiving an elite clue scroll.

On top of these rewards, Skotizo has a generous drop table. You won't find yourself walking away disappointed. There is even a reasonable chance of receiving another dark totem and being able to immediately return to fight Skotizo once more.

If you find yourself in trouble during the fight, you can find one-click teleports in each corner of the room. Just remember: once you leave you cannot return!

This time of year is troubling for druids. There are all sorts of evil spirits trying to do their worst to harm nature, so the druids in Taverley are doing their best to protect it. Unfortunately, they are having a few problems.

Head over to Hotpheex in Taverley to take part in the Midsummer Event. Over the next two weeks the Taverley druids are going to be needing a helping hand, so make sure you check back every day to take on the daily challenges. If you show some support, Hotpheex and his friends may want to repay the favour and reward you.

Participating in this year's midsummer event will grant you the rewards from previous years, as well as a brand new midsummer helmet.

To celebrate the upcoming release of our treasure trail expansion, we are running an event to challenge your clue-solving skills.

Over the course of the next four weeks we will be releasing four clues here on the forums. These clues will be solvable in game, allowing you to unlock one piece of a brand new set of cosmetic gear each week!

Once all four have been released, the information they provide can be combined to create a fifth, incredibly challenging clue. The first player to successfully solve this clue will be forever commemorated in game. All players who are able to complete the clue will also receive the fifth and final piece of equipment to complete the set.

The first clue will be going live tomorrow and we will be posting on our Twitter account, @OldSchoolRS, as the clue goes live.