This week sees the release of spellbook filters for desktop as well as some Bounty Hunter integrity changes.
Spellbook Filters

Ever since 2013, players have been proposing that we add filters to the spellbook like RuneScape had around 2011, allowing them to hide/show different categories of spell. Following the recent major spell infrastructure rewrite (see here for all the technical details) we’re now able to add this to the desktop game.

Following the results of the recent poll, spell icons will not resize when filters are applied as they do on mobile. 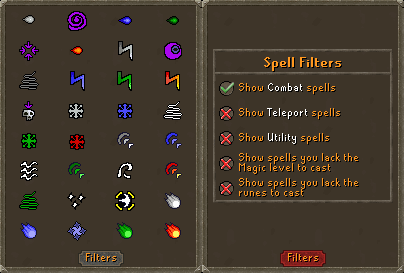 As we continue to prepare for the larger scale Bounty Hunter rework, some overall Minigame integrity improvements as detailed in this blog have been made.

These changes are intended to ensure players can find targets with a similar level of wealth risked without getting stuck waiting to be able to skip another target.

The 2 minute timer that ticks down whenever a player leaves the Wilderness with a Bounty Hunter target will continue to tick down for an extra six seconds whenever the player re-enters the wilderness. This change should reduce players' ability to grief their target by making them wait for their target to be lost or skipped.