As the time for Fossil island's release draws near, we've taken a close look at the swampland on the island, where a piece of content originally designed to introduce swamp-related items has the potential to be a new and viable training method for Woodcutting. In order to do this however, we'd have to raise its current nominal XP rates, so we'd like your opinion on the matter first! 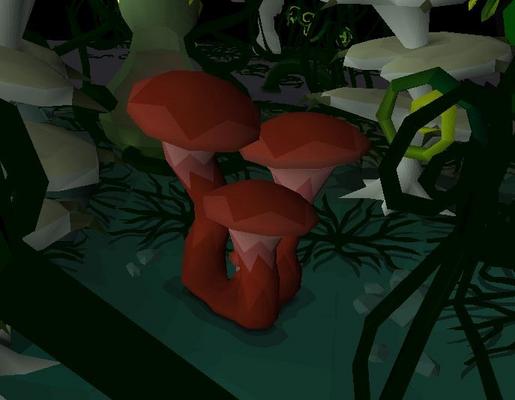 Sulliuscep mushrooms can be found in the swampland of the island. Requiring level 65 Woodcutting and access to Fossil Island to chop, a player will receive bittercap mushrooms as opposed to logs when chopping them. There’s a small chance to obtain Mort Myre fungi and a rare chance of obtaining a new Sulliuscep cap.

This mushroom cap, similar to the Golovanova fruit top, can be used to make a Mushroom pie that, when eaten, will give a +4 Crafting boost and will require 60 Cooking to bake.

A total of six Sulliuscep mushrooms can be found in the swamp. Unlike normal trees, mushrooms have unique root systems! Only one of the six mushrooms can be chopped at a time. Once the mushroom falls, another respawns somewhere else in the swamp. This is based on a player variable; as such, hopping worlds will not manipulate this.

The swamp itself is a dangerous place; you'll likely have to deal with some unique critters as you traverse it, to avoid getting hurt. If the Sulliuscep mushroom is in a particularly dangerous area that you just daren't hang around, you'll be able to make a special kind of fungicide to clear that mushroom and move onto the next one. A large part of this content is the interaction and traversing of the swamp. No standing still on one mushroom for too long!

Our hope for the content is to fill in the gap found in within Woodcutting between Willows, teaks and Redwoods – providing a faster training method than that Willows offers, but less speedy than what teaks can offer with tick manipulation methods.

As always, please head over to the forums to share your feedback on anything mentioned in the blog, so we can adjust the questions and hopefully open the poll tomorrow.