To build upon the recent Hosidius rework and increase the richness of the continent, Mod West included a Hosidius Dungeon in his original Hosidius Rework blog. Since then, Mod Husky has worked on the design. Now called the Forthos Dungeon, it is almost ready to be polled. Here is that design - let us know what you think! As usual, we will adjust the content and poll questions based on your feedback. We are expecting to bring the Forthos Dungeon to poll in the coming weeks.

In response to feedback, the following changes have been made to the blog:

All images and the GIF are works in progress and subject to change. Appearances may differ by the time of release. 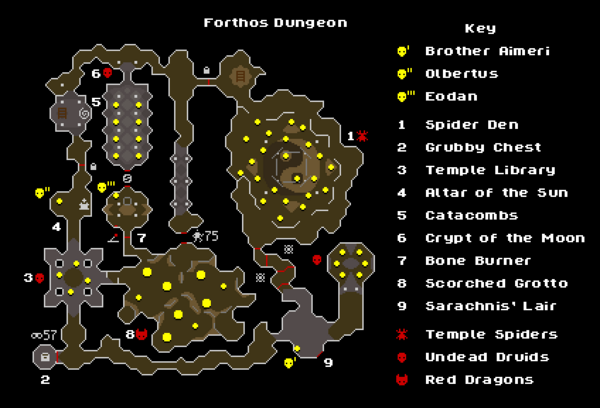 The Forthos Dungeon can be found below the Forthos Ruin, a new area created as part of the Hosidius Rework. There will be two entrances as shown in the picture below. We would also reroute the catacombs entrance which currently leads to the giant sand crabs to the western entrance of this dungeon instead. This shortcut must be accessed from the inside before it can be used both ways, the same as how it currently works. 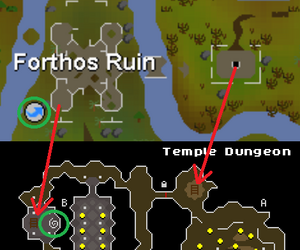 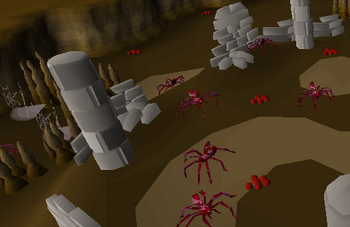 The first large room that lies within the Hosidius Dungeon is a large multi-combat red spider nest that contains twenty one temple spiders. These are a more powerful species of red spider (level 75 Combat) with an improved loot table. They will also be assignable as a Slayer task in this area by Konar. Adventurers brave enough to enter the den will find an abundance of red spider egg spawns (10) as an alternative to collecting them in Edgeville dungeon.

In the room to the south you will find an injured monk called Brother Aimeri who, once healed to full health, will give valuable information about the dungeon. 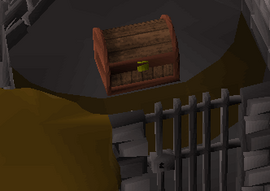 At the end of a long corridor is a locked gate that can be picked with 57 Thieving. Behind the door lies the Grubby Chest, requiring a Grubby key to unlock. Grubby keys will be uncommonly dropped by creatures throughout the dungeon. The chest contains an assortment of supplies and treasure, averaging 40,000-50,000 gp in value. The supplies will help you survive in the dungeon - working similarly to the Muddy key and Muddy Chest in the Wilderness Lava Maze.

North of the Grubby chest is a library. This room contains 4 undead druids and various bookshelves that can be searched for three tattered tomes. The pages to fill these tomes can be found by killing creatures within the dungeon. Once filled, these tomes will describe snippets of lore about the ancient religion practiced in the southern Kingdom of Varlamore as well as information about the ruined temple dungeon itself. Doing so is part of a miniquest described later in this blog. 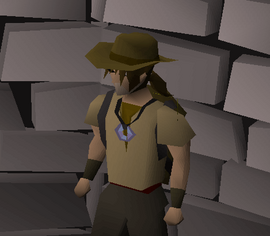 This room contains a mysterious NPC called Olbertus who has found a curious artifact and an altar for recharging prayer points.

This small, secret room was used by the druids to present their offerings to the gods. Adventurers will have to explore the dungeon and figure out how to access the secret entrance from within the Crypt of the Moon. Once in there, a lever can be pulled which will open a previously locked door north of the Scorched Grotto.

Eodan the Tanner has set up a small tanning stall in this chamber. While useful, he charges far higher prices than other tanners. However, this high cost can be reduced by completing tiers of the Kourend & Kebos Achievement Diary. In the centre of the small room is a bone burner. This can be used to sacrifice bones for three times the base experience of burying them. Players who appease the gods by burning enough bones here will earn the temple key. This can be used to permanently unlock doors within the dungeon to make traversing it much easier. This is designed to give extra value to anyone slaying the nearby red dragons without competing directly with existing Prayer experience rates from the Ectofuntus (4x), Gilded altar (3.5x) or Chaos altar (3.5x). 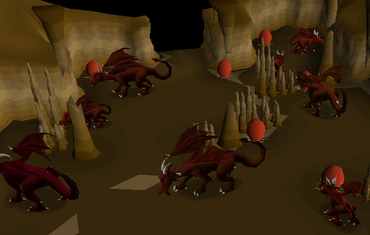 This large room contains six red dragons and five baby red dragons. The west entrance leads to the library while to the north lies a shortcut to the northern half of the dungeon that requires 75 Agility to navigate. There is also a corridor to the north-west that leads to the sacrificial chamber - but the door needs to be unlocked from the other side. This location will be added to Konar's list of potential assignments for slaying red dragons.

In Search of Knowledge: The Tattered Tomes 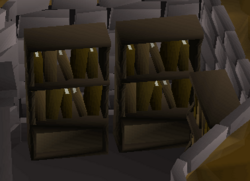 A new miniquest called 'In Search of Knowledge' will be introduced in the dungeon. Once healed, Brother Aimeri will tell you about three tattered tomes found in the dungeon library. Each can be filled with four pages which are uncommonly dropped by creatures within the dungeon. Once filled, the tomes can be handed into the Arceuus Library, rewarding you with information regarding a hidden burial chamber within the temple - now home to Sarachnis, the mother of the temple spiders.

Work in progress - let us know what you think!

Sarachnis is a brand new mid-level boss unlocked by handing in all 3 completed tattered tomes to the Arceuus Library. She is aimed at players around 100 combat who want to try their hand at bossing. At this level, players often try the Giant Mole, KBD or Barrows. However the learning curve from these bosses to high end PvM challenges such as raids is incredibly steep. To fill this gap, we want to offer the chance to learn how to deal with various combat mechanics while being appropriately rewarded.

Speaking of rewards, Sarachnis will drop a unique item: the Giant Egg Sac. This can be cut open for a large number of red spider eggs. Currently, these are usually obtained from the Nightmare Zone or the Tower of Life. A new spider boss offers a more fitting and engaging way of acquiring this resource. The number of eggs a player can obtain per hour will be comparable to the Tower of Life. This is intended to make up for removing red spider eggs from the Nightmare Zone reward shop.

For mid-level players, we expect gold per hour rates to be competitive with Barrows. High level players can expect to make more, scaling with their ability to kill the boss faster.

Sarachnis will have a high resistance to ranged and magic attack styles. For the slayers among you, killing Sarachnis will count towards both spider and temple spider slayer tasks.

Following demand for a unique drop in addition to the Giant Egg Sac, Mod Husky has proposed that Sarachnis could drop an item used to make a new crush weapon: 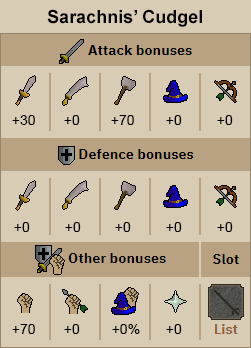 Requiring 65 attack to weild, this weapon will not compete with the Abyssal whip effectively based on its stats but will be useful against Sarachnis herself, given her low crush defence. This would not be better than the Zamorakian hasta - an intentionally more powerful crush weapon.

Alternatively, Sarachnis could drop a sliver of her web to be used as a bowstring on Dark bows. This would allow them to attack one tick faster than they currently do. This would mean dropping from 9 ticks to 8 on Accurate and Longranged styles and from 8 to 7 ticks on Rapid.

Let us know what you think about these ideas! Any additional unique item would be polled as a separate question.

The expected poll questions are found below. These are subject to change based on feedback.

The following questions relating to the elven questline have been entered into the same poll:

Underground Pass is possibly Old School's most infamous quest. This stems from its lengthy and arduous nature. We want to maintain these aspects of the quest as they're an iconic rite of passage in the game. However to avoid unneccesary frustration, we'd like to make some changes to improve the quest experience. The main cause of frustration with the quest is having to essentially repeat the quest when continuing the questline.

We would like to add the shortcuts below to improve the gameplay experience of Underground Pass. 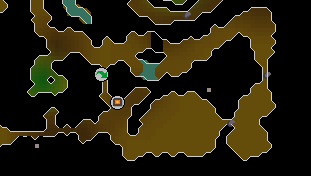 The large centre room at the bottom is the grid puzzle. 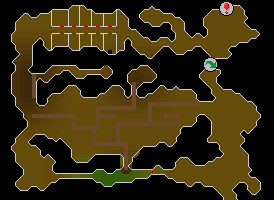 The large centre room is the Agility maze.

Thorgel's list of 50 items required to obtain a Death talisman and complete the quest is unnecessarily long. As this method is seldom used, we'd like to reduce it to these 12:

We'd also like to make the below change to prevent players having to rotate the mirror while Runecrafting at the Death altar. This change would not make Mourning's Ends Part II easier.

We'd also like to poll the following two questions to add an extra reward and to streamline the elven questline: